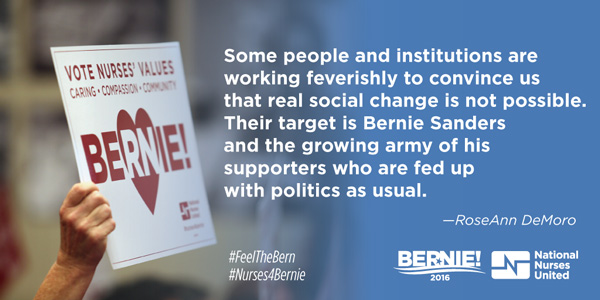 National Nurses United today condemned what it called “the latest blatant effort by the Democratic National Committee to rig the primary process” in its decision to bar the campaign of Sen. Bernie Sanders access to a critical master list of Democratic voters.

Nurses will join a protest later today outside the Florida district office of DNC Chair Debbie Wasserman Schultz that is expected to occur at 4:30 p.m. ET at 10100 Pines Blvd., in Pembroke Pines, Fl.

The decision by the DNC, said NNU Executive Director RoseAnn DeMoro, “continues an anti-democratic pattern by the DNC to derail the growing grassroots momentum of the Sanders campaign and the millions of Americans who support it.”

“What the DNC should clearly understand is they are playing a very dangerous game. Their cynical effort to stack this process could well turn off millions of voters who they will need to win an election next November,” DeMoro said.

“The DNC should immediately reverse this blatantly partisan decision. We need a fair election, not a coronation,” DeMoro said.

Earlier this week, DeMoro authored a commentary in Huffington Post in which she warned of “people and institutions are working feverishly to convince us that real social change is not possible.” http://www.huffingtonpost.com/rose-ann-demoro/dont-let-them-gaslight-th_b_8808480.html

No matter what, DeMoro added today, “they will not stop the mobilization of Sanders’ supporters and the aspirations of millions for a fundamental break with Wall Street and the corporate interests who have for far too long dominated our political and economic system,” DeMoro continued.

Most immediately, NNU members will be out in the streets of Manchester, N.H. Saturday morning and participating in a rally later Saturday in advance of a Democratic Presidential debate scheduled for Saturday night (details below).

“The DNC decision to hold a debate on the Saturday night before Christmas, at a time when they know far fewer people will be watching is one of multiple indications that the DNC is determined to hold stack the deck for their preferred candidate and will do whatever they can to engineer the electoral process on her behalf,” DeMoro said.

DeMoro also noted the decision of the DNC, quietly reported earlier this year, to reopen its national convention to corporate sponsors, “part of an overall recognition of its long-term allegiance, like their Republican counterparts, to Wall Street and corporate America, ties that are threatened by the Sanders campaign and his big army of supporters.”

Details on Saturday’s NNU canvassing and rally in Manchester: