Nurses and Veterans to Rally in Washington, D.C. to Protect Veterans’ Health Care at the VA 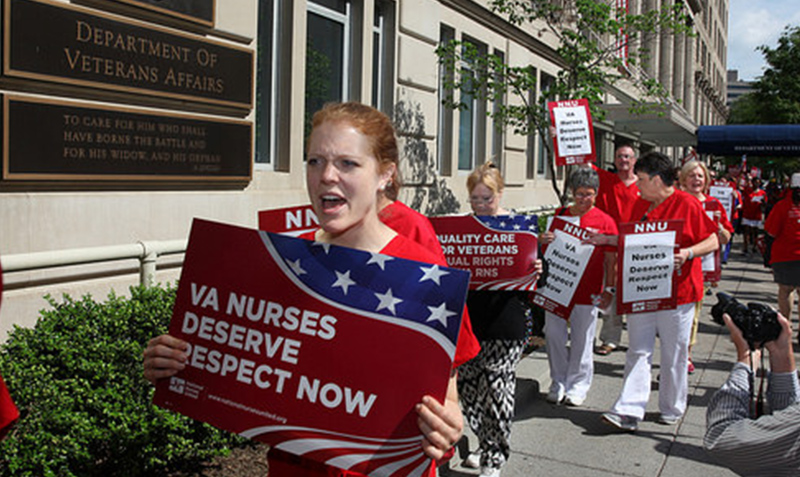 Cite Secretary Wilkie’s Failure to Fill 49,000 Staff Vacancies as a Deliberate Attempt to Undermine the VA and Deny Services to Veterans

RNs and veterans with Vietnam Veterans of America are holding a rally to demand that Congress and Secretary of Veterans Affairs Robert Wilkie work expediently to provide the VA the funding and staff necessary to ensure the highest quality of care for our nation’s veterans and to restore full labor protections to nurses, said National Nurses Organizing Committee/National Nurses United (NNOC/NNU).

“Study after study shows that health outcomes are better in the VA than in the private sector, even as the care is more cost efficient. This means the same dollars spent in the VA can provide many more veterans care than in the private sector,” said Irma Westmoreland, RN and NNU board member. “As nurses, we have the responsibility to advocate for our patients, and we can do that best when we are supported by a strong union. We know that a strong union means strong nurses, and that means strong vets.”

What: Rally — Protect Veterans’ Health Care at the VA

Following the rally the nurses will make the rounds on Capitol Hill to call on lawmakers to support a package of bills nurses champion: the VA Employee Fairness Act, the Workplace Violence Prevention for Health Care and Social Service Workers Act, and the Medicare for All Act of 2019.

Nurses and veterans are calling for:

“The nurses are fighting boldly against privatization, which would abandon veterans to a fragmented health care system that is not prepared or capable of caring for the unique and complex medical issues veterans face. It is no doubt because of their fight on behalf of the vets that the nurses have become targets of vehement union busting,” said Rick Weidman of Vietnam Veterans of America, and a former army medic. “As veterans, we stand with nurses and, united, we will win this fight.”

“Veterans have complex conditions that require specialized care,” said Sadie Hughes-Young, RN. “We have an obligation to these veterans. Just as we pull another chair up to the table when a new family member comes along, so should we be adding services, not diminishing services to care for our own veterans. This is the promise we made to them and this is a promise we as nurses vow to uphold.”