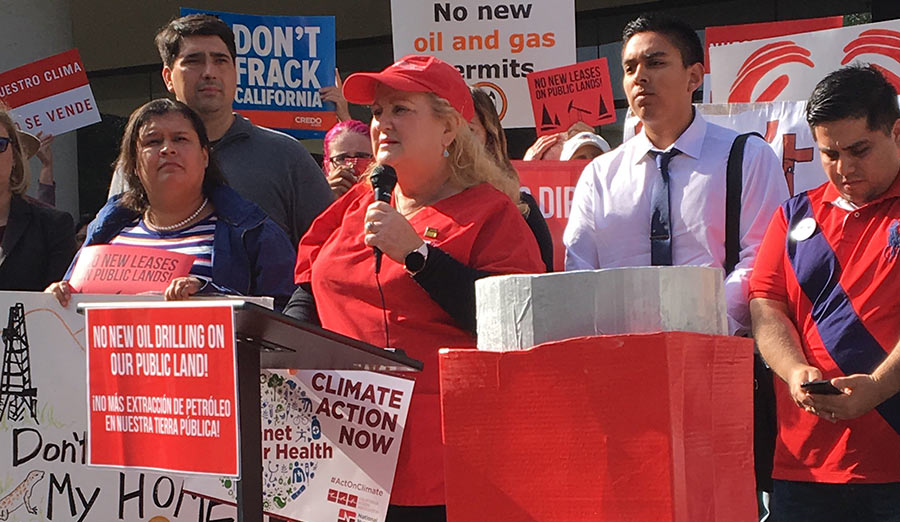 Registered nurses know that their patients’ health is not simply determined by taking this pill or getting that surgery. As holistic healers, nurses know that the air their patients breathe, the water they drink, the housing they live in, the jobs they hold, and the environmental toxins they are exposed to all ultimately shape their health conditions. As a result, RNs know one of the most pressing goals for our society and to fight the earth’s climate crisis is to rapidly transition away from relying upon fossil fuels as our main energy source.

California Nurses Association nurses in June stepped up their advocacy to do just that.

In Southern California, nurses teamed up with doctors and environmental and health care activists under the Stand Together Against Neighborhood Drilling (STAND – LA) project to lobby the Los Angeles City Council to publicly support a 2,500-foot buffer zone around all oil pumping rigs and centers in and around the city, which would essentially ban oil drilling in some of the city’s most socioeconomically depressed and polluted neighborhoods. Los Angeles is the nation’s largest urban oil field, and oil wells near residential communities have been linked to health effects such as nausea, headaches, nosebleeds – and even cancer.

Under the leadership of Los Angeles Metro Council RNs Tveen Kirkpatrick, Irma Dufelmeier, Bill Lufkin, and Fernando Bravo, nurses and their allies met in person with three councilmembers and made important headway in securing the support necessary for the ban.

“We have a great group of nurses and doctors doing the good work of environmental activism in our community,” said Kirkpatrick, chair of the metro council and an RN who works at Keck Hospital of USC. “We definitely made our presence felt. I look forward to continuing this fight and bringing an end to oil drilling in Los Angeles.”

In California’s Central Valley, also home to numerous fossil fuel extraction sites, CNA Board Member Sandy Reding, RN, made the case outside a meeting of the federal Bureau of Land Management against a proposal to open up more public lands to fracking and oil drilling. “Kern County has some of the highest asthma and air pollution rates in the country,” said Reding. “In some areas, the water is not suitable for drinking. As a nurse serving the community for over 30 years, we cannot have fracking. It’s problematic for the health and safety of our community.”