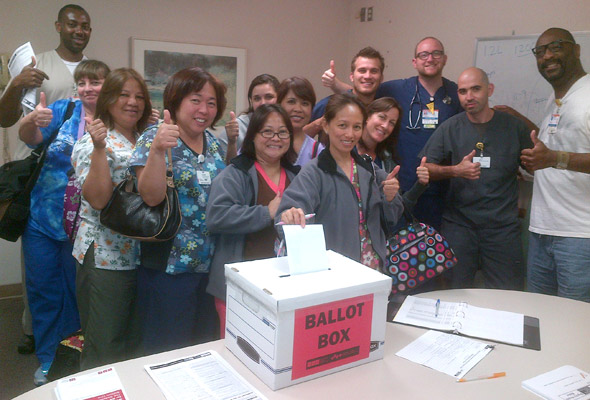 Registered nurses at one of the nation’s largest hospital systems, Dignity Health, have reached a major new tentative collective bargaining contract covering some 12,000 RNs at 28 Dignity hospitals in California and Nevada that nurses say is a sharp break from a concessionary spiral so prevalent among many employers in healthcare and other sectors.

The power of the 12,000 RNs at so many hospitals in diverse communities, and the decision of Dignity to respect the nurses, their union, and seek a path of accommodation, rather than confrontation, were key to successful negotiations and the agreement, said NNU today.

At its center, the agreement guarantees no reduction in health coverage, expands guaranteed pensions and retiree health benefits, and establishes a dramatic new “RN Accident Prevention Program” program that NNU says is the first in the nation by a major hospital system that provides unprecedented supplemental insurance protection for nurses injured in workplace violence or by needle stick accidents.

“At a time when nurses and other American workers are facing an all out employer assault on health coverage, retirement security, wages and workplace rights, and RNs are struggling to maintain their ability to be effective advocates for patient protections, this agreement is a seminal achievement that should resonate throughout the healthcare industry,” said NNU executive director RoseAnn DeMoro.

“Dignity RNs have set a national model for protecting both their patients and their own security, and building on a promising future for their own families. What a contrast with other employers and their CEOs. Some of them, like Sutter, neighbors of Dignity hospitals in the same communities are more intent on driving down standards for nurses and patients in pursuit of squeezing out ever more profits than on reaching a fair agreement that respects the concerns of the nurses, their collective voice through their union, and their patients,” DeMoro said.

“Nurses around the nation will look at this agreement, especially the RN Accident Prevention Program with appreciation for the forward approach to protect dedicated nurses, their communities, and their patients. I could not be more proud of the unity and dedication of the Dignity RNs to achieve this monumental program,” DeMoro added.

“We are so pleased to win a special protection plan to secure nurses’ future should they be injured by workplace violence. The nurses at my facility will be very pleased with the agreement,” said Carole Koelle, RN at Dignity’s St. Bernardine Medical Center in San Bernardino.

While Dignity hospitals, say the RNs, have not experienced the problems with workplace violence that have become prevalent at some other hospitals, “this agreement shows vision and a commitment by the hospitals to assure the highest degree of safety for our patients, their families, and the staff,” said Lorna Gunderson, RN at Dignity’s Dominican Hospital in Santa Cruz.

“Dignity Health RNs came together from California and Nevada to achieve common goals to secure established contract gains, and further improve patient safeguards,” said Bakersfield Memorial RN Sandy Reding. “In the current environment of corporate takeaways, our nurses’ strong resolve, coupled with the willingness to take the steps necessary to preserve and improve our contract standards, was effective. Strong contract provisions attract the best nurses and allow us to provide the highest quality of care for the patients in our communities.”

"With a solid contract in place, we are able to continue to deliver excellent, safe, patient care to those people in our communities,” said Mary Albert, an RN at St. Mary Medical Center in Long Beach. “In answer to the nursing surveys, we have accomplished our goal to maintain health care, increase retirement, pension plans and health savings accounts for our RNs.  Our patient ratios are solid and patient safety issues continue as our top priority.”