National Nurses United Statement on the Shooting of Jacob Blake 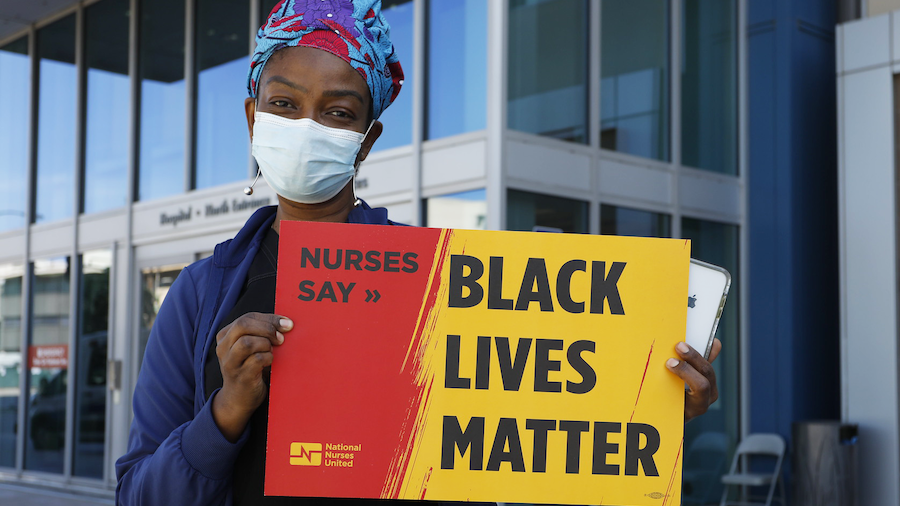 National Nurses United (NNU) today joined with labor, community, and social justice activists in the demand for racial justice following the police shooting of Jacob Blake, and the killing of two protesters in Kenosha, Wis. by an apparent white supremacist in the aftermath of the incident.

NNU also praised the national strike by a number of professional athletes and teams in the NBA, WNBA, and Major League Baseball who “have shown national leadership in their call for more effective changes to confront structural racism in policing and other areas of American society,” said NNU Executive Director Bonnie Castillo, RN.

In a social media post yesterday, Castillo called the Blake shooting “another life forever impacted by senseless police violence. Nurses are committed to healing and compassion. We call for #JusticeForJake, and an immediate end to police terror. #BlackLivesMatter.”

“Nurses know that racism, police, and white supremacist violence is a public health crisis. It is not only devastating for those permanently injured, like Jacob Blake, or killed, but also inflicts long-term physical and mental harm on their families and communities,” said NNU President Jean Ross, RN. “As a society, we all have an obligation to work to stop this epidemic.”

“We know that our patients’ health is not only determined by what happens when they encounter the health system, but largely by the social determinants of their lives in our wider society,” said Castillo. “And we must all be dedicated to the defense of Black lives in response to police brutality and other injustices that leave so many of our patients and community members struggling to survive in a society built upon racist institutions and structures.”

It was just three months ago that the police killing of George Floyd in Minneapolis sparked weeks of protests for racial justice.

Those mobilizations “have provided a welcome focus and national urgency for all of our people to come together to dismantle structural racism and reimagine a society premised upon racial, social, economic, gender, and environmental justice. Until we do, our patients and our communities will not be able to achieve and maintain the optimal health we wish for them, and sometimes, simply, to hold onto life,” Ross added.

In response to those actions, NNU elected leaders voted to call for comprehensive, systemic changes in policing practices, including deescalation methods to limit the use of deadly force, ending racial profiling, stronger disciplinary enforcement for police violence and other misconduct, and greater independent public oversight and accountability.

“As nurses, as practitioners of therapeutic healing and recovery, whether at the bedside, or in our communities, we are compelled to speak out when we see the violation of human rights and the pain and suffering from police violence and other discrimination and injustice that grievously harms our Black neighbors and communities,” Ross said.

Castillo also urged an end to incendiary rhetoric about “Democratic-run cities being overrun by mob violence,” threats to suburbs, and “similar corrosive language that only serves to inflame armed vigilantes, such as the apparent shooter in Kenosha,” said Castillo.

“This is a calamitous moment for our society. It is long past time for all of us to act, to end the structural racism that is such a threat to our common humanity and the future of our nation,” Castillo said.