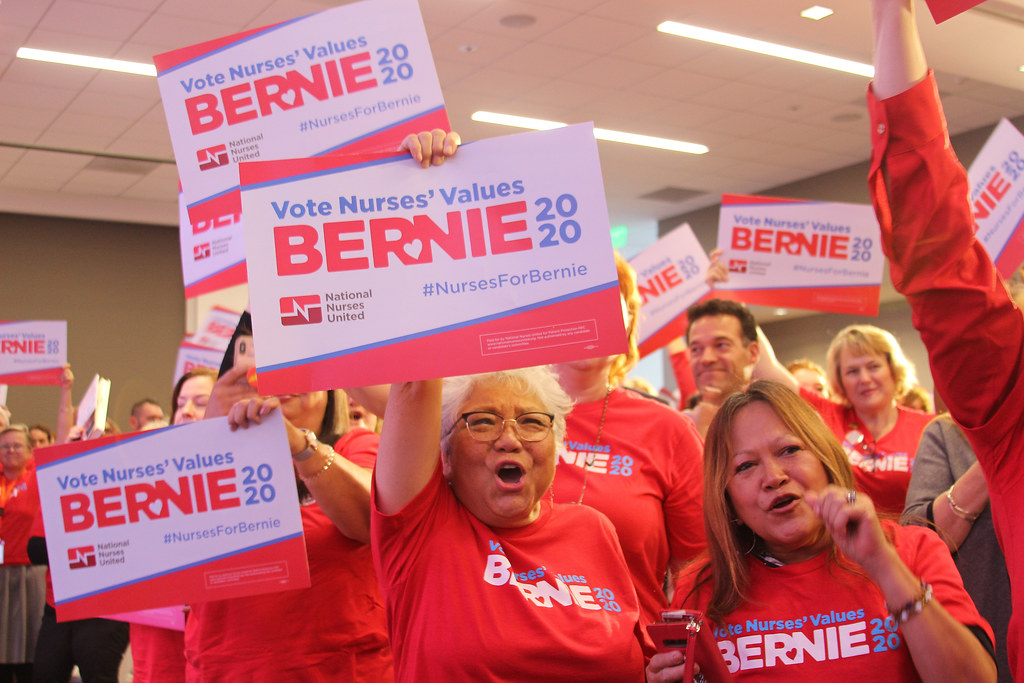 “The people of New Hampshire have spoken, and nurses are so moved to know that their support is with Senator Bernie Sanders,” said NNU Executive Director Bonnie Castillo, RN. “No one better embodies nurses’ values than Bernie. His platform is the strongest on protecting workers and strengthening the labor movement, he has stood by nurses’ side for decades in the fight for Medicare for All, and he is the only candidate who is building a grassroots movement to win on the issues that matter most to working people and families across America.”

“I canvassed in New Hampshire with my fellow Maine nurses, and the support for Bernie was through the roof,” said NNU Vice President Cokie Giles, of Bangor, Maine. “At one house, there was an older couple, and the woman was raising her fist in the air for Bernie. His platform really speaks to all generations and all walks of life.”

In addition to leading all the candidates on protecting workers and on Medicare for All, nurses say the New Hampshire results show the popularity of Sanders’ other progressive policy proposals, including his call for a Green New Deal; for climate, environmental, racial, and gender justice; for college for all and cancelling student debt; and for immigration reform.

Nurses in states with upcoming primaries say the New Hampshire vote also paves the way for a strong win for Sanders in their state.

“The nurses of El Paso care for the border community in the middle of Chihuahuan desert, and it’s our duty to help and heal all people—including our asylum-seeking patients. We are thrilled that New Hampshire set the stage for Texas to back Bernie in our March 3 primary. Nurses know that he is the candidate who will stand up for our American values to treat refugees and asylum-seekers with compassion and humanity,” said Tishna Soto, RN, of El Paso, Texas.

“Bernie’s New Hampshire win bolsters California nurses to keep canvassing and phone banking in the Golden State, so we can see him win here on March 3,” said NNU President Deborah Burger, RN, of Santa Rosa, Calif. “The devastating wildfires our state has experienced in recent years have resulted in the loss of lives and homes of patients and nurses, and sickened people with toxic smoke. We know these deadly fires are fueled by the climate crisis, and we need President Bernie Sanders to pass a Green New Deal now. Nurses thank New Hampshire voters for getting us one step closer.”

“Nevadans are ready to build on the momentum from Bernie’s New Hampshire win,” said Kari Deton, RN, of Las Vegas, Nevada, ahead of the state’s Feb. 22 caucuses. “Eleven percent of people in Nevada have no health insurance at all. Our patients—and patients across this country—shouldn’t have to face death just because they are priced out of preventative care. We need Medicare for All, and Bernie is the candidate to get it across the finish line!”