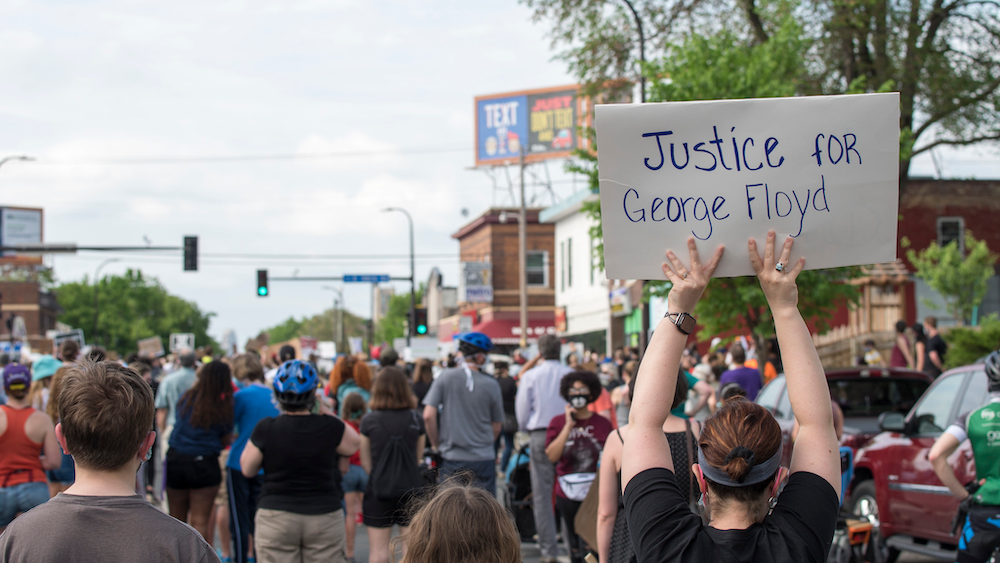 In the wake of the latest police killing of an African American man in Minneapolis, National Nurses United joins those calling for systemic reform on the use of deadly force by law enforcement agencies, and increased review of discriminatory practices that infer a racial bias.

George Floyd died Monday night while handcuffed after a police officer kneeled on his neck for at least seven minutes despite protests from observers that his life was in jeopardy and Floyd warning “I can’t breathe,” a reminder of a similar police killing of Eric Garner in New York in 2014.

In a statement Tuesday, the Minnesota Nurses Association, an NNU affiliate, noted:

“As nurses, we see the horrific effects of racism in our hospitals and community every day. We cannot remain silent as yet another black man has died at the hands of police. In a hospital or clinic, when a person says ‘I can’t breathe’ they are immediately swarmed by medical professionals who triage the situation and treat them immediately. They work hard to save lives. In the case of George Floyd, Minneapolis Police took no care or life-saving measures. Instead, they left him pinned down to the ground until paramedics arrived. Police ignored the pleas of George Floyd and he died.

“Nurses care for all patients, regardless of their gender, race, religion or other status. We expect the same from the police. Unfortunately, nurses continue to see the devastating effects of systematic racism and oppression targeting people of color in our communities. We demand justice for George Floyd and a stop to the unnecessary death of black men at the hands of those who should protect them.”

NNU echoes those remarks, said NNU President Jean Ross, RN, a Minnesota resident. “Nurses know that racism is a public health crisis, whether in societal practices that have contributed to the disproportionate COVID-19 deaths of African Americans or the deaths of African Americas at the hands of police. It is incumbent on all of us to work for systemic change.”

Dating back to 2014, following the police shooting of Michael Brown, an unarmed African American teenager in Ferguson, MO, NNU said, “as advocates for their patients, and practitioners of therapeutic healing and recovery, whether at the bedside, or in our communities, registered nurses and NNU are compelled to speak out.”

Nearly six years later, Ross said, the death of black men and women at the hands of police continue to be a national scourge that “must be addressed with comprehensive reforms that recognize the violation of human rights and calamitous effects on health, safety, and security of the entire black community across the U.S.”

Those reforms, said Ross, should include national policy standards, rigorously enforced by public oversight, “to reign in what has become a Wild West use of deadly force, as a first resort rather than the last step in policing practices, especially against unarmed black men and women.”

De-escalation when possible, with regular training and enforcement, “will help build public trust with affected communities which is essential to public safety,” Ross added.

That should be augmented, said Ross, by other reforms, as outlined in a 2014 letter by the AFL-CIO and dozens of members of Congress, faith and community leaders, that was endorsed by NNU, calling for racial bias training of law enforcement personnel, national standards of investigation including community review boards, and improved diversity in hiring and retention.

The death of George Floyd should also be viewed in the context of other recent killings of African Americans, including emergency medical technician Breonna Taylor, in her home by Louisville police, and Ahmaud Arbery, murdered while jogging by white supremacist vigilantes.

Even in the midst of a pandemic, societal racism continues to be a national plague, says NNU. That is seen in harassment and threats of Asian-Americans targeted by those blaming them for the virus, racist signs carried by some of those protesting sheltering policies, as well as disproportionate COVID-19 deaths of African Americans, Latinos and Native Americans.

At its NNU Convention delegates in 2018, NNU members cited “the pervasive problems of racial, economic, and social injustice that have so stained our nation and undermined the promise of democracy” and re-emphasized that “as nurses, we are dedicated to prevent all forms of illness, protect health, and alleviate human suffering.”

The resolution pledged NNU to continue to champion “patient advocacy beyond the bedside” by partnering with organizations and communities of color as part of our work to build a wider movement that will fight for a society that cherishes and celebrates our rich diversity.”