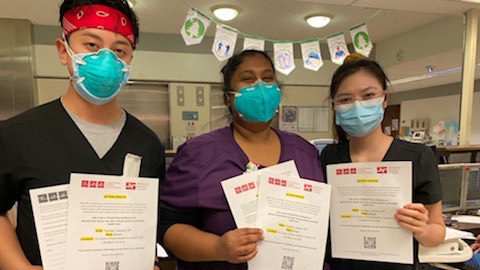 The commission passed the resolution without dissent at a public hearing Wednesday on the closure at which registered nurses, firefighters, community members, and a number of the commissioners warned of disastrous consequences if Alecto Healthcare Services, the operator of Olympia, goes forward with plans to close the hospital by Mar. 31.

UCLA Health has purchased the property on which the hospital sits, but has not made a commitment to maintain Olympia as a full-service hospital, and did not send a representative to the public hearing.

Closure, emphasized Olympia RN Shenita Anderson, “will mean an increase in unnecessary deaths.” She warned it will cause adverse harm to seniors, low-income, homeless, and Black and Brown residents who are a high percentage of Olympia patients. Many of them “won’t know where to go” and “won’t get the timely care they need.”

Olympia executive vice president Michael Sarrao claimed the decision to close was based on slightly declining numbers of patients and paramedic transports, which brought sharp rejoinders from a series of speakers, blasting Alecto for ignoring the pandemic crisis.

“Alecto should not be in the hospital business if all they care about is money,” said Olympia RN Belma Hartano. “If Alecto is not going to keep the hospital open, we have to tell UCLA they have to operate the hospital.” Several commissioners also called on UCLA and the UC Board of Regents to step in.

Wendy Macedo, an RN who works in a Covid unit at UCLA Santa Monica Medical Center, noted UCLA is “already stretched beyond capacity” and would be further overwhelmed with patients who had formerly gone to Olympia if it closes. “UCLA needs to follow up on their responsibility to the community.

Officials from Los Angeles and nearby Culver City fire departments warned of dangerous delays in patient transport if Olympia closes. “We will see a large wave of disruption throughout the EMS system,” said Culver City’s Roger Braum. Patients will have to be transported farther with “greater wait times” with a “decrease in the number of ambulances and paramedics” available “throughout the system.”

“It’s a long ways (on always crowded streets) in Los Angeles to drive five miles to the next hospital,” added Commissioner Carol Meyer.

Several neighborhood community members also spoke out in opposition to the closure. Conrad Starr of the Greater Wilshire Neighborhood Council noted preparedness goes beyond the current pandemic as well, such as in a major earthquake. “We need to be preparing added capacity,” not less, he said.

“With many people dying every day” due to Covid-19, “closure is insane. We’ll have more people die because we don’t have ICU beds,” said Brad Kane, a member of the Pico Neighborhood Council.

Jim Lott, former executive vice president of the Hospital Association of Southern California, repeatedly questioned the business decision to close the hospital when “this is happening in the most horrendous times of our lives.” Endorsing the resolution, he added, “we need to go beyond business decisions [and prioritize the] public health interests of the community we serve.”