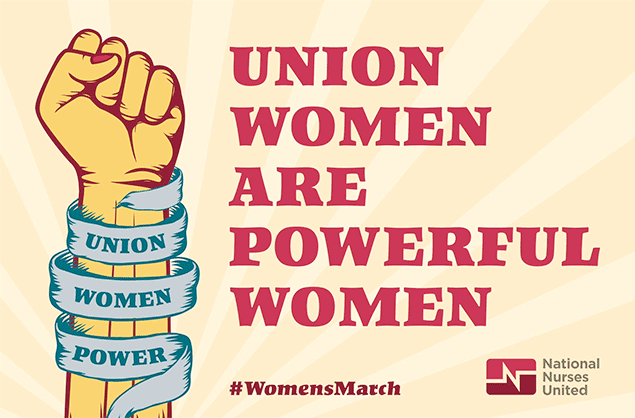 On Jan. 19, registered nurses from National Nurses United (NNU), the largest union of RNs in the country, will converge at Women’s Marches across the United States to highlight the importance of unions to women and working people, NNU announced today.

“As proud union nurses, we know that the collective voice and protection of our union is what enables us to freely and fiercely advocate for our patients,” said NNU Executive Director Bonnie Castillo, RN, who will be attending the Washington, D.C. Women’s March with a contingent of NNU nurses.

“The power union workers build, through the strength of our numbers, perfectly aligns with the power women and allies across the country build when we come together to march. On Jan. 19, and every day, nurses stand not only with other women workers—including the teachers, the hospitality workers—but with all working people across the country, who are protected and empowered when they form unions.”

As a women-dominated profession, nurses say one of their main messages at the Women’s Marches is how the pervasive, gender-based wage gap in the U.S. (also experienced within the nursing profession) can be best resolved by a union contract.

“We’re marching on Jan. 19 to say that we can’t have equality in society without the critical protections that unions provide for women workers,” said Jean Ross, a Minnesota RN and a member of the NNU Council of Presidents. “We know from experience that our corporate employers will not resolve the wage gap out of the kindness of their hearts. We have to be able to hold them accountable, and we do that through our union.”

Nurses say they are also marching in D.C. and at sister marches across the country to highlight the ways in which unions fight to ensure safe workplace conditions. For nurses, this includes rules against being assigned an unsafe number of patients, and protections against infectious diseases, sexual harassment, and workplace violence. NNU’s California affiliate, the California Nurses Association, recently won the strongest healthcare workplace violence protections in the United States.

“Workplace violence prevention is a critical issue—since nursing is still primarily a female-dominated career,” said RN Allysha Shin, who will be participating in the Los Angeles Women’s March with her baby daughter. “I see violence against nurses as violence against women.”

Because nurses deeply understand the dangers of America’s current broken health care system and carry on a long, proud tradition of advocating for social justice, they will also bring the fight for Medicare for All to the Women’s March. Nurses know that one of the best ways to improve the lives of women is to provide them and their families health security through guaranteed access to all levels and kinds of health care.

Shin adds that marching as a union nurse highlights nurses’ values and beliefs: that all people deserve to be treated with respect, dignity, and empathy regardless of ethnicity, nationality, immigration status, and socioeconomic status.

“I’m definitely marching for Medicare for All,” said Shin. “As a union nurse, I believe healthcare is a human right.”

National Nurses United is the largest union of registered nurses in the history of the United States, with over 150,000 members nationwide.