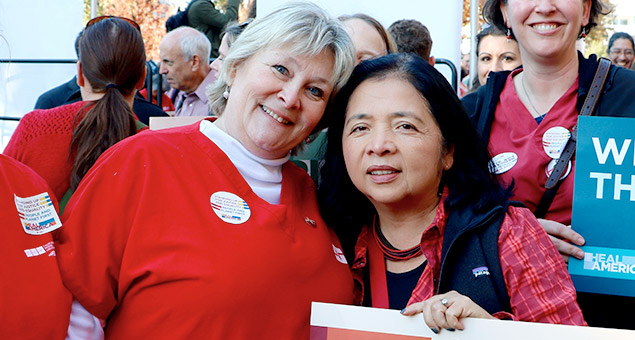 At The World Transformed Conference in Liverpool, RNs to call for new era of social change, warn against privatization

The RN union leaders will be calling for a new era of change and warning against the dangers of privatization of public social services.

“The commonality of our struggles is very clear: ours is to gain health care justice and yours is to keep it,” said Castillo. “In both our countries, all the institutions that serve the common good are under attack.”

The World Transformed political and cultural event grew out of the pro-Corbyn group Momentum and runs concurrently with the annual Labour Party Conference, Sunday – Wednesday (September 23 – 26).  Castillo will be one of the TWT keynote speakers at the main plenary on Sunday, along with Canadian author and activist Naomi Klein.

Ross will speak on Tuesday, about the nurses’ effort for a public health care system in the US, popularly known as Medicare for All. Given their commitment to advocate for their patients, said Ross, NNU nurses have led the way, for decades, in the fight for a just and fair healthcare system that includes everyone—and in making Medicare for All a hot button issue for U.S. elected officials.

“Every major contender for the 2020 Democrat Presidential nomination has had to embrace Medicare for All,” said Ross, who points out that the nurses have spent years waging legislative efforts at the state and federal level, knocking on doors, gathering signatures and generally playing a major role in advancing the U.S. public’s desire for Medicare for All.

“We are at tipping point in the U.S., and we have never been closer [to achieving Medicare for All], with unflagging support, even across party lines,” said Ross. “It’s a non-partisan issue. I cannot see the grassroots support receding at this point.”

During TWT, Momentum volunteers will also host a phone bank, calling people in California to talk about the success of the United Kingdom’s National Health System (NHS) and urging them to tell House Minority Leader Nancy Pelosi to support Medicare for All.

Privatization has become a central fight for both health care advocates in the U.S. as well as in Britain, say nurses, with the U.S. effort focused on achieving a system that provides health care free of charge and accessible to all, unencumbered by profit driven private insurance and with regulated costs. For people in the U.K. the threat of privatization of their National Healthcare System (NHS) is a significant concern.

“America’s nurses know the people of the U.K. must keep fighting to protect what they have, as continued attacks on the NHS seek to mask the same, old, tired issues we face here in the U.S.—underfunding by a government moving toward privatization,” said Castillo.

As they see a common enemy, Corbyn, Castillo and Ross also see a rising source of power to defeat privatization: mobilizing on a grassroots level, using the same organizing model that brought about extraordinary Labour Party victories in the U.K. in 2017, and brought the revolution in consciousness behind the power of the Bernie Sanders campaign in the US.

“It’s up to all of us to use our collective voice, and our willingness to take to the streets, to demand what is moral and just,” Castillo said. “And together, on behalf of patients everywhere, we will win.”