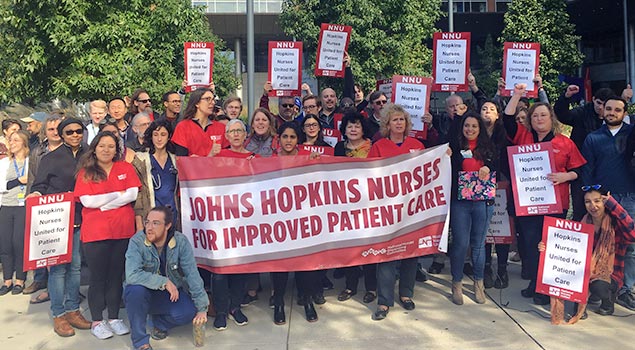 The National Labor Relations Board (NLRB) has determined there is merit to a third allegation that Johns Hopkins Hospital in Baltimore is violating federal labor law in restricting the rights of its registered nurses who are seeking union representation, the National Nurses Organizing Committee/National Nurses United (NNOC/NNU) announced today.

If Johns Hopkins officials refuse to agree to a settlement, the NLRB will issue a formal complaint against the hospital.

“We urge the hospital to live up to its own reputation by supporting nurses in our right to become even better patient advocates by forming a union,” said Janet Orlin, RN, Leukemia IMC. “The merit finding on this third allegation validates what RNs have been saying. Nurses are simply exercising our legal right to seek union representation, and management is acting unethically or unlawfully in trying to stop us. On behalf of our patients, we call on Johns Hopkins to do better.”

Regarding this most recent charge, NNOC said the Johns Hopkins management has created the impression of surveillance of protected union activity, which nurses say can have a chilling effect on organizing to improve patient care and staffing, as well upgrade substandard economic standards and workplace conditions.

“Nurses are organizing to better advocate for our patients, which is our legal right, and also, our moral right,” said Derek Jannarone, RN, Comprehensive Transplant Unit. “It’s unconscionable that management has spent so much money on professional union busters, trying to prevent nurses from strengthening our collective voice. Instead of investing millions in union busting, Johns Hopkins should be investing in patient care.”

Johns Hopkins nurses held a press briefing on October 31, about the initial allegations found to have merit, regarding the hospital engaging in illegal interference with RNs rights under federal labor law, according to NNOC. The hospital is waging an aggressive campaign, spending millions of dollars, NNOC alleges, on anti-union efforts, that appear to violate legally protected workplace rights.

“Nurses are organizing because a collective voice is what enables us to better advocate for safe staffing, for patient protections, for recruiting and retaining experienced RNs for the community served by Johns Hopkin,” said Madeleine Barab, RN, Cardiovascular Progressive Care Unit. “So these actions by Johns Hopkins management are not just disappointing for us nurses, but they are a disappointment to the wider community, and to all the patients who benefit from our care.”

“Johns Hopkins RNs are not going to be deterred. Nurses deal with stressful life and death situations every day; by nature, we are strong. But my colleagues and I should not have to be faced with intimidation and misinformation at work,” said Holly Bracher, RN, Medical Progressive Care Unit. “Our concern is simply providing the highest quality of patient care, and we call on the hospital to support its nurses, not to try to divide and intimidate us, as we organize a strong union to best provide that care.”