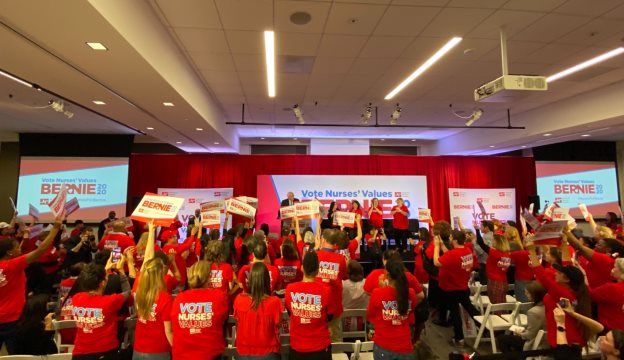 Sanders joined National Nurses United in Oakland, Calif. for a spirited launch of “Nurses for Bernie” 2020

National Nurses United (NNU), the nation’s largest union of registered nurses, officially announced its endorsement of Sen. Bernie Sanders for president of the United States today at the union’s Oakland, Calif. offices—and RNs from across the country were present to cheer on Sanders as their chosen candidate.

“Bernie, you truly are one of us,” said NNU Executive Director Bonnie Castillo, RN, highlighting Sanders’ long history of championing issues that nurses care about. “We know billionaires are trying to buy this election. Well, who takes on a billion-dollar industry every single day and wins? Nurses. Together with Bernie, we’re going to fight for the people.”

“Nurses are the backbone of the American health care system,” said Sanders, emphasizing that NNU members have shown courage in their longtime leadership of the grassroots Medicare for All movement. “You do fantastic work. That is why nurses are the most admired profession. Perhaps more than any other group in America, you understand the dysfunction and cruelty of the current health care system. You see it every day.”

NNU’s presidents told the crowd of cheering nurses that Sanders’ dedication to rebuilding the labor movement and protecting workers—as the chief sponsor of the Workplace Democracy Act and as a cosponsor of the Protecting the Right to Organize (PRO) Act—was central to the endorsement.

“Bernie knows our millionaire and billionaire CEOs will exploit workers with complete disregard for human rights, civil rights, or safety, and he understands that it’s union power — worker power— that keeps employers in check,” said NNU President Zenei Cortez, RN, lauding Sanders’ call for an end to “right-to-work” laws and at-will employment, and his vow to protect workers’ right to organize and bargain collectively for better wages, benefits, and working conditions.

According to the nurses, Sanders’ leadership in the fight to win Medicare for All, and his call for a Green New Deal for climate and environmental justice were also key in earning NNU’s endorsement.

“Nurses have been fighting to win health care as a human right, to win Medicare for All—for decades. And you know who has been with us all along? Bernie,” said NNU President Jean Ross, RN. “People shouldn’t have to choose between rent, food, and health care. That violates our values as nurses.”

“Here in the Bay Area, including in Sonoma County where I live, we can touch, feel, breathe and smell the climate crisis as it impacts our patients and our communities,” said NNU President Deborah Burger, RN. “We share Bernie’s comprehensive vision for a Green New Deal, and we know he will be a powerful champion and ally in making this vision a reality.”

NNU views the primary campaign as just the first step in what must be a year-long effort to defeat the disastrous policies of the present administration.

“We have seen how the current administration threatens the health and safety of our patients and the planet. To win fundamental social change for workers, patients, and our communities, it’s up to all of us to build the strongest possible broad movement, centered on the diversity of our nation. That will continue to be our foremost priority,” said Cortez.

Nurses say they know big change has always happened as a result of mass movements of everyday people, and they value Sanders’ dedication to grassroots organizing.

“Collective action gets things done; it’s the same thing union nurses see in our workplace, just at a larger scale. More so than any other candidate, Bernie Sanders is a movement builder,” said Castillo. “We know that on issues that matter most to nurses and patients, he is the leader who will continue to organize everyday people to fight for an equitable society.”

NNU is the largest U.S. union and professional association of registered nurses with more than 150,000 members from coast to coast. NNU’s elected RN leadership voted to make the endorsement following questionnaires sent to all the candidates on issues of concern to RNs, candidate interviews, and input from nurses.