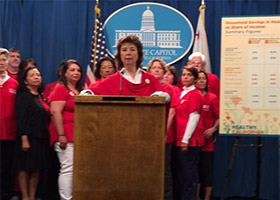 With a state Senate vote possibly imminent on a single-payer health system for California, supporters Wednesday released a study estimating it would cut spending on healthcare in the state by 18% and cost tens of billions of dollars less than the state's estimate for the plan.

Extra costs could be covered by tax increases, according to the analysis sponsored by the California Nurses Assn./National Nurses United, the leading supporter of legislation.

A legislative analysis had estimated the cost of the proposed system to be $400 billion annually, but a study released by the nurses Wednesday estimates the yearly cost would be $331 billion as of 2017.

The estimate was made by the Political Economy Research Institute at the University of Massachusetts Amherst, in a study partly financed by the nurses association.

State Sen. Ricardo Lara (D-Bell Gardens) authored a bill that would provide a Medicare-for-all-type system and said the study shows the plan can guarantee health coverage for all Californians without the out of pocket costs that leave a third of all state residents underinsured.

“The good news is that California can get a lot more for our money,” Lara said at a Capitol news conference. "Families will pay less for healthcare.”

The study estimated the amount spent on healthcare will drop up to 9% for middle-class voters who are currently insured, and 5% for low-income residents.

Senate Bill 562 is eligible for a vote by the state Senate this week, although Lara said he planned to meet with supporters on how to incorporate the findings of the new financial report into the proposal. The financial review proposes to cover part of the cost of the single-payer system with a 2.3% increase in both the state sales tax and its gross receipt tax applied to California businesses.

The new plan could use public healthcare revenue sources that are currently covering some 71% of all healthcare funding in the state, including Medicare, MediCal and tax subsidies for healthcare, said Robert Pollin, the institute’s director.

Polon was an economic advisor to Gov. Jerry  Brown’s campaign for president and Lara said he hoped his involvement would convince Brown to support the legislation.

If the state can obtain waivers in all of the present areas of public health funding, it will provide $225 billion of the cost of a single-payer program.

“That means that the remaining $106 billion to fund Healthy California will need to be provided by new revenue sources in the state,” the study says.

The rosy picture was disputed by Rick Coburn, president of the California Association of Health Underwriters, who said abolishing the use of options delivered by private insurance companies would increase unemployment.

To ease the tax burden, the proposal would exempt the first $2 million in receipts for all businesses, meaning companies that average up to nine employees will have no gross receipts tax obligation. The sales tax would exempt spending on housing, utilities and food at home.

“What this new study proves is that we can finally achieve the dream of guaranteeing healthcare for all Californians, without the punishment of crippling out-of-pocket costs," said RoseAnn DeMoro, executive director of the California Nurses Assn.

Meanwhile, the nurses association released a poll it sponsored that says 70% of Californians support the legislation and 58% remain supportive after hearing opposition arguments. The poll was conducted by the Tulchin Research firm, and involved the survey of 600 likely California voters.