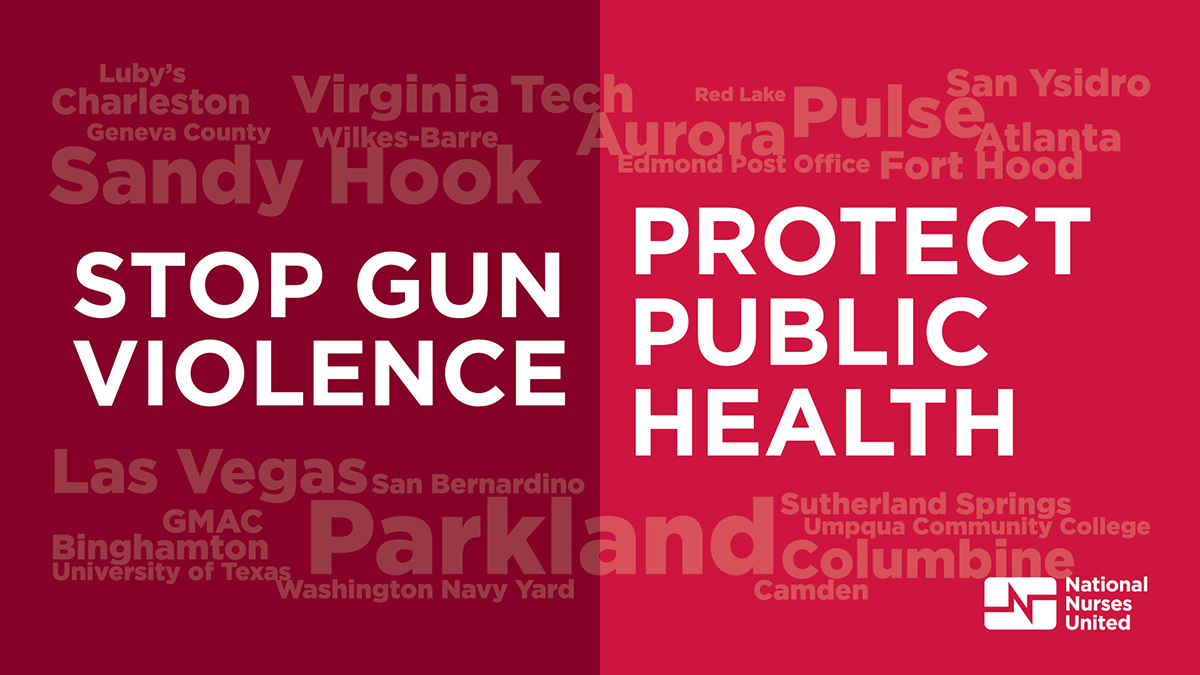 San Jose a Reminder of the Toll Essential Workers Have Faced

The mass murder that left at least 10 people dead -- nine transit workers plus their co-worker, the shooter -- in San Jose is the latest reminder of the unaddressed public health and safety crisis that has exacted a terrible toll from families and communities, and an added burden for essential workers who have already endured the worst of the devastation during the year of this pandemic, said National Nurses United today.

“We must take gun violence as seriously as any public health crisis that affects patients, their families, and all of our communities,” said National Nurses United President Jean Ross, RN.

“From our schools to churches to homes, no place in our nation is immune from gun violence,” said Ross. “Workplaces have been a particular target this year, as we’ve seen in Atlanta, Colorado Springs, Indianapolis, and now San Jose.” NNU has long advocated for federal and state workplace violence protection programs, such as an NNU-sponsored bill for health care facilities, H.R. 1195, that passed the House in April.

“As nurses who have endured enormous danger from infection and moral distress during the pandemic, we are particularly concerned for the families of all essential workers who have faced constant threats to their health and safety the past 14 months. Transit workers, including those in San Jose, have risked so much in the past year, and now to be a target of gun violence is unbearable,” added California Nurses Association President Sandy Reding, RN.

NNU expresses sympathy and solidarity with the Amalgamated Transit Union and ATU Local 265 in San Jose, which represents the affected workers. Contributions to their families may be made at https://act.wpusa.org/vta_victims_support_fund.

As nurses dedicated to healing and alleviating suffering, NNU says the focus on gun violence must begin with prevention and stopping gun violence before it occurs. In addition to the loss of life and physical injuries that can last a lifetime, the consequences can erode the mental and physical health of affected family members for years.

“But the inescapable cause of gun violence is firearms,” said Ross. Including the San Jose slaughter, there have been at least 232 mass shootings in the United States this year alone, after more than 600 last year, according to the Gun Violence Archive.

“It is long past time to move beyond thoughts and prayers and dismissals that it is too soon to talk about reforms following the latest shootings. As a nation, we need to protect all our families, and all of our people from what is clearly a preventable form of violence,” Ross said.