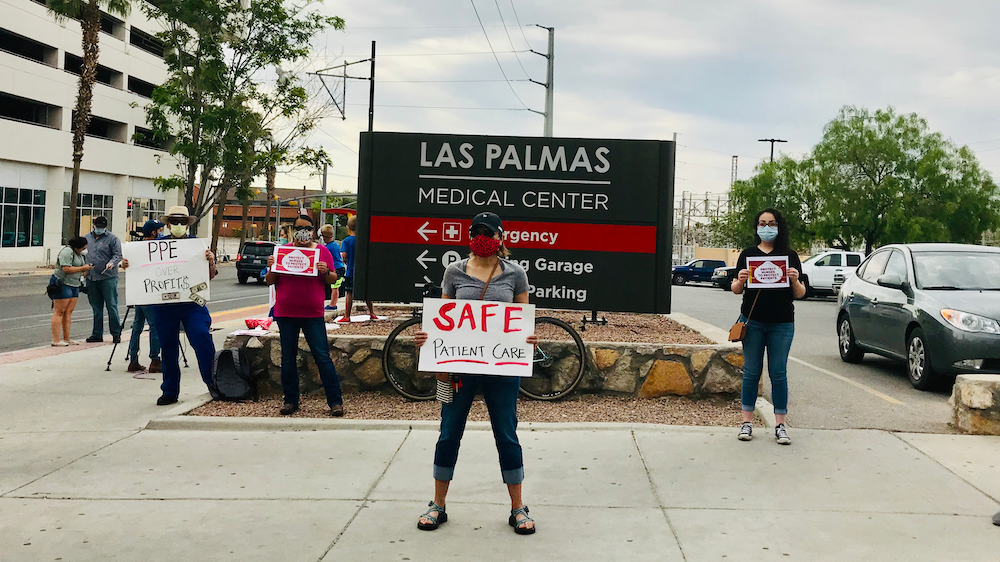 Las Palmas Medical Center registered nurses, joined by nurses from across El Paso, will rally Friday to protest retaliation against an RN who has been spoken publicly about inadequate COVID-19 safety measures, and was suspended this week after objecting to an unsafe assignment at the HCA hospital.

In a May Day shift change protest last Friday, Ashley Bartholomew, an Operating Room RN at Las Palmas told media of nurses’ concerns about safety conditions at the hospital, including the decision to reopen elective procedures at a time the coronavirus pandemic continues to rage.

Las Palmas said all patients would be tested prior to undergoing elective surgeries. But on Monday, two days after the May Day protest, hospital officials insisted the procedures go ahead even though the test results were either lost or not available – and even though the prior week the hospital reportedly had positive patients in the pre-op holding area.

Additionally, Las Palmas officials have been requiring nurses to unsafely re-use masks for entire shifts, despite contact with multiple patients increasing the risk of exposure and spreading the virus to others.

Bartholomew, who only had the mask issued to her for a full prior shift, asked her manager for an alternative assignment for safety reasons but was refused, sent home, and suspended for three days. Other nurses who witnessed the exchange have submitted statements supporting her. The hospital also sent a Nurse Anesthetist home the same day for asking questions about the test results.

National Nurses United, which represents Las Palmas RNs, has been pressing hospitals for months to implement the highest level of protection, including powered air-purifying respirators, and single-use of N95s and just today protested outside the White House noting that at least 87 RNs across the U.S. have died of COVID-19.

“We stand with our sister nurse advocate in exercising her rights and commitment to safe patient care,” Castillo said. “It is particularly noticeable that they are marking National Nurses Week by retaliating against a nurse who speaks out about safety standards.”