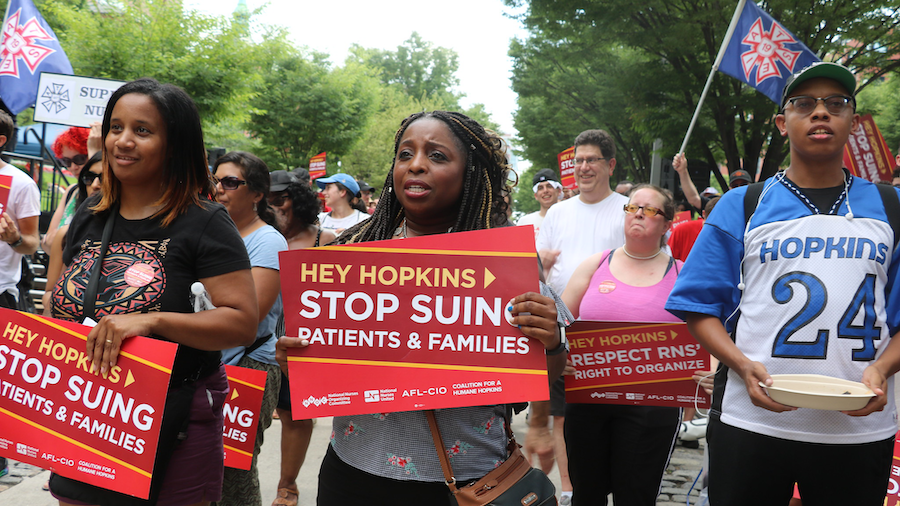 Coalition for a Humane Hopkins, in addition to Johns Hopkins University students and Baltimore community advocates, on Tuesday, Sept. 15 will hold a caravan and speak out to urge Johns Hopkins Hospital to formally commit to ending its controversial practice of suing patients over medical debt.

National Nurses United (NNU) in 2019 released a report that concluded that since 2009, Johns Hopkins filed more than 2,400 lawsuits in Maryland courts seeking the repayment of $4.8 million in alleged medical debt from former patients. In more than 400 cases, the hospital has won garnishments of wages or bank accounts.

Since NNU exposed its practices last year, lawsuits by Hopkins have dropped dramatically, and the institution has only filed one lawsuit in 2020. But Hopkins similarly temporarily slowed the filing lawsuits after the Baltimore Sun questioned this practice in 2008, then resumed this behavior after a cooling-off period. Coalition for a Humane Hopkins is seeking a public commitment and policy change by Hopkins against this practice.

What: Caravan and Speak Out Against Hopkins Medical Debt Lawsuits
When: Caravan starts Tuesday, Sept. 15, 2020 @ 1 p.m.; Speak out starts at 1:30 p.m.
Where: Caravan starts at corner of 29th Street and Remington Avenue; Speak out held at Harriet Tubman Grove (In Wyman Park Dell Across from Baltimore Museum of Art)

Hopkins’ medical debt practices also have a disproportionate impact on African American Baltimore residents. The area which contains the largest number of residents sued by Hopkins, for example, is 90 percent African American and has a poverty rate nearly triple the state average.

“I became a nurse because I want to heal people, and that means all people, regardless of their economic situation,” said Josh Pickett, an RN working in the psychiatric unit at Hopkins. “The nurses at Hopkins came out against the practice of suing patients last year, and I’m glad to hear that our collective actions made them reduce their medical debt lawsuits. But as a nurse, I need a commitment from Hopkins that none of my patients will ever be sued again.”

“Ending medical debt lawsuits becomes even more urgent as the country struggles with the health emergency and financial crisis precipitated by COVID-19,” reads the letter. “As one of the hospitals at the forefront of the fight against COVID-19, Johns Hopkins Hospital should re-examine its role in creating barriers to health care that endanger our entire community.”

“We’ve been with the Coalition for a Humane Hopkins since the beginning, because holding Johns Hopkins accountable to how it treats this community is essential if we are ever going to reach true racial and economic justice in Baltimore,” said Terrel Askew, member of the Fair Development Roundtable. “Hopkins is a multi-billion dollar institution that could do so much good in the community. Instead, they exploit and target the poor people of this city for the sake of their own profit margins.”