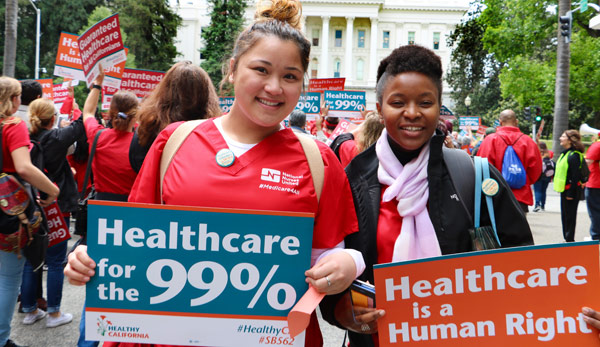 A Bill to Guarantee Health Care for All Californians

Registered nurses and other healthcare advocates are heralding the California Senate Health Committee's passage of SB 562, the Healthy California Act today, Wednesday, April 26, with a majority of the committee members’ support.

SB 562, the Healthy California Act, would establish an improved Medicare for all type system in California. Full details of the bill may be viewed here http://bit.ly/2ng5hUg

Prior to the hearing, over a thousand bill supporters, including members of the California Nurses Association/National Nurses United, held a spirited rally at the Sacramento Convention Center followed by a colorful march to the State Capitol for the Senate Health Committee hearing.

“The most important thing today was the breadth and depth of support by the dozens of people lining up to back the bill, representing 250 organizations across the state. These are organizers who are going to be with us to make the Healthy California Act the law of the land in California,” said RoseAnn DeMoro, Executive Director of the California Nurses Association, the primary organizational sponsor of SB 562.

“We want to insure that everyone has care, because this is who we are as a society,” said Senator Ricardo Lara, one of the bill’s co-authors at the rally prior to the hearing. “California has the courage to say it’s finally time to remove the insurance companies from the decision-making on how we get care in this country.  It is time to say once and for all, that healthcare is a right, not a privilege only for those who can afford it.”

“There has been a mobilization for this bill up and down the state and I’ve heard the stories people are sharing.  It’s unbelievable that we could live in the richest state, in the richest nation in the world and yet people don’t have access to healthcare. That is wrong,” said Senator Toni Atkins, co-author of SB 562, at the morning rally. “California will not go back. We are not standing still. We are going forward.”

In addition to bill authors Senators Lara and Atkins, the bill is sponsored by, Senators Benjamin Allen, Cathleen Galgiani, Mike McGuire, Nancy Skinner, and Scott Wiener as co-authors. CNA is the primary sponsor of the bill, joined by the Healthy California Campaign, which represents over six million Californians. For more information on the campaign: http://www.healthycaliforniaact.org/

Nurses say the Healthy California Act could become a national model for how all states can act to address the ongoing emergency of individuals and families threatened by high out of pocket costs, inadequate access to coverage, and restrictive insurance networks.