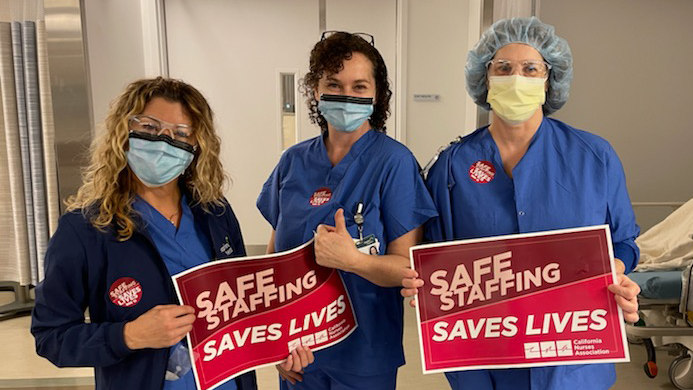 Today, more than 100,000 RN members of the California Nurses Association declared victory when the California Department of Public Health (CDPH) announced it will not approve for hospitals any new expedited waivers of the state’s landmark safe staffing ratios and all existing waivers end by Feb. 8 -- with some even sooner if the state determines so.

“This is an incredible victory for patients and nurses, because we know that safe staffing saves lives,” said Zenei Triunfo-Cortez, RN and a president of the California Nurses Association and its national organization, National Nurses United. “It was our collective action as a union that defeated the money and lobbying power of the hospital industry, which we know is focused on the bottom line, not safe patient care.”

Hospital employers have, since last summer, used the Covid pandemic as an excuse to begin applying with CDPH for waivers of California’s safe staffing standards, which specify for various hospital units the maximum number of patients that can be assigned to one nurse -- with adjustments made for severity of patient illness. For nurses, optimal staffing is paramount to ensuring the safety of and quality of care for patients, and Covid had already severely strained staffing since care is more complicated, patients are the sickest they’ve seen, and many staff are unable to work because they themselves had contracted Covid.

In December, the staffing crisis worsened when CDPH allowed hospitals to automatically obtain blanket “expedited waivers” of safe staffing ratios for critical departments such as the intensive care unit and emergency room, among others. Nurses repeatedly warned that the understaffing in their hospitals was unsafe and untenable.

Nurses have been protesting all waivers of safe staffing standards, arguing that patients need more, not less, care during Covid and that the state was actually rewarding hospitals for manufacturing staffing problems by canceling traveling nurse contracts, failing to fill open RN positions, still doing elective surgeries, laying off and furloughing nurses, and more.

Nurses have staged hundreds of direct actions inside and outside their hospitals in defense of safe staffing standards, including a mass mobilization most recently on Jan. 27; held statewide as well as hospital chain-wide press conferences for media; and sent almost 6,000 emails in protest to CDPH.

“This win reinforces what we have learned over the decades in defending safe staffing standards against multiple attacks: Fighting back together works,” said Triunfo-Cortez. “But we must continue to stay united and vigilant in protecting and enforcing the safe staffing standards we need to provide the kind of nursing care we know our patients deserve. Because we know this won’t be the last time the industry tries to get rid of ratios.”