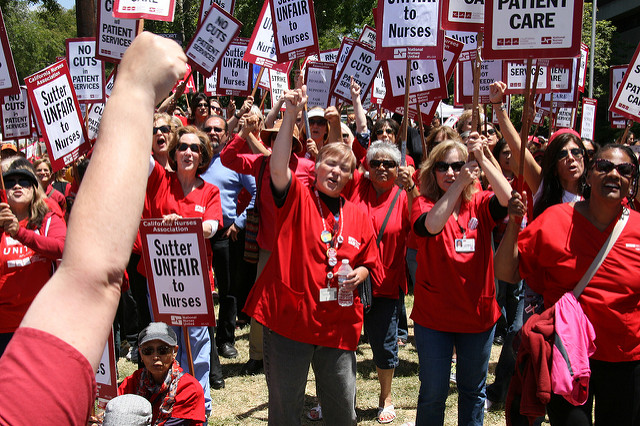 
It’s over – with a resounding triumph for thousands of registered nurses at five San Francisco Bay Area hospitals operated by the large Sutter Health system who have managed to defend patient care protections and nursing standards from an employer insistent on sweeping concessions in a long running dispute.

After nine strikes over two years, with multiple days added on by company lockouts, the RNs have won tentative agreements for new collective bargaining agreements premised on elimination of nearly 200 concession demands by Sutter that were the main issue in the confrontation.

The agreements affect 3,000 RNs and several hundred respiratory, X-ray and other technicians who work at Alta Bates Medical Center facilities in Berkeley and Oakland, Eden Medical Center in Castro Valley, Sutter Solano in Vallejo, and Sutter Delta in Antioch. The final settlement was reached Friday morning.

Further details will be presented to the RNs and techs in membership meetings at each facility that begin Wednesday, with the nurse bargaining teams recommending approval of the pacts. The RNs and techs, represented by the California Nurses Association/National Nurses United or its affiliate Caregivers and Hospital Employees Union.

“Words can not describe the amazing spirit, courage, and dedication of the Sutter nurses to their patients, their communities, and their colleagues in this long fight in which the central issue was defending patient care protections and nursing standards from a wealthy and powerful employer determined to roll them back,” said NNU Executive Director RoseAnn DeMoro.

“In an era in which corporate giants in healthcare and many other industries from coast to coast are forcing working people and their families to accept multiple reductions in workplace standards and livelihoods, the Sutter nurses have shown that through unity and a willingness to stand up and say ‘no,’, it is possible to hold the line and win,” DeMoro said.

“This achievement sends an emphatic message to nurses and other workers everywhere. Stand up for yourselves, stand up for the public interest and the public will always be with you,” DeMoro said.

The settlements were finally achieved when Sutter officials agreed to withdraw the concessions that prompted the conflict, including threats and discipline against nurses at Sutter Solano who exercised their legal rights to participate in one of the strikes. That follows a pattern established in earlier agreements at other Sutter Bay Area hospitals that also were premised on the withdrawal of concession demands.

“We have a contract but, most importantly, we fought a hard battle, won a good contract and taught the hospital industry that they can never break the nurses' spirit.” – Janet Braillard, Solano RN.

“We've been galvanized by this fight to always remember that corporate healthcare does not always put the patients, the community, and those on the front lines like nurses and techs first. We must be the watchdog for our collective health in so many ways.” – Eric Koch, Alta Bates Summit, Berkeley

“By standing together, the Delta nurses forced Sutter to come back to the table and bargain fairly.  We are happy to reach a tentative agreement after a long two years that will help protect our patients and profession.”  – Melissa Thompson, RN CCU Delta

“After two long hard fought years CHEU and CNA have finally reached an agreement on our contract.  Due to our diligence our membership, patients and community have prevailed.” – Chuck Maltzahn, CHEU president

"Through the united and determined efforts of the nurses, we were able to settle our hard fought battle with Sutter and obtain a fair and respectable contract." – Mike Hill, Alta Bates Summit, Oakland

“We prevented Sutter from rolling back nursing standards in Northern California. The nine strikes were important and necessary.” – Michele Ross, Eden