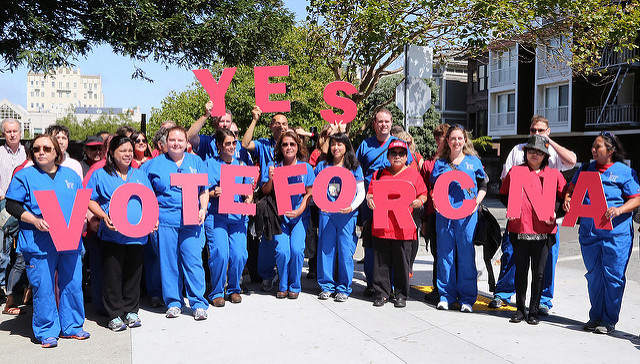 In a ruling issued late Thursday, the National Labor Relations Board San Francisco region resolved outstanding challenged ballots from the December secret ballot campaign, in which the RNs voted in mid-December by a count of 351 for CNA to 321 for Sutter.

Concurrently, Joseph Frankl, the NLRB regional director, dismissed Sutter CPMC’s objections to the election, writing that the employer “failed to identify potential witnesses or even to allude to

testimony,” in support of their objections. Formal certification by the NLRB of CNA/NNU as the elected representative of the RNs is expected later today.

“What a great Valentine gift for CPMC nurses and the San Francisco community,” said NNU co-president Zenei Cortez, RN. “With this powerful, united voice, CPMC nurses across San Francisco will have a much stronger voice to advocate for safe patient care and a healthier city. After a long fight and such opposition from their employer, it is rewarding to see justice served.”

“Congratulations to the courageous Sutter nurses for their heroic fight, from San Francisco and across the state, for patients and themselves,” said RoseAnn DeMoro, CNA and NNU executive director.

Noting CPMC’s bitter campaign to prevent San Francisco RNs from achieving a collective voice, attacks on Sutter RNs in the East Bay, and cuts in patient services throughout Northern California, DeMoro asked, “when will Sutter get it? It’s time to put safe care and respect for RNs as their first priority, not just piling up more and more profits.”

CPMC RNs, many of whom have worked for a number of years to join CNA, reacted with relief and joy to the decision.

"We are thrilled with the decision.  It is a correct and just decision.  We finally won and now we can bargain for a contract that will empower RNs at CPMC Pacific to advocate for our patients,” said CPMC RN Amit Shaham.

"It is long overdue,” said Aisha Magno, RN “that we the nurses at Pacific belong to CNA along with the rest of the RNs in Sutter to stop the bottom line policies and make sure the priorities are focused on quality patient care at CPMC."

Cortez called on CPMC and Sutter to “now respect the will of the nurses and the law by bargaining in good faith on a first contract” for the Pacific RNs.

CNA now represents 8,000 Sutter RNs at 14 California hospitals, including 1,600 RNs at three Sutter San Francisco CPMC campuses, among them 800 at the Pacific site. Overall CNA represents 85,000 RNs. NNU, of which CNA was a founding and the largest member represents 185,000 RNs nationwide.