Allina Hospitals Charge Patients at Nearly 3 Times the Cost, Among Highest in Minnesota 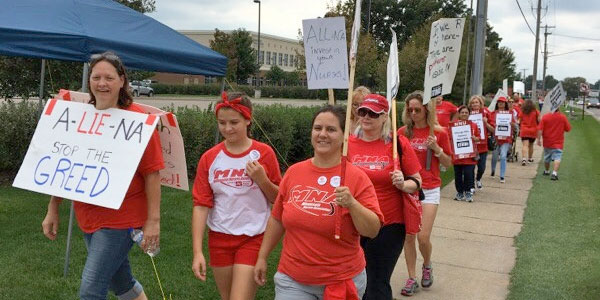 Allina Health sets charges for patient services at nearly three times its costs, with Allina hospitals ranking among the most expensive in the state of Minnesota, according to data released today by National Nurses United (NNU).

Three Allina hospitals are among the most expensive in the state. Mercy Hospital has a charge-to-cost ratio of 357 percent—meaning it sets its charges at $357 for every $100 of costs. Abbot Northwestern has a charge ratio of 351 percent, and United 350 percent.

The findings are based on publicly available Medicare Cost Reports for 2014-2015. NNU has been examining hospital charge data for more than a decade.

“What this data exposes is that patients, especially those not covered by private insurance, who are subject to the full brunt of inflated hospital charges, face economic calamity when they are at their most vulnerable and in need of hospital care,” said Jean Ross, RN, a co-president of NNU and a Minnesota nurse.

Allina also takes advantage of the national scandal of high prescription drug prices, setting its charges for drugs charged to patients at 301 percent over costs, again well above the Minnesota statewide hospital average of 241 percent.

In the past, hospitals have claimed that the actual charges don’t matter, and that few pay the list price. “But it’s a defense that defies logic,” said Ross. “The higher the starting point on a charge, the higher the ultimate reimbursement.”

NNU research has consistently shown a direct correlation between high charges, and profitability, a clear indication that the higher the charges, the greater the ultimate reimbursement.

Of 117 Minnesota hospitals surveyed by NNU, Mercy, Abbot Northwestern, and United each finished among the six hospitals with the highest net income in the state.

The effect on the uninsured or underinsured is often devastating.

To compound the problem, Allina has a track record of aggressive pursuit of payment from patients who are unable to afford the high cost of care at Allina hospitals.

According to its own annual financial disclosure statement and court filings, Allina, while benefitting from a tax-exempt non-profit status, owns a for-profit debt collection service set up to pursue legal action against patients unable to pay their medical bills.