The Opioid Crisis For Healthcare Workers 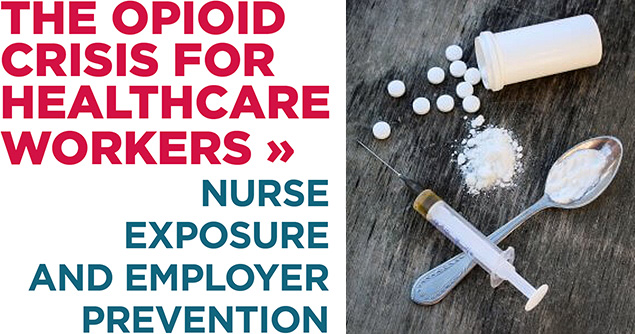 Opiates, including heroin, oxycodone, hydrocodone, codeine, morphine, and synthetic opioids, including fentanyl and carfentanil, have been implicated in the epidemic of opioid-related overdose deaths in the United States over the past few years. Between 2000 and 2015, more than half-a-million people died from a drug overdose in the United States. In 2016, about 145 people per day died from an opioid overdose.

Nurses can be exposed to opioids, including fentanyl and carfentanil, through contact with the patient, their environment, clothing, or linens. It is often unknown which opioid the patient was using and contamination may not be visible. Three nurses at an NNU facility were exposed to an opioid, that authorities believe was fentanyl or carfentanil, while providing patient care and cleaning a patient’s room. The exposure resulted in all three needing reversal with naloxone/narcan.

Employers must provide a safe workplace to all employees. Employers should create opioid exposure control plans with the input of direct-care registered nurses. This document details the elements that an employer’s exposure control plan should contain, including screening, isolation, and decontamination protocols, personal protective equipment, post-exposure follow up protocols, and training.

Opioids are a class of drugs that includes heroin, oxycodone, hydrocodone, codeine, morphine, and others. Fentanyl (fentanil, Duragesic®) and carfentanil (carfentanyl, Wildnil) and their analogues are potent opioids manufactured both legally and illegally. All of these have been implicated in the epidemic of opioid-related overdose deaths in the US over the past few years.i

Between 2000 and 2015 more than half a million people died from a drug overdose in the U.S. The number of overdose deaths involving opioids has quadrupled since 1999 while Americans report no overall change in pain.ii More than 53,000 people in the U.S. died from an opioid overdose in 2016—that is 145 people per day.iii Nearly half of these opioid overdose deaths involved prescription opioids, though recent data indicates that illicitly manufactured opioids are increasingly implicated.iv, v Synthetic opioid deaths, primarily related to illicitly manufactured fentanyl, increased 264% from 2012 to 2015.vi There are approximately thirty nonfatal opioid overdoses for every fatal overdose.vii

This rapid increase in opioid overdoses has led to increased healthcare use. Opioid-related emergency department visits in the U.S. increased by 99.4 percent between 2005 and 2014. The rate of inpatient adult hospital stays related to opioids increased 64.1 percent between 2005 and 2014.viii One retrospective cohort study of hospital discharge data in 44 states found a 34 percent increase in opioid overdose admissions to intensive care units between 2009 and 2015.ix

Some states and regions report higher rates of opioid-related deaths and law enforcement drug encounters than others. The Northeast and Midwest regions had the largest increases in total deaths involving heroin between 2010 and 2015 and the largest increases in total deaths involving synthetic opioids between 2013 and 2015.x Similarly, the largest increases in fentanyl drug reports by law enforcement from 2013 to 2015 were seen in the Northeast and Midwest regions.xi The rate of inpatient stays related to opioids varied by a factor of 5.6 across states in 2014. Of the 44 states and the District of Columbia included in the study, the highest opioid-related inpatient rates were in Maryland (403.8 stays per 10,000 population), Massachusetts (393.7 stays), and the District of Columbia (388.8 stays) and the lowest rates were in Iowa (72.7 stays per 10,000 population), Nebraska (78.6 stays), and Wyoming (96.7 stays).xii

There are no federal or consensus occupational exposure limits for fentanyl, carfentanil, or analogues. The National Institute for Occupational Safety and Health (NIOSH) has published guidelines for protecting emergency responder personnel who may be occupationally exposed to fentanyl, including during pre-hospital patient care, law enforcement, investigation and evidence handling, and special operations and decontamination. xiv Until recently, there was little recognition of the potential for harmful exposure to nurses and other healthcare workers when providing care to patients who had overdosed. In April 2018, NIOSH published guidelines for protecting nurses and other healthcare workers from potential exposure to fentanyl and its analogues.xv The NIOSH guidelines are missing key elements that are needed to be fully protective: the guidelines do not place clear responsibility on the employer to create and implement policies, work practice controls, personal protective equipment (PPE), and other elements; the guidelines do not incorporate the precautionary principle (see below) and therefore are not effective or implementable in many exposure scenarios; and the guidelines do not consider the risks posed by carfentanil, which is toxic in extremely small amounts, and therefore do not offer protection in situations where carfentanil may be present. While these guidelines fall short of the protections that nurses need, the agency’s recognition of potential hazardous exposure for nurses and other healthcare workers is significant.

The precautionary principle holds that “action to reduce risk should not await scientific certainty.”xvi Recent events underline the ways that following the precautionary principle when making policy decisions would have led to better outcomes—Ebola epidemic and exposure and infection of nurses at Texas Presbyterian and repeated SARS outbreaks in Toronto. Regarding the opioid epidemic, there is limited scientific evidence specifying the exposure pathways and risks for nurses and other healthcare workers who provide care to patients recovering from an overdose. Very little is known about dosage, rate of metabolism, rate of elimination, and other pharmacokinetic properties of the drugs. But there is evidence that exposure to minute amounts of the most powerful opioids, fentanyl and carfentanil, can cause life-threatening symptoms and death. And so protections should be implemented in all situations where individuals may encounter even trace amounts of fentanyl/carfentanil. Application of the precautionary principle requires that healthcare employers should provide the highest level of protection to their employees until there is substantial evidence indicating different measures are appropriate.

Under the Occupational Safety and Health Act of 1971, each employer is required to provide “to each of his employees employment and a place of employment which are free from recognized hazards that are causing or are likely to cause death or serious physical harm to his employees.”xvii Employers must address the life-threatening hazard posed by opioid exposure, especially fentanyl and carfentanil, to nurses and other healthcare workers who provide care to opioid-overdose patients.

Chemical Characteristics of Fentanyl and Carfentanil

Fentanyl is manufactured commercially for pain control and anesthesia. Carfentanil is manufactured commercially only as a veterinary anesthetic for large animals. As a result, information on fentanyl is limited to specific therapeutic situations and very little is known about carfentanil in humans. Fentanyl and carfentanil are both manufactured legally and illegally but have not been studied extensively in off-label applications. The recommendations in this document therefore are based on the precautionary principle, utilizing the best available evidence. Fentanyl typically exists as a crystal or crystalline powder at room temperature, but may be dissolved into liquid solutions.xviii Precise dosage information is unavailable. Carfentanil is estimated to be 10,000 times as potent as morphine, 100 times as potent as fentanyl. Carfentanil activity in humans is estimated to start at about 1 microgram.xix This picture showing the lethal amounts of different opioids vividly illustrates their relative dangers, but each of them can be deadly (Figure 1).xx

Routes of Exposure to Opioids

Symptoms of Exposure to Opioids

Nurses May be Exposed to Opioids When Providing Patient Care

Nurses and other healthcare workers who provide care to opioid-overdose patients face exposure risk to the hazardous opioid drugs through patient bodily fluids and contamination of patient clothing and belongings. Exposure to fentanyl and carfentanil is of significant concern given the small amounts of exposure that can cause severe reactions and death.

Nursing personnel may encounter drug particles and residues on the patient’s body, clothing, and belongings. It may be very difficult to determine if a patient’s clothing and belongings are contaminated, especially while providing life-saving care. It is likely unknown which opioid or combination of substances the patient was using. Overdose patients may be discovered with drug paraphernalia in, on, and around their bodies.xxiv Given the potential for life-threatening reactions in response to extremely small exposures, it is most protective to assume the clothing and belongings of patients presenting with opioid overdose symptoms are contaminated with the drugs.

The presence of fentanyl and carfentanil in patients’ bodily fluids, including urine, presents an exposure risk for nursing personnel providing care. Fentanyl stays in the patient’s body and bodily fluids for a period of time. For IV fentanyl administration, one study reported that it took 72 hours for 75% of the original dose to be excreted in urine. Other factors may delay the body’s metabolism and/or elimination of the drug,such as liver and kidney damage,both of which are common in habitual drug users.xxv, xxvi Fentanylis metabolized primarily in the liver into metabolites with no opioid-receptor function. These metabolites are excreted in urine, with estimated 10% unchanged drug. The available data indicate that fentanyl is likely present inpatients’ urine and other bodily fluids for a period of at least a few days after overdose.xxvii This information is unknown for carfentanil in humans.