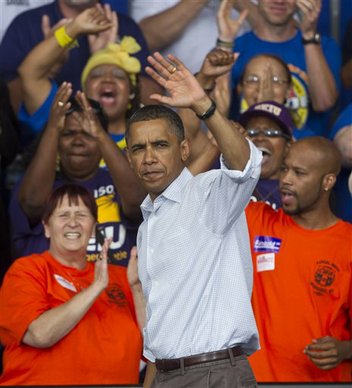 FILE - In this Sept. 6, 2010, file photo President Barack Obama waves after speaking at the annual Milwaukee Area Labor Council Laborfest in Milwaukee, Wis. The Obama administration is treading carefully on the contentious political issue that has led to a national debate over the power that public sector unions wield in negotiating wages and benefits. And White House officials have stayed away from any trips to Madison, the state capital, or other states in the throes of union battles, despite urging by union leaders. (AP Photo/Morry Gash, File ) 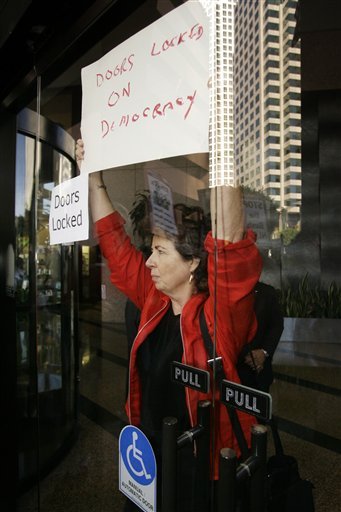 FILE - In this Oct. 5, 2006, file photo Rose Ann DeMoro, president of the California Nurses Association, protests in downtown Los Angeles against a ruling by the National Labor Relations Board which would bar nurse supervisors from belonging to a union. In the debate over collective bargaining in Wisconsin White House officials are staying away and DeMoro has been reminding President Barack Obama about his 2007 campaign promise to walk with union members."I think we're feeling a sense of betrayal from him and not liking it much," she said. (AP Photo/Damian Dovarganes) 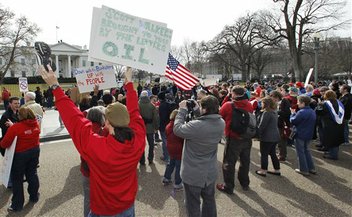 In this photo taken Feb. 26, 2011, Adam Sivitz, left, of Pittsburgh, joins protestors outside the White House in Washington in support of Wisconsin workers fighting a measure that would largely eliminate the collective bargaining rights of government workers. Despite union pleas to the White House to rally protesters, White House officials staying away from Wisconsin. (AP Photo/Manuel Balce Ceneta) 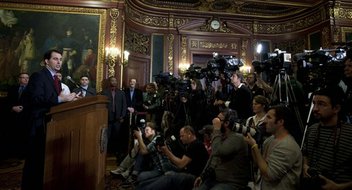 FILE - In this March 11, 2011, file photo Wisconsin Gov. Scott Walker speaks about the budget bill at a signing ceremony in Madison, Wis. The bill he signed bill strips most collective bargaining rights from the state's public workers, except police and firefighters. The measure passed the state legislature following more than three weeks of protests that drew tens of thousands of people to the state Capitol in opposition. (AP Photo/Morry Gash, File)

WASHINGTON — Union leaders urged Vice President Joe Biden during a White House meeting last month to go to Wisconsin and rally the faithful in their fight against Gov. Scott Walker's move to curtail collective bargaining rights for most public employees.

Request rebuffed, they asked for Labor Secretary Hilda Solis. So far, however, the White House has stayed away from any trips to Madison, the state capital, or other states in the throes of union battles. The Obama administration is treading carefully on the contentious political issue that has led to a national debate over the power that public sector unions wield in negotiating wages and benefits.

A few labor leaders have complained openly that President Barack Obama is ignoring a campaign pledge he made to stand with unions; most others say his public comments have been powerful enough.

The stakes are high as Obama looks toward a grueling re-election campaign. Republicans have begun airing television ads linking Obama to "union bosses" standing in the way of budget cuts in Wisconsin, Ohio and other states.
As a candidate, Obama seemed to promise more to organized labor, among the Democratic Party's most loyal constituencies.

"If American workers are being denied their right to organize and collectively bargain when I'm in the White House, I'll put on a comfortable pair of shoes myself," Obama said at a speech in 2007. "I'll walk on that picket line with you as president of the United States of America because workers deserve to know that somebody is standing in their corner."

Rose Ann DeMoro, executive director of National Nurses United, the nation's largest nurses union, called Obama "largely a bystander" in the debate over collective bargaining. "I think we're feeling a sense of betrayal from him and not liking it much," she said.

Doug Schoen, a Democratic political strategist, said Obama's strategy seems to be "keep your distance, avoid direct engagement, say most of the right things most of the time, and hope for resolution through sources other than your own."

Walker on Friday signed a bill that strips most collective bargaining rights from the state's public workers, except police and firefighters. The measure passed the Legislature following more than three weeks of protests that drew tens of thousands of people to the state Capitol in opposition. The governor had announced his plan on Feb. 11, saying his state was broke and there was no point negotiating with the unions when there was nothing to offer.

The request for Biden to travel to Wisconsin came from Gerald McEntee, president of the American Federation of State, County and Municipal Employees, according to two union officials familiar with the Feb. 24 meeting. The officials requested anonymity because the meeting was private.

Five days later, during the AFL-CIO winter meeting, McEntee told Obama senior adviser David Plouffe that unions wanted more than words, the officials said. McEntee told Plouffe they wanted a high-profile emissary to stand with protesters to show that the president was by their side.

A spokesman for McEntee declined to comment, as did a White House spokeswoman.

Obama has called Walker's proposal an "assault on unions" and urged governors not to vilify public workers. After the state Senate relied on a procedural move Thursday to pass the anti-bargaining rights measure without any

Democrats in the chamber, White House spokesman Jay Carney said Obama believes it is wrong for Wisconsin to use its budget troubles "to denigrate or vilify public sector employees."

Solis also pledged her support for public employees on a phone call with thousands of members of the Communications Workers of America.

"Budget sacrifices are one thing but, demanding that workers give up their voice is another," Solis told the union members.

But asked whether Solis would go to Wisconsin or any other state where protesters are rallying, spokesman Carl Fillichio said she's "keeping an eye on the situation."

DeMoro, from the nurses' union, has been reminding Obama about his 2007 campaign promise to walk with union members. She has even sent out press releases offering to buy the president a pair of shoes to march with demonstrators.

"Standing with the embattled workers would be an important symbol," DeMoro said.

There's no question that Obama will keep getting strong re-election support from organized labor. But he stands the risk that unions won't be as enthusiastic if he is too aloof about the attack on bargaining rights. On the other hand, it's possible that unions will be so consumed with their own efforts to save bargaining rights, recall governors or other issues of self-preservation that they won't have the time to work on Obama's behalf with full vigor.

Schoen, the Democratic consultant, said Obama is "trying to have it both ways."

If the budget-cutting tactics of Walker and GOP Gov. John Kasich of Ohio are successful, Obama doesn't want to be seen as aggressively taking sides, Schoen said. If they fail, the president can say he was always on the side of the unions.

Most union leaders have praised Obama in public for offering support with his words. Some believe it may be better for him to stay out so Republicans can't claim the protests are being organized in a grand political move.

"Obama needed to hang back and let people fully understand this is being run by the people of Wisconsin, not by the Democratic Party leadership," said Greg Junemann, president of the International Federal of Professional and Technical Engineers.

Both parties already are using Wisconsin to try to boost their political fortunes.

Crossroads GPS, a group organized by former Bush advisers Karl Rove and Ed Gillespie, announced this past week that it would spend $750,000 on national cable television ads supporting Walker and the Wisconsin Republicans.

The Democratic Congressional Campaign Committee on Thursday set a goal of raising $100,000 in 24 hours from angry voters opposing the Wisconsin legislation.
---
Associated Press writer Jim Kuhnhenn contributed to this report.