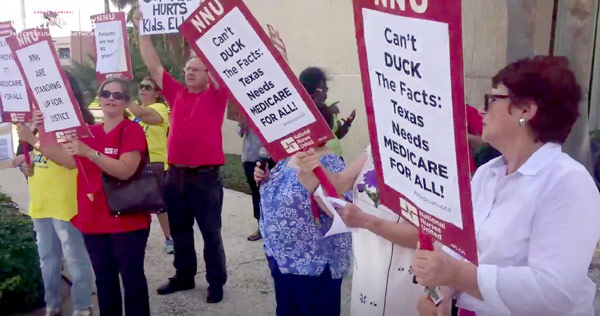 Cynthia Martinez has been a registered nurse for 12 years. She works with pregnant women and their newborn babies.

Many of them, she said, live below the poverty line, and have to choose between paying for medicine and keeping the lights on in their homes.

Martinez was among the dozen or so nurses and teachers who braved sweltering heat Sunday and demonstrated outside U.S. Rep. Blake Farenthold's Corpus Christi office.

Drivers on Shoreline Drive honked as protesters waved signs, trying to get the public on their side in the debate over the Affordable Care Act.

They also called for the ouster of Farenthold, who is among Republicans opposing the law.

"The fact we're jeopardizing the lives of millions of Americans, no one should be okay with that," Martinez said. "You have families who either pay for their child's chemotherapy ... or their home is foreclosed on.

"He's our representative. He's supposed to be representing us. We want him to push ... for health care for all because it's best for the community.

Farenthold, who has represented Texas' 27th district since 2011, released a statement saying:

"Repealing and replacing Obamacare is one of my top priorities. It's no secret Obamacare is hurting the American people, especially those it was intended to help. That's why I will continue to support repealing and replacing Obamacare. I would be happy to meet with them, but unfortunately have a previously scheduled commitment in Moulton today. I look forward to hearing what they have to say."

Organizers held a "mock duel" outside the office, a reference a controversy last week during which Farenthold, on the 1440 Keys radio show, singled out "some female senators from the Northeast" as part of the reason the Senate had not done away with and replaced the Affordable Care Act.

He went on to say that if "it was a guy from South Texas, I might ask him to step outside and settle this Aaron Burr-style."

Later, U.S. Sen. Susan Collins, of Maine, was caught on a hot mic in a conversation with Rhode Island Sen. Jack Reed, calling the Corpus Christi representative "so unattractive." She also referred to a widely circulated picture of Farenthold in ducky pajamas.

"Our representative in Washington is not holding true to those things that we need in order to be able to afford health care," said Nancy Vera, president of the Corpus Christi American Federation of Teachers.

Texas
Medicare For All