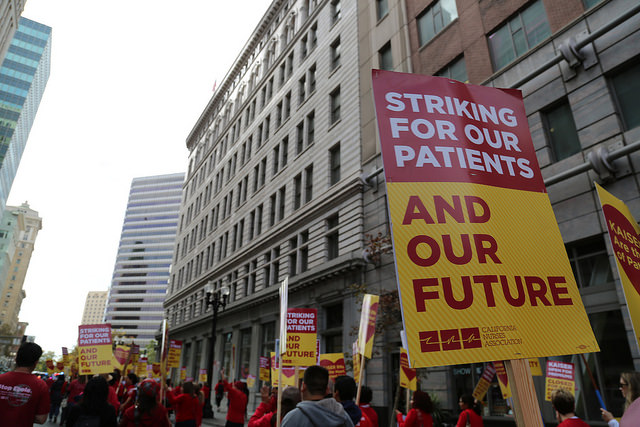 Nurses gathered outside the VA Hospital in Durham Wednesday to raise awareness about the risk Ebola poses to healthcare workers. It was part of an international effort, urging hospitals to adopt the highest preparedness standards for staff who might potentially treat a patient with Ebola.

National Nurses United organized the effort. The group says many hospitals lack full hazmat suits with sufficiently-powered air-purifying respirators to properly protect nurses from exposure. The group also argues for more extensive training to teach workers how to properly put on and take off the gear.

'Nurses should not have to die because they take care of a patient with Ebola because the facility is too cheap to do the protective equipment that they need.'

Irma Westmoreland is a registered nurse in Georgia, and the chairwoman of Veterans Affairs for National Nurses United.

"All nurses need to be protected," says Westmoreland. "Nurses should not have to die because they take care of a patient with Ebola because the facility is too cheap to do the protective equipment that they need."

Westmoreland points to Ebola survivor Amber Vinson as an example of the risk. Vinson is a Dallas nurse who contracted Ebola after treating the late Thomas Eric Duncan.

Vinson says she didn't receive enough training about handing her protective gear prior to using it.