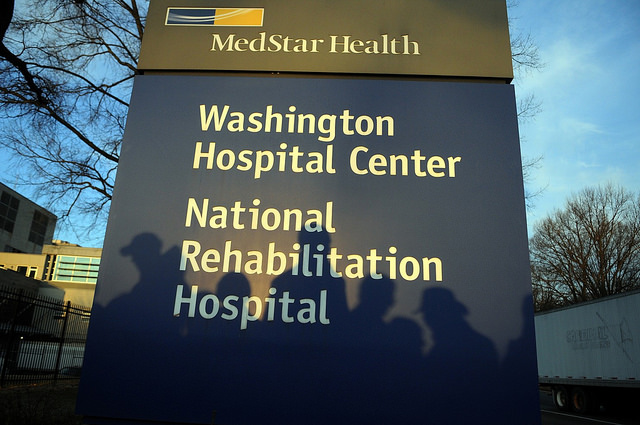 Staff at the region’s largest private hospital — MedStar Washington Hospital Center — have given it consistently low marks in key areas of patient safety over the past four years, according to results released Friday.

Although doctors’, nurses’ and administrators’ perception of patient safety has improved during that time — in some cases significantly — the hospital scores below the national average in seven out of 12 patient safety measures in key areas, including the overall perception of safety at the hospital and the ability of staff to report mistakes without fear of punishment.

Hospitals across the country are under increasing pressure to reduce medical errors, but survey results show that improvement has been slow across the board. Washington Hospital Center participated in three surveys conducted by the federal Agency for Healthcare Research, in 2010, 2012 and February 2014.

The surveys, which are voluntary, provide a snapshot of hospital employees’ perception of patient safety. About 650 of the country’s roughly 5,000 hospitals took part this year.

On Friday, Washington Hospital Center officials released results from 2012 and 2014 after the National Labor Relations Board ruled in favor of the nurses union, which has been seeking the 2012 survey data. It was the first time the hospital released any of the survey results.

About 3,500 of the hospital’s roughly 6,000 employees participated in this year’s survey; nurses accounted for about 50 to 60 percent of responses, and physicians 7 percent, hospital officials said.

In a letter sent to all employees, John Sullivan, the hospital’s president, said the hospital was posting survey results from 2012 and 2014 on its internal communication system. He said he was encouraged that overall hospital results showed improvement and that staff participation increased 24 percent over the two years.

“This is a big step,” he wrote. “Research shows that organizations that regularly share this kind of information with associates make greater gains and improve safety — and that is certainly our goal.”

He noted that more than half of respondents said the hospital needs to do better in two critical areas — teamwork across units, and reporting errors without fear of punishment.

“It’s unfortunate we had to go through all this litigation to get that data,” he said Friday. “We look forward to collaborating with management to improve safety.”

The survey is one tool that hospital officials say they use to measure the safety of hospital care. In another key area, the hospital has made dramatic improvements in lowering its rate of central-line infections, according to Arthur St. André, the hospital’s director of quality and safety. Officials are also encouraged that clinicians are self-reporting more incidents, including near-misses, using a new electronic system installed more than a year ago that allows individuals to report anonymously, he said.

Among the patient safety results:

St. André said the hospital tries to distinguish between how it analyzes a safety lapse and those situations where discipline is required. “We do have associates telling us that we need to hold everybody accountable,” he said.

â— In 2014, 42 percent gave a positive response concerning how well patient care is handed off to colleagues, a big improvement over the 31 percent positive response in 2010 and slightly below the 2014 national average of 44 percent.

â— In 2014, less than half of respondents — 47 percent — gave a positive response when asked about staffing, compared with the national average of 51 percent.

The measure on which hospitals typically score the highest is on teamwork within units. Across the country the average was 75 percent positive; Washington Hospital Center did slightly better, with 77 percent positive response.