Coloradans Will Put Single-Payer Health Care To A Vote

On a brisk morning in Denver recently, an ambulance pulled up in front of a downtown office tower. "I think the patient is going to make it," Dr. Irene Aguilar said as a team rolled out the gurney.

This wasn't a medical emergency, but rather a bit of political theater. The gurney held several big boxes of signed petitions to be delivered to Colorado's Secretary of State's office. The group ColoradoCareYES gathered enough signatures — more than 100,000 — to put a single-payer health system on the ballot next fall.

Under the plan, Coloradans would still pick their own providers of health care, but the new system would pick up all the bills. There would be no deductibles and fewer and smaller copays.

"Our current system gouges us financially," says Ken Connell, a volunteer with ColoradoCareYES. "Too many don't have access until they're too far along the sick path."

Connell says he's been advocating for changes to the U.S. system of health care insurance for more than a decade — ever since his 33-year-old son took his own life. Connell says better access to mental health care could have made a difference for his son.

"We could not get him care," Connell says. "It's a human right. We should be taking care of each other, as long as we can, and we certainly have the resources in this country."

Aguilar, the doctor who accompanied the box-filled gurney, is also a Colorado state senator and a Democrat. She led the rally at Denver's Civic Center the day the signatures were delivered.

"This is not going to be an easy fight," Aguilar says. Obamacare has been a good start, she says. It has sliced Colorado's uninsured rate in half. But many people are still uninsured, and others struggle to pay their premiums and out-of-pocket costs.

The idea behind ColoradoCare, Aguilar says, is "to have everybody paying in but everybody having access to health care that will keep them healthy, keep them working, keep them contributing to our society." 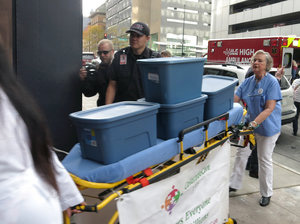 Here are some key features of the proposal: Seniors would stay in the Medicare system, and those in Tricare, the military health system, could keep that insurance. And anybody would be free to buy private coverage from a private insurer, though they would still have to pay for ColoradoCare. It would work like a single-payer plan, in the sense that everybody pays in, and everybody would be automatically covered, one way or another.

To finance the project, Colorado employers would pay nearly 7 percent in a payroll tax. Employees would pay 3 percent or more of their gross pay toward the health plan. The self-employed would need to pony up 10 percent of their annual net income (to cover the employee's contribution plus the employer's contribution — analogous to the formula used to calculate federal self-employment tax). All in all, supporters say, these proposed tax hikes would raise around $25 billion, and save residents money in the long run.

But the tax hike could be a concern for many voters according to Michele Lueck, president and CEO of the Colorado Health Institute, a nonprofit, nonpartisan think tank. "The price tag is just enormous, right?" she says. At $25 billion, "it rivals the state budget."

For years, Coloradans have shot down tax increases. "I don't think that there have been many, if any, times when Colorado has bit off something that big," Lueck says.

Other than taxes on marijuana or tobacco, Colorado voters haven't passed a statewide tax hike for more than two decades.

Some people worry the price tag of such a program would make Colorado less attractive to businesses and millennials.

"If you think it's expensive now, it's going to get even more expensive," says Jonathan Lockwood, executive director of Advancing Colorado, a free-market advocacy group. "Really, I think the biggest part of this is that it's an unrestrained tax hike."

"The finances don't work," she says, citing the case of Vermont, whose legislature passed a universal healthcare bill a few years ago. The Vermont governor soon thereafter pulled the plug on the plan he'd previously championed, after ballooning cost estimates forced him to admit the state couldn't afford the program.

Other than taxes on marijuana or tobacco, Colorado voters haven't passed a statewide tax hike for more than two decades.

Gorman says she worries the Colorado proposal would vest too much power in a 21-member governing board; it would have taxing authority, she says, but no controls to ensure transparency.

"These people have way too much unaccountable power in this initiative," she says.

The proposed system would also put 4,000 brokers out of work and lead to longer waits for care, according to Tammy Niederman, representative of a trade group for health insurance brokers.

"This will inevitably ration care, Niederman says. "There's no way to put in a universal system that doesn't do that."

Colorado's insurers and its hospital association haven't yet taken a position on the measure. Democratic Gov. John Hickenlooper is also reserving judgment.

Meanwhile, all agree that the total numbers in political advertising dollars spent for and against the measure are sure to be big leading up to December, 2016.

The single-payer advocacy group ColoradoCareYes raised nearly $330,000 in contributions in 2015, according to filings made with the Colorado Secretary of State's office. That put the organization's donations in the top 10 among groups advocating for Colorado issues this year.

It's not clear how much money Advancing Colorado, a group opposing the single-payer ballot measure, has raised so far. But it has launched a digital campaign already that says, "ColoradoCare is a killer." And other forces opposed to the single-payer ballot initiative have started to mobilize. A group called "Committee to Stop Colorado Care," based in Parker, Colo., registered with the state in November.