Supreme Court Blog: We want healing, not a cover up. 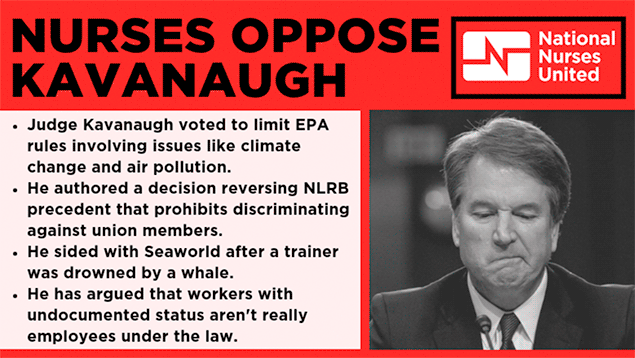 As registered nurses, who believe in treating and healing wounds, not covering them up, we condemn the rushed and frantic process to approve Judge Brett Kavanaugh’s nomination to the U.S. Supreme Court.

Nurses see the health impacts of untreated trauma in our patients, and as a predominately female profession, many of us have our own individual stories of assault. We watched last week as Dr. Christine Blasey Ford testified, painfully detailing her own trauma and the lasting effects she has suffered in her life. We believe Dr. Ford.

Union nurses will always stand up together for our patients, whether that means standing at the bedside or in the offices of our elected officials. So we are very aware that at the highest levels of power, corporate influence often holds sway over public health and safety. We believe this rush to push through Kavanaugh is a rush to confirm a justice who will advance a corporate agenda, at working people’s expense — for the rest of his lifetime.

Based on his prior court decisions, Kavanaugh has proven himself to be an adversary of equality and the rights of all working people. He has voted to limit Environmental Protection Agency rules involving issues, such as climate change and air pollution, and he has authored a decision reversing a National Labor Relations Board precedent that prohibits discriminating against union workers.

If placed on the Supreme Court, he will continue these kind of assaults through his decisions for many years to come.

We opposed the confirmation of Judge Kavanaugh prior to last week’s hearing and are now more convinced than ever that he is an unsuitable candidate for the Supreme Court.

His judicial record, along with the allegations of sexual assault, and his response to those allegations, reflects a deep lack of respect and empathy for human beings, particularly those who are vulnerable to harm and exploitation by powerful people and institutions.

The stakes in this nomination process are very high.

The Supreme Court has, and will continue to have, a tremendous impact on our lives, the lives of our loved ones and our communities. Supreme Court rulings affect our right to vote, our right to love and care for our families, to receive health care and to ensure that our children have clean water to drink and clean air to breathe. They can strengthen or weaken the likelihood we will be treated with fairness, and without discrimination in our neighborhoods, our workplaces and by the judicial system itself.

We applaud Dr. Ford’s willingness to come forward and testify about her painful experience and our hearts go out to the millions of survivors who are enduring renewed trauma, anxiety and fear due to this harrowing process.

When Senator Mitch McConnell dismisses the outpouring of opposition to the nominee as “endless delay and obstruction,” he reveals how willfully disconnected the GOP leadership is from the reality of survivor’s lives. They are railroading the Kavanaugh nomination through the Senate because time and time again, as a judge, Kavanaugh has sided with powerful corporate interests, and against the interests of working people, women, people of color, immigrants, and the most vulnerable among us.

Thanks to the internet, many of us saw the riveting moments in which sexual assault survivor, Ana Maria Archila, confronted Senator Jeff Flake in a Senate elevator after he announced his support for Kavanaugh.

She challenged Kavanaugh’s ability “to hold the pain of this country and repair it,“ noting, “that is the work of justice. The way that justice works is that you recognize hurt, you take responsibility for it, and then you begin to repair it.”

Archila’s words resonate for nurses because we dedicate ourselves to recognizing hurt and working to heal it.

We applaud the thousands of women — and men — raising their voices and expressing their protest against this confirmation. That is not “mob rule” as described by Sen. Grassley — it is democracy.

We want a Supreme Court nomination process that identifies candidates who support these values as they connect with each of our lives and throughout the public sphere.

We want nominees whose track records indicate they will uphold and expand labor rights, environmental protections, human rights and the right of all people to quality health care.

Kavanaugh’s history shows that he is quite willing to assault these values, and if placed on the Supreme Court he will continue to undermine them through his decisions for many years to come.

That’s why nurses say: Vote NO!