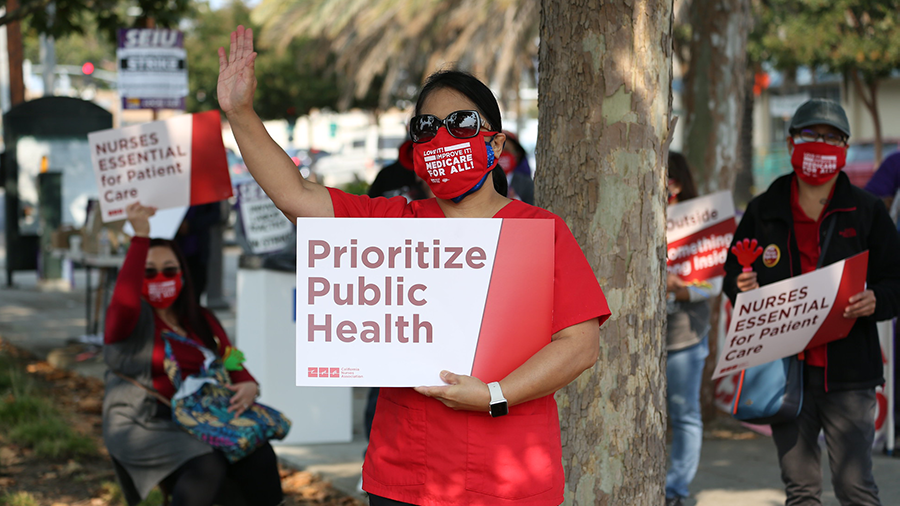 Amid a still raging Covid-19 pandemic the timing could not be worse for the rush to close another Los Angeles hospital.

Even with a modest slowing in cases, as recently as February 10, there were nearly 4,000 Covid-19 hospitalizations and over 140 daily deaths in Los Angeles County. This crisis is far from over, as the rising tide of virulent virus variants should also be a warning.

Yet Alecto Healthcare Services is pushing ahead with plans to shut the doors on Olympia Medical Center by March 31– even though the hospital reported more than 3,000 Covid-19 patient days between July 31 and late January, and it continues to be filled with Covid-19 patients.

Closing the hospital now will cause death and suffering among the city’s most vulnerable patients in the mid-Wilshire community who rely on Olympia, including the 60 percent of its patients covered by Medicare, and almost 30 percent by Medi-Cal last year.

It will further the appalling racial health disparities exposed again by the pandemic. Some 40 percent of Olympia’s patients in 2020 were Black, and nearly a fourth were Latino, in a county where the Black and Latino Covid-19 mortality rate is 153 and 268, respectively, per 100,000 residents, compared to 93 for whites.

UCLA has purchased the property. It should immediately take over operation of the facility, and maintain it as a full-service hospital, or provide the funding for Alecto to keep it open with no break in service at least for the duration of the pandemic.

All our public agencies, including the state of California, and UCLA should work together to ensure we do not allow Olympia to close, as sadly St. Vincent Medical Center in downtown Los Angeles did a year ago.

Surrounding hospitals have more than maxed out their capacity and playing a musical chairs game of ambulance diversions. Olympia acts as a critical pressure release valve within the wider network of Los Angeles hospitals.

It will stall transport along LA’s jammed streets producing delays in timely care as well as greater wait times for ambulances and paramedics put on hold at other over capacity facilities where emergency rooms are over-flowing, impeding them getting back on the road for other patients in need of emergency care.

At its hearing, the Los Angeles County EMS commissioners noted that the cumulative effect of a number of hospital closures in Los Angeles over the last decade has contributed to the lack of beds that has made this public health crisis so severe. They called on the Board of Supervisors to urge Olympia be kept open until at least September 30.

The Los Angeles City Council is poised to vote on a resolution co-sponsored by Council members Nithya Raman and Mark Ridley-Thomas saying it “supports the EMS efforts to work with Alecto Health, UCLA Health and Olympia Medical Center to delay the suspension of services for a minimum of six months.”

To lose this hospital now, we will be exacerbating not only this calamity, but also the next infectious disease outbreak, and other future public health emergencies, such as a major earthquake.

It is apparent that we cannot depend on private corporations, like Alecto, to make decisions in the best interests of the public when their focus is solely on business priorities, not public need.

During the last legislative session, the California Nurses Association sponsored a bill that would have blocked hospitals from closing during a pandemic, but due to pressure by the wealthy hospital industry, lawmakers stripped that language out.  California nurses will not rest until profit-driven hospital closures during a pandemic are ended by state law.

CNA, and the Olympia and UCLA nurses we represent, are dedicated to work with our elected leaders to insist that UCLA and Alecto demonstrate their responsibility to the community, especially in this time of a public health emergency. We must do whatever it takes to keep the hospital open and operating, with a priority on public health and safety.