Jeff Weaver, President of Our Revolution 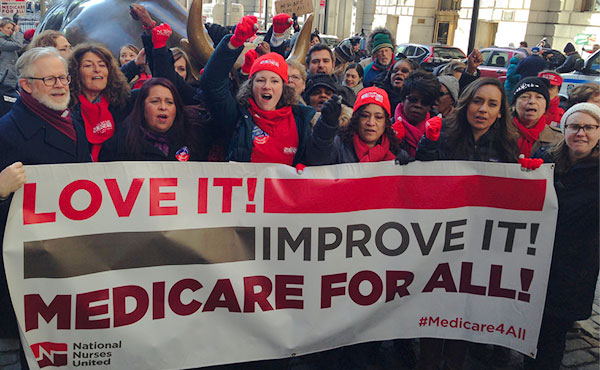 Senator Bernie Sanders announced that he's going to be introducing a Medicare for All bill in the Senate.

We all know that the Affordable Care Act was a critically important step towards the goal of universal health care. But 29 million Americans today still do not have health insurance, and millions more are underinsured because health insurance companies are making our health care unaffordable and inaccessible.

Bernie Sanders' Medicare for All bill puts power and choice when it comes to health care decisions right where it should be -- in the hands of patients and their doctors, because nobody should be squeezed by the insurance industry's bottom line.

Will you join us in telling Senator Bernie Sanders “thank you” for never giving up when it comes to universal health care for all Americans? Sign the thank you card today to say that you're with him.

Senator Sanders has championed universal health care for more than 30 years. Bernie has always stood up for the people, even if it means going up against the establishment. The insurance industry, which spent $146 MILLION in 2016 alone lobbying Congress, will say that universal health care isn't possible. Not only is it possible*, Medicare for All is the only way to solve our health care crisis.

That's why Our Revolution is joining with communities all across the country to win this critical fight. We're supporting Rob Quist, a strong advocate for universal health care, who is running for Montana's at-large Congressional district in the upcoming special election.

This isn't some fringe issue: 58 percent of Americans support a Medicare for All system**. Our issue is national, and it's personal. Too many Americans lie awake at night wondering how they'll pay for much-needed treatment or medications. Americans are dying of entirely preventable causes. Ensuring universal health care through a Medicare for All program is a moral imperative that we cannot ignore.

Join us in thanking Bernie Sanders for his leadership on Medicare for All, and say that you're all-in for universal health care.

Keep up the fight, because together we're transforming this country.

Medicare For All
Our Revolution