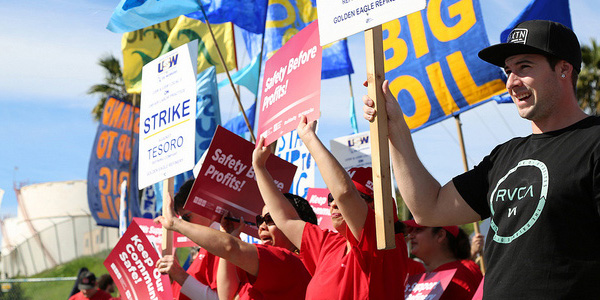 Stronger Together: United Steelworkers and Nurses stand up for safe work conditions!

Nurses support the United Steelworkers on their strike lines

Members of the United Steelworkers union on strike from their jobs at the Tesoro Golden Eagle Refinery in Martinez, Calif. got a major boost today from registered nurses around the Bay Area who joined their picket line to show support and share stories about why it's critical for workers to have a say in their work in order to protect the health and safety of themselves and their communities.

"Nurses are here today because so many of the conditions the steelworkers are facing are the same the nurses are facing," said Katy Roemer, an RN at Kaiser Permanente Oakland Medical Center. "They need the ability to shut down production when they identify health and safety risks."

The refinery workers reported that they are often forced to work mandatory overtime; required to work consecutive days for weeks without a day off; constantly asked to speed up the throughput of the refinery while at the same time pushed to cut corners; and ignored by management when they put in requests for equipment to be repaired or maintained.

When the refinery has accidents and gas flares, toxic substances and particulates are often released into the air. Pamela Luiz, an RN who works in the emergency room at Kaiser Antioch and also lives in Antioch, has resided downwind of the Golden Eagle refinery for 20 years. She said that asthmas rates in her community are alarming and every time there's a refinery release, the nurses observe many more people flooding the ER. She's constantly worried for her granddaughter, who lives with her and suffers from asthma.

"Before, you'd see more asthma cases with the spring and fall weather changes," said Luiz. "Now it's gotten to the point where it's year round."

Steelworker Rafael Zabat works on the "alki unit," a nickname for the "alkylation plant," where workers operate sophisticated equipment that takes waste gases from the refining process and, using sulphuric acid as a catalyst, converts them into a liquid that is used to blend high-octane gasoline. It's a complicated process that requires many different chemicals and materials to be held in balance and strict attention to various pressures, levels, and temperatures in order to run within safe parameters. 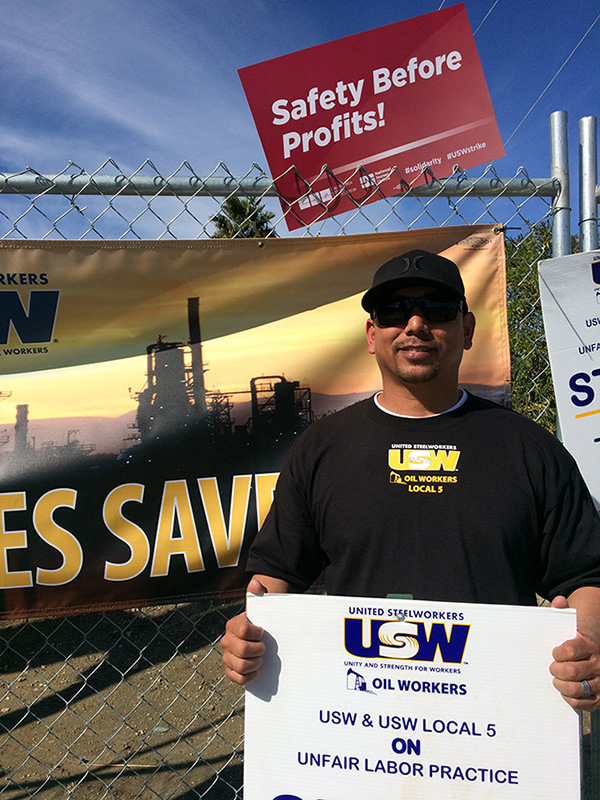 Rafael Zabat says his company was reluctant to maintain equipment because of lost productivity.

Zabat and his coworkers said that, for years, the company has been pushing the operators who control the "board" (kind of the master dashboard of all the equipment readings) to run much higher rates of throughput than the operators believed the system could handle. Sulphuric acid is also expensive, so at the same time, the company had been pushing workers to cut the amount of acid that they were using. Both practices are much harder and more corrosive on the equipment, and workers had over the years submitted multiple requests to management for the pipes to be fixed, cleaned, and maintained. But the company, reluctant to shut down the unit because any stoppage means loss of profits, either fixed equipment very slowly or not at all.

On Feb. 12, 2014, Zabat and another alki operator were putting a piece of equipment into service and checking how much sulphuric acid was still in the system. As they opened a valve, a pipe ruptured about five feet from where they were standing and sprayed both of their entire bodies with sulphuric acid. They immediately rushed to a safety shower and rinsed off as much as they could. They had been wearing personal protective equipment, but the outfit was designed more for flash fires, not chemical spills. "My face was burning," remembered Zabat. "It got in my mouth, on my lips, face, ears, neck."

The two were airlifted by helicopter to UC Davis Medical Center, where they were told they were lucky to have escaped with second-degree chemical burns. All the skin on Zabat's face bubbled and blistered up; he had scars for another six to eight months. He spent six months off work recuperating, during which the company dismissed his burns as "minor injuries" and pushed him to return to work earlier than he was ready. At one point during his recovery, before various providers had his workers compensation policy number, he received a $42,000 bill for the airlift from the helicopter company. His family was traumatized by the entire incident, and he himself had to go through some counseling before he could go back to his position.

Zabat still works on the alki unit; he would be reluctant to transfer to another area because he is as close to his coworkers as family. He said that the company appeared to shape up after he was burned, but now has fallen into their old habits of deferring maintenance. "It would be nice to see them have a proactive approach to safety instead of a reactive approach," said Zabat. "So this strike is for the safety of the workers and the communities around us." — Lucia Hwang