RNs ramp up #Nurses4Bernieâ€”on debate night and beyond! 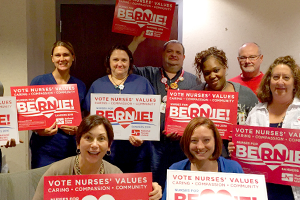 Over 200 NNU nurses “painted the town red” in Vegas on Tuesday, for the first Democratic debate. From marching down the strip, in support of Bernie, to cheering along with campaign staff in Bernie’s official watch party—NNU had a significant impact on making it known that Bernie’s values are nurses’ values.

The best part? What happened in Vegas—certainly didn’t stay in Vegas. NNU nurses and supporters also represented “Nurses4Bernie” at watch parties across the country. In Silver Spring, Maryland, NNU members spoke to a crowd of around 100 about why nurses believe in Bernie. In Oakland, CA, nurses and other labor members showed support by sporting temporary Bernie Sanders tattoos during a watch party at the NNU headquarters.

At a debate party in Echo Park, Los Angeles, RNs joined around 220 Bernie supporters and cheered along with a call for “political revolution.” 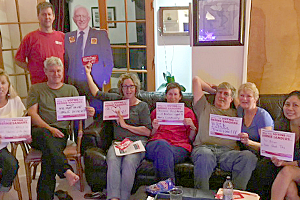 Check out the photos below for a recap of RNs on debate night and from some of the nearly 40 other Bernie Sanders parties nurses are hosting around the country this month.

Want to get more involved? Download a toolkit to host your own house party for Bernie (featuring Bernie info, Bernie Bingo, stickers and more). Every major public poll called Bernie the debate winner, and nurses are playing a critical role in the people’s movement that he is championing. Let’s keep it going—all the way to the White House!