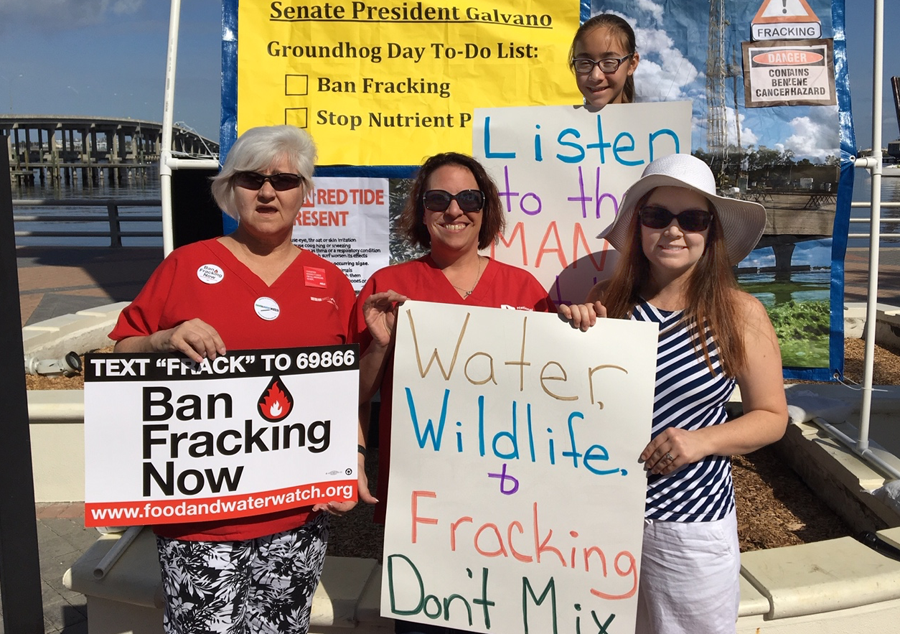 National Nurses United RNs are fighting to protect Florida’s drinking water with a ban on all forms of fracking for oil or natural gas in the state. The nurses joined other environmental activists on February 2 in Bradenton, Fla. for a rally to urging state Senate President Bill Galvano to vote in favor of a ban.

Ginnelle Stewart, an ICU registered nurse and NNU member, spoke at the rally about the public health hazards and the high human costs associated with fracking.

“Fracking and the disposal of fracking waste threaten drinking water,” said Stewart, “Florida has more available groundwater than any other state; it is the drinking water source for 93 percent of Florida’s population. Florida’s porous geology makes it vulnerable to groundwater contamination. Many of the chemicals found in fracking waste are known human carcinogens and lead to health hazards.”

A study out of Pennsylvania found that babies born within a mile of fracking wells are 25 percent more likely to have low birthweights and other health problems. A study published in JAMA found that people living near fracking wells were found to have 1.5 to 4 times greater chance of suffering asthma attacks. A Yale University research team found that carcinogens involved in fracking operation contaminate the air and may increase the risk of childhood leukemia.

Stewart commended Galvano for his recent promise to bring the ban to a vote on the senate floor for the first time in Florida history. But she said he still needs to do more.

“Now that Senate President Galvano has popped his head out to see this looming shadow over Florida’s water, he must champion this issue by ensuring all forms of fracking are banned,” urged Stewart.

NNU efforts to see a full ban on fracking passed in Florida began two years ago. If you are interested in getting involved with the effort email florida@nnoc.net.