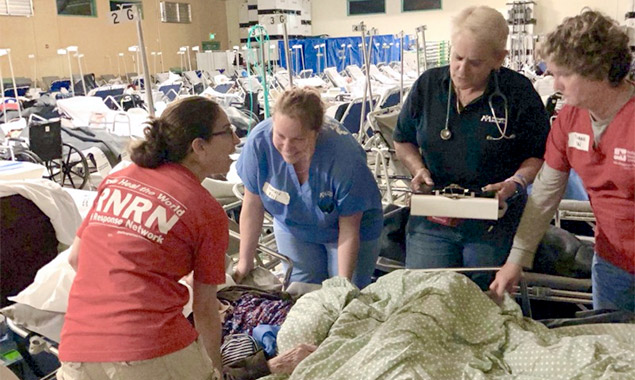 “People keep thanking me for being here and I tell them, no — I thank you! I’m so happy to have this opportunity to assist you. Nurses are empathetic so when we see the news about a disaster like Hurricane Michael, we want to be there so I feel really very privileged to be here.” ~ Julie Kure, RN UC San Francisco Medical Center.

Julie Kure is one of 24 registered nurses who traveled to hurricane-ravaged Florida from around the nation as part of a Registered Nurses Response Network (RNRN) medical relief mission in coordination with International Medical Corps. Michael has been ranked as the third most powerful hurricane to ever hit the U.S.

RNRN volunteers on the ground in Florida are providing much needed care in a variety of settings, including special needs and general population shelters as well as pop-up field clinics.

Diane McClure, RN, traveled from California and arrived in Tallahassee, just two days after the storm. She filed this report:

Most of our first assignments are in shelters in rural areas where many poor and elderly people live. There is concern that people may still be trapped and unable to leave their home. The hurricane hit fast and hard. The residents were taken off guard because they are used to having more time to plan. Most of the elderly people that have lived in this area their entire lives say that it is by far the worst hurricane they have ever experienced. The stories we have heard are heartbreaking. The hurricane was so strong that numerous tornadoes broke away, spun out of control and knocked everything down in their paths. Some towns have been completely wiped out. There is an island that literally no longer exists. Trailer homes were flipped and twisted as though they were just pieces of scrap metal. People are scurrying to cover their damaged roofs with tarps before predicted rains arrive. This will be a devastating situation for months to come.

Many of the patients in the shelters were evacuated from nursing homes or home health care situations. As often occurs with these types of disaster evacuations, many patients had to leave their homes quickly and were left with inadequate supplies of necessary medications. The RNs are reporting that the work is hard but extremely rewarding, with some shelters housing upwards of 300 evacuees.

RNRN volunteer, Julie Kure, described her first assignment at a 50-bed shelter in Marianna that was overwhelmed with people, including an influx of patients from assisted living facilities. “The power kept shorting out and we didn’t have enough oxygen tanks or medications. There were no doctors and we worked at our full scope of practice to keep people alive.” One woman was brought to the clinic, in very poor condition, having had no food or water for three days. She was passing out, had a very weak pulse and low blood pressure. After receiving fluids and nutrition, the woman began to revive and by the time Kure moved to her next assignment, she was pleased to see the patient appeared much better. 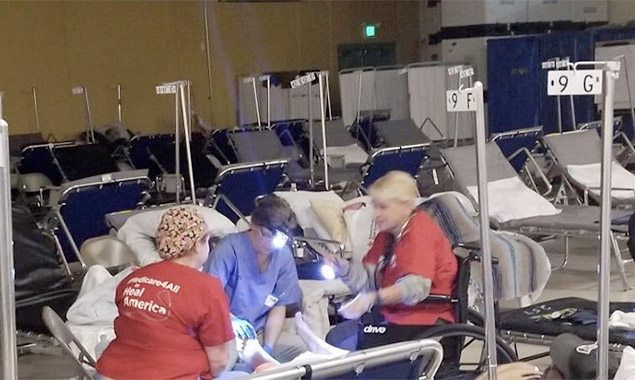 At her next assignment, Kure helped operate a pop-up field clinic in Chattahoochie, which is 44 miles from Tallahassee and one of the poorest counties in the state. The closest ER and acute care hospital 20 minutes away was overwhelmed with patients. EMT volunteers and vehicles are stationed next to the field clinic to respond to calls from the community, which continue to come in as power and phones are intermittently restored. The pop-up field clinic was created because “the EMT were getting a lot of walk-ups with people who have non-emergency medical needs. Now they are directed to our field clinic, so EMT can focus on emergency transport, “ explained Kure.

RNRN volunteer, Venessa Soldo-Jones, is from Minnesota and has worked over two decades as a firefighter and paramedic before becoming a registered nurse. She was initially assigned to a “special needs” shelter in Tallahassee. These shelters form an essential part of Florida’s emergency response plan. They are housed in a fortified section of a school with generators that operate the first few days after the storm. They are for people with medical needs that require electricity, including oxygen, CPAP, and refrigeration for insulin and other medications.

When Soldo-Jones arrived, she was part of a team that relieved local nurses that had been working 24 hours a day since the storm hit. These nurses were caring for patients despite the fact that their own homes were in the path of the storm. She and the new crew created a system for clearly identifying each patient with wristbands, and documenting their medications. “We didn’t have any electronic devices, but a lot of us are old school, so we knew how to set up a system using paper,” she explained with a laugh. 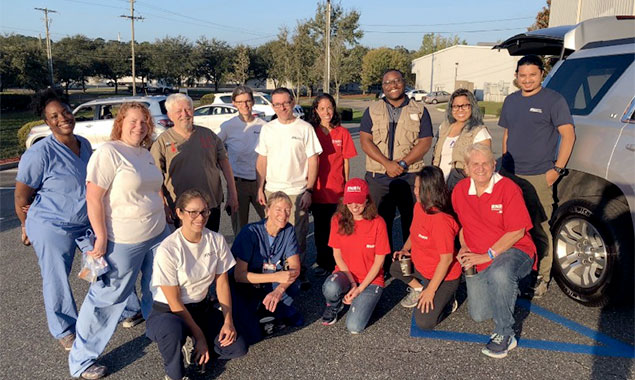 RNRN volunteer Terry Tate, an oncology nurse from Louisiana, was also deployed to a special needs shelter. Tate, who has volunteered after several other hurricanes, noted the coordination of Florida’s emergency response. “We hit the ground running. The supplies are here and we’ve received excellent support. On site, everybody present is hands-on; everybody does what’s needed. It’s the best team I’ve ever worked with,” she said.

“We started with 47 patients and now we’re down to 5. These are all patients that can’t live on their own. Some were living in assisted living or hospice before the storm, or had caregivers at home. When the hurricane comes all of these arrangements are disrupted, since assisted living facilities are damaged and homes are destroyed, including those of the caregivers. We can’t discharge patients until the services and housing arrangements they need are found for them. Meanwhile it is honor for me to represent RNRN as part of the team that is giving them the care they need. “

Many of the shelters that opened in schools last week near Panama City, are being moved to other locations so the schools can reopen to students. RNRN volunteers are moving to where they are needed, including to a state shelter being set up to centralize operations near Tampa.

The need for volunteer RNs in Florida is ongoing. If you are interested in applying for an RNRN deployment, please visit:

Help get nurses where they are needed most. Donate to RNRN: