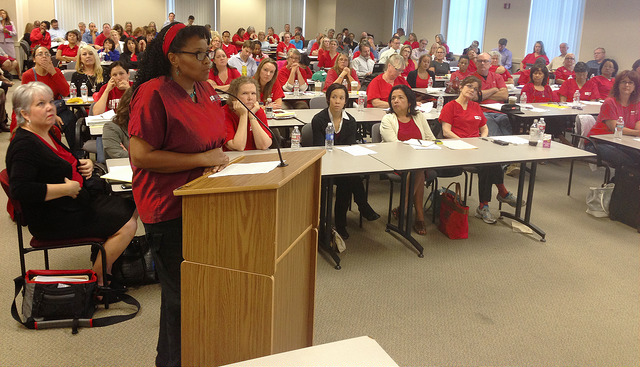 Rhonda Watts, an RN at Arrowhead Regional Medical Center in San Bernardino, testifies at the hearing.

“When I came down the hallway today and I heard the roar from the room I thought I was in the wrong place. As a labor representative one of the problems we frequently find in our membership is complacency and to see the room filled today with organized labor and everyone coming out on the issue reinforces my belief in organized labor and makes me proud to be up here as a labor representative for you today, so thank you.”
Dave Harrison, Labor Representative CAL/OSHA

More than 80 CNA members from across California attended a Cal/OSHA hearing yesterday on Safe Patient Handling. Registered Nurses (RN) from every major hospital chain and every region of the state gave compelling testimony in support of strong, concise regulatory language to protect patients and staff from injuries caused by lifting and moving patients. The hearing marked the next step towards adoption of fully-developed regulations Cal/OSHA will then use to enforce Assembly Bill 1136, the Hospital Patient and Health Care Worker Injury Protection Act, designed to protect RNs and other health care workers from patient handling injuries and to provide patients with safe and appropriate care.

Each year, thousands of RNs suffer back and musculoskeletal injuries while providing care in California hospitals. Many RNs are forced out of their occupation due to the severity of their injuries. The passage of AB 1136 was a significant victory for CNA. Similar legislation was vetoed five times by former Gov. Schwarzenegger. The bill was finally signed in to law by Gov. Brown in October 2011.

During the public hearing, CNA members’ testimony made it clear that despite enactment of AB 1136, RNs continue to struggle with inadequate safe patient handling policies. “We do not have any nurses aides, nor do we have a lift team, so it’s just us to lift the patients,” testified Debra Amour, an RN in the ICU at Seton Medical Center in Daly City. “When you have a 400 pound patient who has a leg wound for example, it can take the entire staff to hold the leg while the dressing is changed, which can easily take twenty minutes. During that time, there is no one in the unit watching the other patients,” said Amour.  “We were trained years ago on the Hoyer lift, but the first time we used it, it almost fell over with a patient in it, and now it’s gone. We haven’t seen it since,” said Amour. Other nurses echoed Amour’s testimony, stating that there was little to no training or equipment at their facilities.

“Since the law was passed, CAL/OSHA has already cited some hospitals for patient handling violations,” testified CNA Board Member, Margie Keenan, a RN at Long Beach Memorial. Keenan urged the Cal/OSHA Board to adopt stronger language to protect direct care assignments. “RNs perpetually grapple with razor thin staffing margins, and it’s our position that the clear language in AB1136 protecting direct care patient assignments must be added to these regulations in order to ensure enforcement and to provide a safe environment for workers and patients.”  Keenan expressed concern that language in the current draft could be used “to undermine the position and authority of the RN as the primary coordinator of care,” and urged the board to amend the language to clarify and preserve the central role of the RN.

Following the public testimony, several Cal/OSHA Board members commended the nurses for their testimony and noted the need for additional training, equipment, and staffing. The hospital association, whose representative made a very mild mannered statement during the public hearing, submitted written formal comments intended to weaken the proposed language, including recommendations to weaken training and recordkeeping requirements and the role of the RN. The stakes are high for both industry and workers. The California law is currently one of the best in the country. Strong regulatory language will set a ground-breaking precedent for legislation in other states and on the Federal level.

Over the next few weeks, Cal/OSHA will review the nurses’ testimony – and any other submitted statements.  Based on those comments, Cal/OSHA may revise the proposed regulations. A fifteen day public comment period will follow upon release of the revised regulations. We have to be vigilant to prevent industry from weakening the law in this regulatory phase. Stay tuned!