In Pursuit of Social Justice, Unions are the Answer

RNs and caregivers at UCSF show solidarity and strength

Some say it has been a difficult year for unions.

I say, I’m sticking with mine.

In fact, you couldn’t pry me away from it. Let’s just say the union is the great equalizer, the place where every issue is ultimately addressed in the field, in the trenches, in the workplace, where people’s rights are on the line.

Unions are where the very stuff of our survival — wages and benefits, workplace safety and workplace justice, human rights and bargaining rights — come into play. Unions are the only way working people have ever found the voice — and power — they need to fight and win against giant corporations, and the billionaires who control them.

Labor unions are where the real battles that define our lives are lost and won, where consciousness is raised, where justice is served.

Unions have narrowed the wage gap between men and women, between white people and people of color. The civil rights movement aligned itself with unions because they recognized the union’s central place in workplace democracy and the struggle for social justice. Martin Luther King Jr. died during the Memphis sanitation-workers strike, just as he was entering into a broader fight that engaged the working class on every level.

Today, despite the efforts of the rich and powerful to redefine us, to eradicate unions and turn all of us into fodder for the churning wheels of greed, that’s not the story I see. I see unions standing up for what we most need today; humanity, security, justice, courage. These are American values and they were built by working people. And they will survive because working people have found ways to stand together for decades. Some have died to be a part of something greater than themselves, to be in solidarity forever and union strong.

A long time ago I realized that the handful of super-rich are afraid of the working class because there are more of us. That is by design, so that the powerful can maintain a steady workforce to serve their needs. What the working class must understand is that there is strength in our numbers. Organized together in common cause, we are an unstoppable force. Our power has been visible in historic strikes and actions that have brought breakthrough gains for working people across the globe.

So some may say it’s a bad year for unions, but here’s what I see. Years of unions fighting to survive and win have made us strong. Now we’re joined by a world of voices demanding equality, and people more willing than ever to stand and defend it. Unions have been a part of that struggle for decades, indeed, at the center of it. Now, surrounded by like-minded voices, we are raising our own voices louder than ever before.

Let me tell you how. 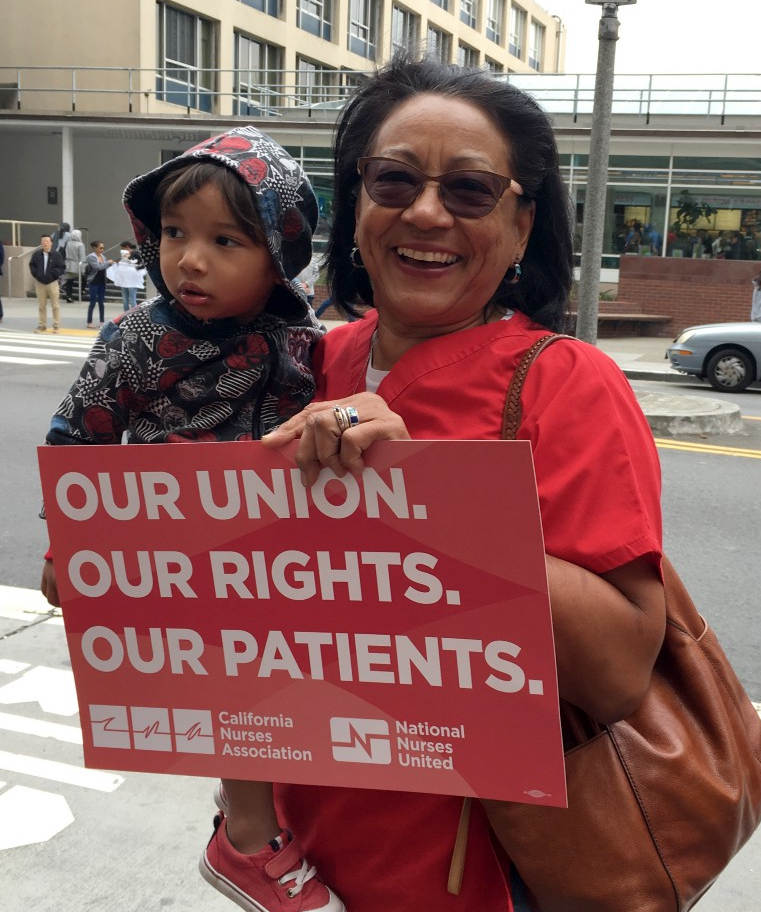 Today, Labor Day, NNU RNs across the country are defying the odds, taking strike votes for workplace parity and economic justice, standing to defend their patients.

This year, 14,000 RNs at the University of California are fighting to win a contract to protect their patients and themselves, for the future.

Kaiser RNs, 19,000 strong, were willing to strike for their patients — and their power and unity won a landmark contract.

Thousands of RNs at Johns Hopkins, and across the country, are fighting to join their NNU sisters and brothers in a powerful union of RNs, standing up for patients and caregivers against corporate healthcare.

Teachers this year have taken to the streets unwilling to bow to greed and deception, defending their and their students’ rights.

Last month, the AFL-CIO, led by former miner and current union president Richard Trumka, defeated right-to-work-for-less in Missouri in a historic victory for workers and our communities.

Veterans Administration union workers, including thousands of NNU RNs and other union workers in AFGE, stood against Trump’s executive orders to stifle unions, and won a reversal.

Rank and file RNs campaigned to support Andrew Gillum in Florida, who ran on a platform that included Medicare-for-All, and were instrumental to his winning the primary.

These things we did together. If we want to fight oppression, the formula is simple. United we stand. Divided we fall. It’s time to join a union.