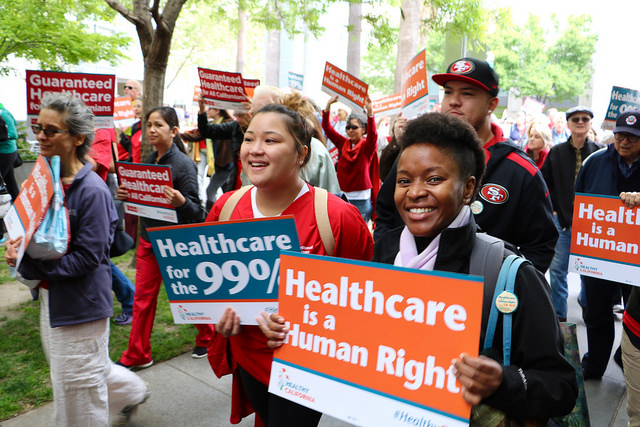 Registered nurses and other healthcare advocates are celebrating the California Senate Health Committee's passage this week of SB 562, the Healthy California Act, a bill to establish an improved Medicare for all type system in California. Full details of the bill may be viewed here http://bit.ly/2ng5hUg

Prior to the hearing, over a thousand supporters, including members of the California Nurses Association/National Nurses United, held a spirited rally at the Sacramento Convention Center followed by a colorful march to the State Capitol for the Senate Health Committee hearing.

“The most important thing today was the breadth and depth of support by the dozens of people lining up to back the bill, representing 250 organizations across the state. These are organizers who are going to be with us to make the Healthy California Act the law of the land in California,” said RoseAnn DeMoro, executive director of CNA/NNU, the primary organizational sponsor of SB 562. 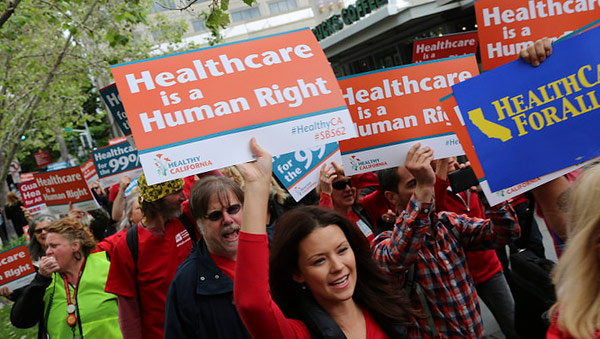 The rally kicked off with comments from CNA/NNU leadership, followed by Dr. Paul Song, co-chair of the Healthy California Campaign, Mahul Thakker, of the Business Alliance for a Healthy California and bill co-authors, Senators Ricardo Lara and Toni Atkins.

"Why is this fight important for me," asked Zenei Cortez RN and CNA/NNU Co-President. "As an RN for almost 40 years I find it very difficult to see patients who come in for surgery but when they register they find out they have a $5000 copay and they cancel the much needed surgery because they can’t afford it. That breaks my heart.  So this fight is important to me as it is for all of you. The people that came in on the bus with me came from the community – I thank you for joining with the nurses, traveling here to Sacramento to win this fight with us. The time is now."

“From our perspective as nurses, for many years it felt like we were in this fight alone, but look at us today. We have people here from all walks of life. We have a coalition that is so awesome and we have the people of California that want single payer,” said Malinda Markowitz RN and Co-President of CNA/NNU.

“In the run up to this day we’ve been meeting with thousands of Californians all across the state in meetings, rallies and town halls," said Bonnie Castillo RN, CNA/NNU Associate Executive Director. "The combination of nurses working with all of you community organizers is a winning combination. We are demonstrating to our elected officials what Californians need and that’s a fair, just and equitable healthcare system for all.

“Nurses understand that we are in a healthcare crisis that is only going to get worse for our families and communities. Nurses know it is a moral imperative to put an end to this market-driven system,” said Castillo.

“There are still 2.9 million people who don’t have healthcare in our great state. We are not going to rest till every single Californian has access to comprehensive healthcare," said bill co-author Sen. Ricardo Lara. "We know that those who don’t have access to healthcare have significantly worse outcomes and are disproportionately people of color and families from low-income communities. Americans continue to pay more than any other industrialized nation and get less. How does this make sense? That we as the richest country on the globe pay more for healthcare and get less? That is not right and we have to change that.

“It’s unbelievable that we could live in the richest state, in the richest nation in the world and yet people don’t have access to healthcare. That is wrong,” said bill co-author, Senator Toni Atkins. “California will not go back. We are not standing still. We are going forward.”

As marchers headed to the Capitol building through the streets of downtown Sacramento they chanted: “When the system fails us, what do we do? Pass S-B-5-6-2,” and “California here we come, 562, let’s get it done!”

Once marchers arrived at the Capitol, the Senate Health Committee hearing room quickly became packed with enthusiastic supporters of the bill - the crowd spilling out of the chamber and filling the hallways. 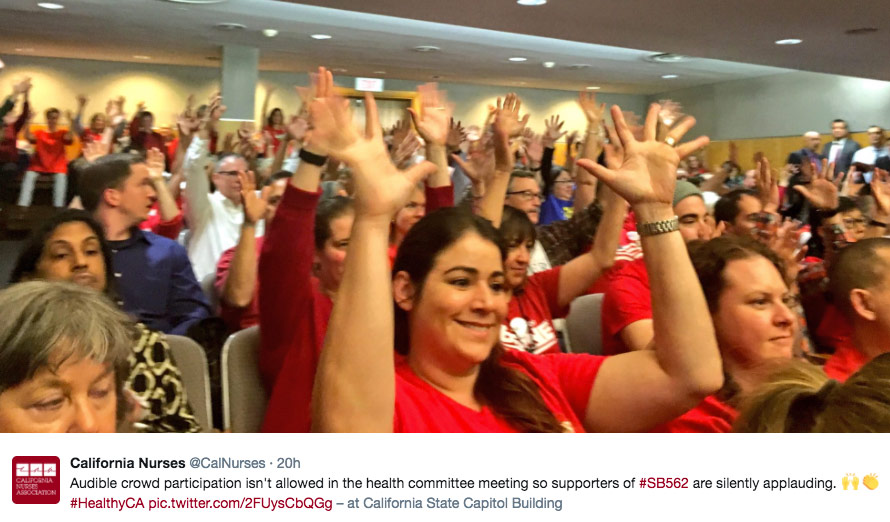 Senators Lara and Atkins, introduced the bill followed by Michael Lighty, CNA/NNU Public Policy Director’s opening statement. “Registered nurse are on the front line of patient care as you know and I’m proud to represent the 100,000 RN members of the California Nurses Association/National Nurses United, the primary sponsors of this bill to provide universal coverage for all Californians,” said Lighty.

Many supporters with a wide arrange of affiliations from throughout the state, took turns at the microphone to urge passage of the bill during the public comment period. These included California Labor Federation, Latino Coalition for a Healthy California, California Alliance of Retired Americans, California Teachers Association with 325,000 members, California Federation of Teachers with over 100,000 members, and California School Employee Association with over 240,000 members. A representative of the California chapter of Physicians for a National Health Program (PNHP-CA), stated, “our 3000 members are in strong support of this bill because it will allow us to practice much better medicine than we are able to in the current system.” 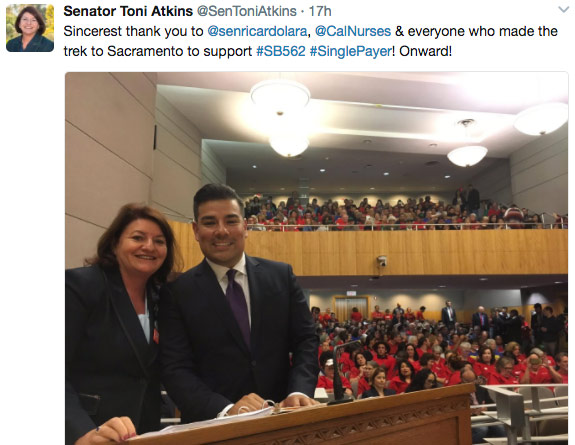 After more than two hours of debate and discussion the Senators took a vote and pased the bill by a vote of 5-2.

To see photos of the march and rally click here.

For resources and information about the Healthy California Campaign, click here. 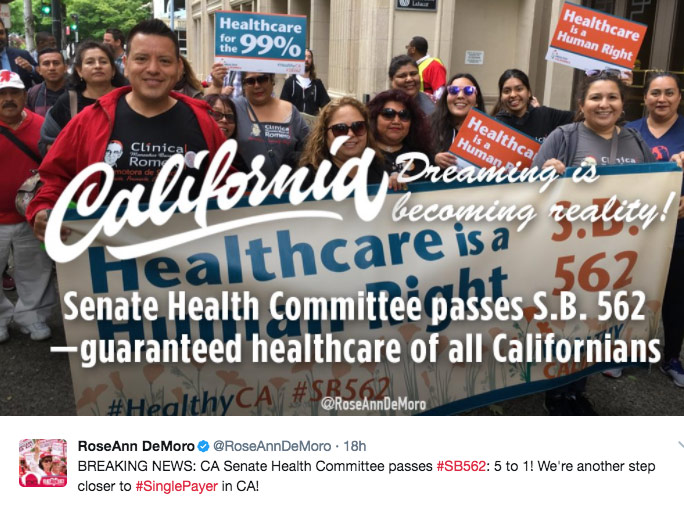