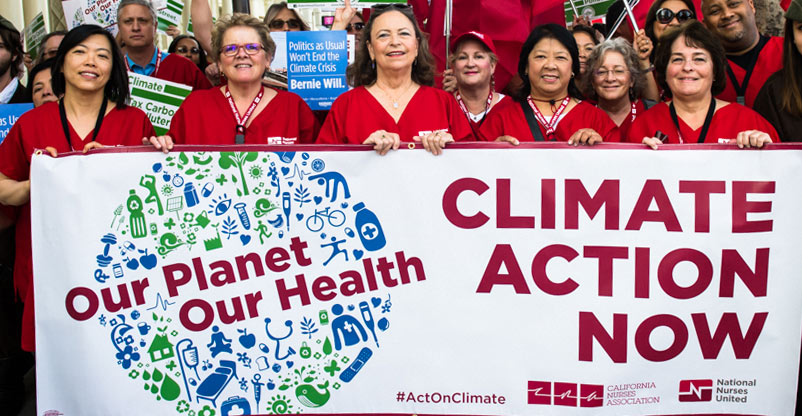 National Nurses United condemns the Trump Administration’s callous and ill-advised effort to undo the historic Clean Power Plan of 2015 that seeks to reduce toxic carbon pollution from power plants and address the devastating and deadly effects of climate change.

The Trump administration’s cynically so-called “Affordable Clean Energy” rule is an attempt to appease the coal industry at the cost of the nation’s public health. This rule is neither clean nor affordable and the cost to society and our planet is potentially catastrophic.

The new rule aims to keep coal-burning power plants active even as they pollute the air with dangerous particulates that are linked to heart and lung diseases, as well as asthma and bronchitis. The Environmental Protection Agency (EPA) concedes these power plants are dangerous to public health, noting that by its own projections, the proposed rules could lead up to 1,400 premature deaths each year by 2030.

In addition, the EPA analysis finds that the proposed rules would trigger an estimated 48,000 new cases of asthma and lead to at least 21,000 school days missed annually by 2030. By comparison, the Clean Power Plan was expected to avoid 3,600 premature deaths, 1,700 heart attacks and 90,000 asthma attacks annually by 2030, according to the EPA.

We know that currently more than 8 million deaths worldwide are directly attributable to air pollution, primarily from burning fossil fuels. We know that coal burning power plants spew greenhouse gases that stoke climate warming. We know the scientific basis for global warming is indisputable and that climate change is linked to widespread drought, heat waves, wildfires and flooding in the U.S. and internationally.

As nurses, we demand that our government take the bold action that is needed to challenge the political and economic power of the fossil fuel industry. A legitimate government puts public health and safety, and that of the future generations, above all else, anything short of that would be a violation of public trust and constitute an illegitimate government.