Nurses sound a CODE BLUE in D.C. on Fast Track and TPP

With the White House and some of the biggest multinational corporations lobbying Congress to “fast track" the Trans-Pacific Partnership, a massive trade deal between the United States and 11 other countries, National Nurses United today converged on the nation’s capital to explain that what’s good for investors’ balance sheets is not necessarily good for patients.

“Nurses are patient advocates—and by extension advocates of our patients’ families and our communities—and we are here to sound a Code Blue on fast track,” said RN Deborah Burger, a member of the NNU’s Council of Presidents. “While there are many good reasons to reject fast track, the nation’s registered nurses are particularly concerned about these trade agreements’ threats to public health and safety.”

She points to pharmaceutical corporations that would be given years more of monopoly pricing practices on patents for high-priced, brand-name drugs to block distribution of competitive, cheaper, lifesaving generic medications. “That is especially critical for people suffering from cancer, HIV/AIDS, hepatitis, and other illnesses in developing countries as well as in the United States,” she said.

Burger was one of dozens of nurses to attend a press conference today with Rep. Rosa DeLauro (D-Connecticut) urging lawmakers to reject fast track legislation for the TPP. Described by former U.S. Labor Secretary Robert Reich as “NAFTA on steroids,” the TPP is largely being negotiated in secret. The Obama administration and Republican lawmakers want Congress to approve fast-track authority, which would require Congress to ratify the treaty but relinquish its Constitutional authority to amend the trade pact in any way. 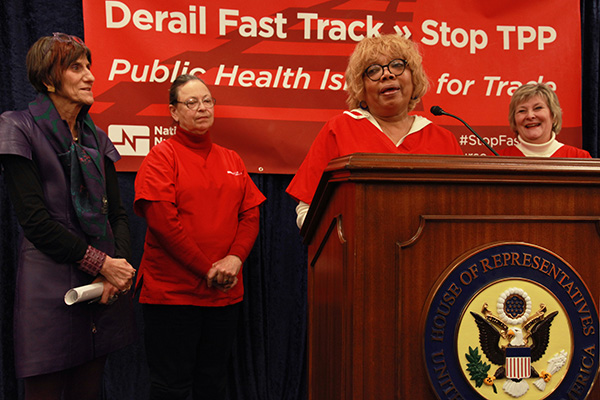 Beverly Van Buren, RN: "My pastor said 'sometimes, you have to fly like an eagle.' Today I am flying for my patients and their families."

"We say no to any provision in any trade deal that threatens to raise the price of drugs in the name of profits for big pharma. The middle class simply cannot afford it,” DeLauro said.

RN and NNU Co-president Jean Ross says this all does not bode well. And while the public has no access to the negotiations between U.S. trade officials, business executives, and their foreign counterparts, leaked documents and NAFTA provide us a glimpse of what the future might look like under the TPP.

“So no matter what the will of the people in any particular locale, state and nation, these trade agreements can supercede statutes that protect the people’s health and safety. Currently, for example, Lone Pine Resources, Inc., a Calgary-based oil and gas company, is suing the province of Quebec under NAFTA because the provincial government has imposed a moratorium on fracking,” Ross said.

Lone Pine Resources claimed the Quebec government was infringing on its profits and that either that law must be overturned or the people of Quebec must pay compensation to the corporation.

"Will the state of New York, which recently also banned fracking, be forced to compensate oil and gas companies because the state government stood up to protect the drinking water of New Yorkers?” she asked.

Similarly under NAFTA, Canada was forced to lift a ban on a gasoline additive called MTBE banned in the United States as a suspected carcinogen, after a corporate challenge. MTBE is associated with human neuro-toxicological effects, such as dizziness, nausea and headaches and found to be an animal carcinogen with the potential to cause human cancer. 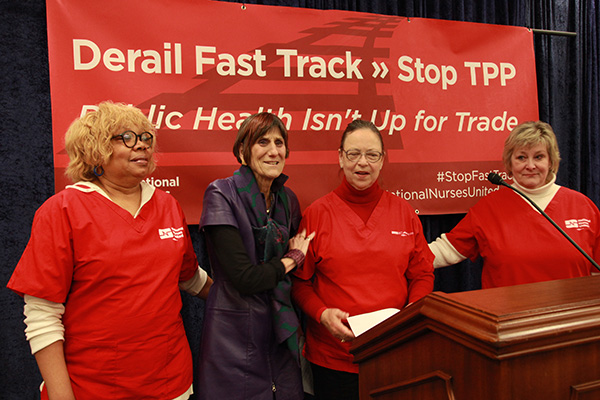 “The TPP would require us to allow food imports if the exporting country claims that its health and safety laws are ‘equivalent’ to our own, even if they violate the key principles of our food safety laws,” said Van Buren.

That’s problematic, she said, because U.S. food safety regulations currently need to be strengthened, not weakened.

“The U.S. Food and Drug Administration currently checks just 2 percent of imports for contaminants (including drug residues, microbes and heavy metals), according to one study, compared to 20 to 50 percent in Europe, 18 percent in Japan and up to 15 percent in Canada,” Van Buren said. “And when the FDA does inspect seafood imports, it looks for residues from only 13 drugs. In contrast, Europe tests for 34 drugs. That means overseas fish farms can be using a range of drugs for which the U.S. doesn’t even screen."

Several TPP signatory countries are significant seafood exporters and some have had serious problems with contamination.

DeLauro joined the nurses in exhorting lawmakers to reject fast track, and also offered a personal note of thanks to NNU and nurses across the nation.

“I could not have survived ovarian cancer without great nurses 30 years ago. . . the nurses who could look in my face and tell if it was a good day or if it was a bad day,” she said. 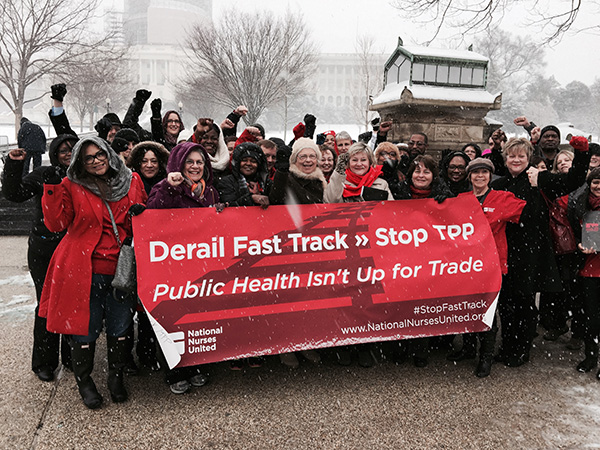 The cold can't stop these nurses!