Nurses Say Yes on I-1631, Building a Cleaner Future for Washington State 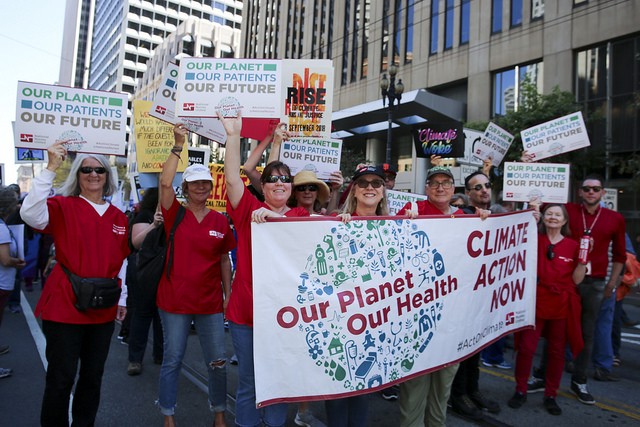 Registered nurses are very familiar with the negative health impacts of carbon pollution from fossil fuel burning. After all, the illnesses we treat at the bedside—including increases in asthma, bronchitis, and heart and lung disease—often begin in our patients’ communities, as a result of the polluted air they breathe, the tainted water they drink.

Because we are duty bound to protect our patients, nurses are standing up to say, “Enough!” to the biggest polluters, multi-national oil companies, who have, for too long, put profits above public health and safety.

That’s why National Nurses United (NNU), the largest union of registered nurses in the country, strongly supports the state of Washington’s Initiative 1631.

This initiative would create the nation’s first carbon pollution fee to be levied on companies that are the largest polluters. The fee would generate approximately $1 billion a year that would be invested in building a clean energy infrastructure for Washington.

Funds would not only reduce 25 million tons of asthma- and illness-causing pollution per year (great news for the health of Washington patients), they would also ensure workers in the fossil fuel industry have a just transition to the 41,000 good-paying, locally hiring jobs expected to be created in renewable energy.

Nurses know that it is critical for workers to be able to support their families, while also working at jobs that do not destroy the planet and threaten their family’s future. We are thrilled that this measure is the first of its kind in the country to concretely address the just transition of workers from the fossil fuel industry to clean energy.

Initiative 1631 would also work to increase the sustainable supply of clean drinking water, strengthen a community’s ability to respond to hazards and disasters (especially critical in light of the climate crisis), and assist communities hardest hit by air pollution.

In saying an emphatic, “Yes on 1631!” NNU nurses join a diverse coalition of fellow labor unions (workers are leading the way in protecting working families!), along with environmentalists, communities of color, local tribes, and everyday people throughout Washington state. In fact, RNs think this initiative is so important that nurses with NNU’s Environmental Justice working group have even been phone banking in support of the campaign.

Of course, the oil companies will spend millions trying to oppose 1631, but the people will have the final say. This initiative gives Washington voters the chance to lead the nation in holding the biggest polluters accountable, while protecting public health and safety with a shift to clean energy infrastructure.