Nurses Oppose the KXL Pipeline - and All of Labor Should Too 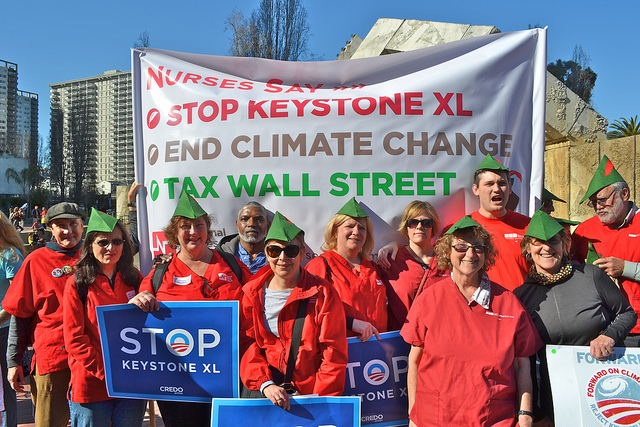 Nurses at Stop Keystone rally in San Francisco Feb. 17, also call for a tax on Wall Street speculation with portions of the revenue to go for fighting climate change

Noticeably absent from President Obama's "fix-it-first" program for rebuilding America's crumbling infrastructure, highlighted in his State of the Union speech, is, so far, the controversial Keystone XL Pipeline project. Let's keep it that way.

There's heavy pressure from the fossil fuel industry, the politicians they influence, conservative Canadian interests, and some construction unions in the U.S. for the pipeline. But it's not just the President's decision. It's up to all of us to put the pipeline in mothballs and leave the heavy tar sands crude oil in the ground.

National Nurses United, the largest U.S. organization of nurses, has joined with a growing climate movement, many ranchers and farmers, First Nations leaders, most Canadian unions, several other U.S. unions such as transport and domestic workers unions, and young people rightfully alarmed over the ecological impact to oppose Keystone XL.

Nurses already see patients sickened by the adverse effects of pollution and infectious diseases with a worrisome rise in asthma, respiratory and heart ailments, and premature death linked to air pollutants and the spread of water and food borne pathogens associated with environmental contaminants.

Second, the corrosive liquefied bitumen form of crude the pipeline would carry is especially susceptible to leaks that can spill into farmland, water aquifers and rivers on route. Following the rupture of a pipeline near Marshall, Mi in 2010 state officials found more than half the residents in communities along the Kalamazoo River reported respiratory ailments and other symptoms.

Then there's the broader consequences of a project NASA scientist James Hansen calls "the biggest carbon bomb on the planet" and climate change activist Bill McKibben says would nearly double the atmosphere's concentration of carbon dioxide if all the oil in those tar sands is burned.

Carbon emissions are a major factor in intensifying climate change. Higher air temperatures, for example, can increase bacteria-related food poisoning, such as salmonella, and animal-borne diseases like the West Nile virus.

And that's just the proverbial tip of the melting iceberg considering the devastation that will come with rising sea levels, intensified "weather events" like droughts, fires, floods and storms, mass dislocation of coastal populations and mass starvation that may well be the legacy of our failure to address climate change.

Public health costs from fossil fuel production in the U.S. through contaminants in our air, rivers, lakes, oceans, and food supply today are pegged at more than $120 billion every year by the National Academy of Sciences. The Environmental Protection Agency has concluded that exposure to particulate matter emitted from fossil fuel plants is a cause of heart attacks, breathing difficulty, and long term respiratory illness including asthma, and reproductive, developmental, and cancer outcomes.

Some unions, desperate for needed jobs in a persistent recession that continues to plague American families, are lobbying for Keystone XL. But it's like harvesting for fools gold.

The actual number of jobs that will be created is far less than has been claimed by the industry and its allies, and the U.S. State Department has now conceded that once the project is built, the number of people needed to operate and maintain the pipeline may be as few as 20.

As fossil fuel production has become more capital intensive, employment in the sector has fallen, according to a 2012 report by the International Labor Organization and the United Nations Environment Program. In the U.S., for example, coal production has increased by one-third since the 1980s, but employment has fallen by 50 percent.

Far more jobs would be created by converting to a green economy, notes economist Robert Pollin in his book "Back to Full Employment." Every $1 million spent on renewable clean energy sources, he calculates, creates 16.8 jobs, compared to just 5.2 jobs created by the same spending on fossil fuel production.

And union members families too are exposed to the health risks of the tar sands production and transport, as well as the devastating effects of climate change.

Finally, stumping for the Pipeline puts labor in league with the most anti-union, socially and politically regressive corporate interests in the U.S., such as the oil billionaire Koch Brothers, the American Petroleum Institute, and other energy corporations generally, abetted by the rightwing politicians who carry their agenda.

The future for labor should not be scrambling for elusive crumbs thrown down by corporate partners, but advocating for the larger public interest, the reputation labor deservedly earned in the 1930s and 1940s, the period of labor's greatest growth and the resulting emergence of a more egalitarian society. Today labor should be on that path again, uniting with the very coalition of those opposing the Pipeline and working to rein in the frightening consequences of climate change the Pipeline would hasten.