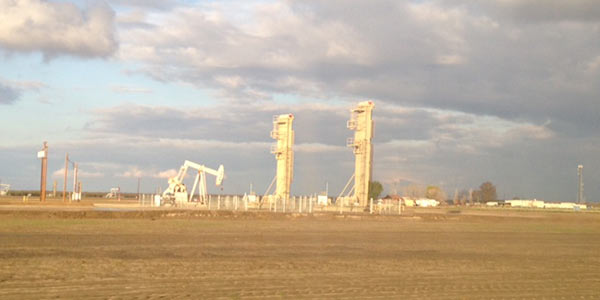 Nurses met up early Saturday morning at Oscar Grant plaza in Oakland for a day-long exposure and solidarity bus tour of the Central Valley to learn about the devastating impacts of fracking, the dangerous process of drilling and injecting water and chemicals into the ground at a high pressure in order to release natural gas and oil. 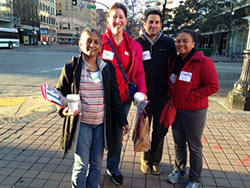 Representing nurses with the California Nurses Association, Kaiser San Jose RN Puspha Patel, Kaiser Oakland RN Clarita Griffin, and Watsonville Community RN Jennifer Holm joined the rest of the group in Oakland to start the tour. A Valley resident herself, Bakersfield Memorial RN Sandra Reding also met up with the rest of the group later in the day.

On the drive down to the Central Valley, nurses conversed with others on the tour about the intersection of labor and environmental justice and about what a just transition would really mean. Nurses talked about how profit motives of their hospitals are leading to poor patient care and deteriorating working conditions in some of the most environmentally impacted communities. 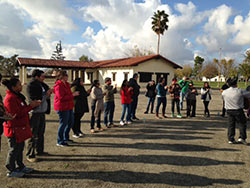 The first stop was the Center on Race Poverty and the Environment (CRPE) in Delano. Over lunch, the tour group met up with workers and organizers in the area who gave us a briefing on some of the general struggles around pesticide toxins, pollution from oil operations, and other polluting operations, including fracking, concentrated in the Central Valley.

After lunch, the tour headed to Forty Acres, a plot of land in Delano that became the headquarters of the United Farm Workers of America. Standing in front of one of the buildings in which Cesar Chavez fasted, the group discussed the work and commitment of previous generations and the importance of remembering all that was sacrificed for the rights workers enjoy today. The group also shared dialogue around the importance of unionizing and collective power. Back on the road after leaving Forty Acres, nurses were able to connect more with each other and the others on the tour-- they talked about their shared struggles across facilities and the necessity of unity both among nurses and with their communities and other workers. 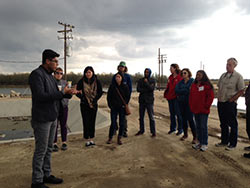 The next stop on the tour was an oil-processing site completely surrounded by olive tree groves as far as the eye can see. Without knowing exactly where the oil-processing site was, it would be nearly impossible to find-- the site was hidden at the center of miles of agriculture.

A CRPE organizer informed the group that they were once witnesses to an oil spill at the site. They took photos and reported it to authorities who initially denied any spill had occurred. The refinery eventually treated the spill by burying it. Later, dozens of nearby residents were evacuated from their homes due to lethal toxicity levels in their soil.

The next stop was a site where chemical-filled fracking wastewater meets fresh water. The resulting diluted wastewater, still swirling with toxins, is sold to farmers for watering the plants we consume. Although farmers initially refused to purchase the diluted wastewater, the current drought has left them no choice. Jennifer – the nurse from Watsonville – later remarked, "nursing 101 is that contaminated plus non-contaminated only leaves you with more contaminated." 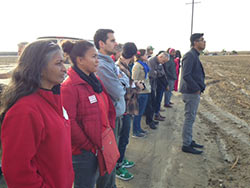 Leaving the site, the tour guides pointed out the many fracking sites around the area -- too many to count. The group talked about the dangers to communities and about the occupational health and safety issues faced by workers in the oil and gas industry. Because many of the chemicals used in the fracking process are considered proprietary, industries are protected from disclosure. Nurses spoke to the difficulty of effectively diagnosing and treating a patient without knowing what chemicals to which they may have been exposed.

The last stop on the tour was Sequoia Elementary School. The school is in the center of several fracking wells (six wells are within a quarter mile of the school and something like 30 are within 1.5 miles of the school). There are no regulations on how close the fracking sites can be to homes and schools. Despite many students coming down with unusual health problems (headaches, asthma, unexplained seizures, a 10 year old diagnosed with prostate cancer), city officials, with heavy lobbying from the oil industry, recently voted against a three-month fracking moratorium that would have invested resources into studying the impacts of fracking operations on health. As one CRPE organizer observed, the experiments on health impacts are now currently being conducted on these children instead. 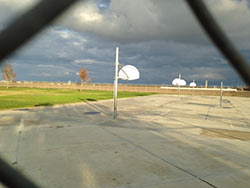 After visiting the school, the tour group headed back to CRPE headquarters to debrief. Pushpa, the nurse from Kaiser San Jose, remarked to the group: "I was reminded today of the work and sacrifice of the generation before us and our obligation to fight just as hard for the next generation to come."

At the beginning of the day, Jennifer said something that later seemed to sum up everyone's sentiments: "The more I get involved, the more I know, and the more I know the more I see the need to be even more involved."

It was a powerful experience.