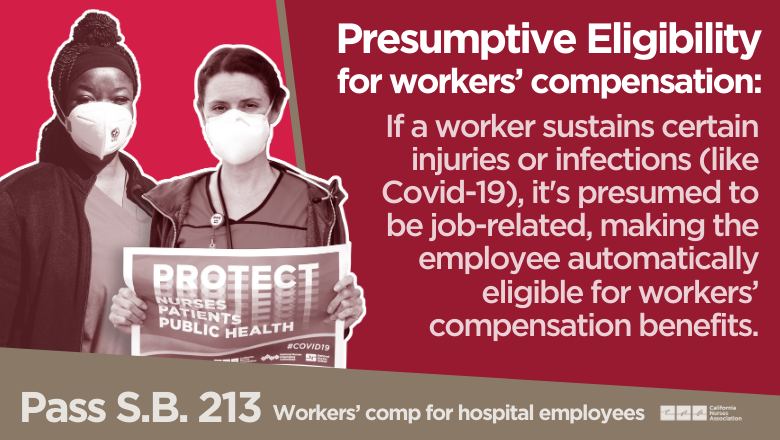 Rose Foronda has done her share of caretaking. A mother of three whose husband has Alzheimer’s, Foronda has been a registered nurse in the ICU at Seton Medical Center in Daly City, Calif. for more than 30 years — one of the core group of Seton nurses to work there that long. Unfortunately, her good work didn’t matter to Safety National, the Insurance provider handling workers’ compensation claims for her employer.

After being exposed to a positive Covid patient in late August, Foronda tested positive in September (along with several fellow nurses), and was off sick for a month. While Foronda feels her employer has been helpful, Safety National has denied her workers’ compensation claim.

“This is the calling that [nurses] have. We know there are risks, but we sacrifice our time and our life for the patients,” said Foronda. “They shouldn’t give us a hard time when claiming compensation for a work-related illness.”

Foronda is not alone. Nurses often have to jump through hoops — while sick or hurt — to receive paid time off for work-related illnesses or injuries. And after all that effort, nurses can be denied coverage.

That’s why we are relieved and proud to cosponsor a state-based solution in California, S.B. 213. Sponsored by National Nurses United affiliate the California Nurses Association and recently introduced by Senator Dave Cortese, S.B. 213 will ensure that nurses and other health care workers have “presumptive eligibility” for workers’ compensation (meaning they will automatically be eligible) if they are injured on the job or fall ill to Covid-19 or any other communicable disease.

These protections are absolutely necessary, and we know they are possible because they already exist, just not for our workforce.

Some states, including California, have laws granting many public safety workers — male-dominated professions such as police officers and firefighters — presumptive eligibility for certain conditions, like lower back pain, Methicillin-resistant staphylococcus aureus (MRSA), and PTSD. In other words, these illnesses or injuries are presumed to be job related, and the worker is automatically eligible for workers’ comp benefits.

Nurses, on the other hand, still have no presumptive eligibility at all, even though our nearly 90 percent female profession experiences many, many known hazards at work, now including Covid-19. According to the Bureau of Labor Statistics, in 2019, workplace hazards that required at least one day off work totaled 120 for Firefighters and 270 for police officers. The total for registered nurses was 20,150. And this was before the pandemic was in full swing; the numbers now are surely higher.

If the disparity in workers’ comp protections sounds sexist, that’s because it is. Of course, our heroic first responders and law enforcement workers deserve all the protections they have. Given the dangers we face, nurses are simply asking for parity. If we are caring for the same patients, exposed to the same illnesses, and experiencing on-the-job injuries at even higher rates, why is our women-dominated profession not protected in the same way?

“It is unconscionable that because nursing is a majority women’s occupation that nurses are not protected as are firefighters and police officers,” said Kathryn Donahue, a now-retired intensive care unit registered nurse in Northern California. In 2010, when Donahue was still at the bedside, she contracted the antibiotic-resistant infection MRSA at work.

ICU nurses like Donahue, whose gloves and gowns are often contaminated with MRSA, face risks similar to firefighters, whose workplaces and equipment have tested positive for MRSA. Donahue, however, had to fight with the insurance company to get her infection covered. They claimed she got MRSA from her dog.

“There is no justification for the California legislators’ sexist choice to deny presumptive eligibility to nurses. Like firefighters and police officers, nurses have a dangerous job” said Donahue.

In 2008, Catherine Montgomery, a registered nurse in the psych unit at UC Irvine Medical Center, was thrown to the ground by a patient, herniating four discs in her spine. Over time, Montgomery needed back surgery. The claim for surgery to relieve her back pain was not only denied, but in the process, the hospital hired an outside law firm to fight her claim, Montgomery has been followed by a private investigator, and her private medical records, including her OB/GYN record, were subpoenaed.

When nurses ourselves are hurt or sickened because of our daily sacrifices, we should all be provided with the security written into S.B. 213. We signed up to care for our patients, not to weather out a work-related illness or injury with no pay.

“I hope the bill will go through,” said Foronda. “It’s not only for us now, but for other nurses coming up — for the next generation of nursing.”