Nurses Condemn Use of Tear Gas on Asylum-Seeking Families 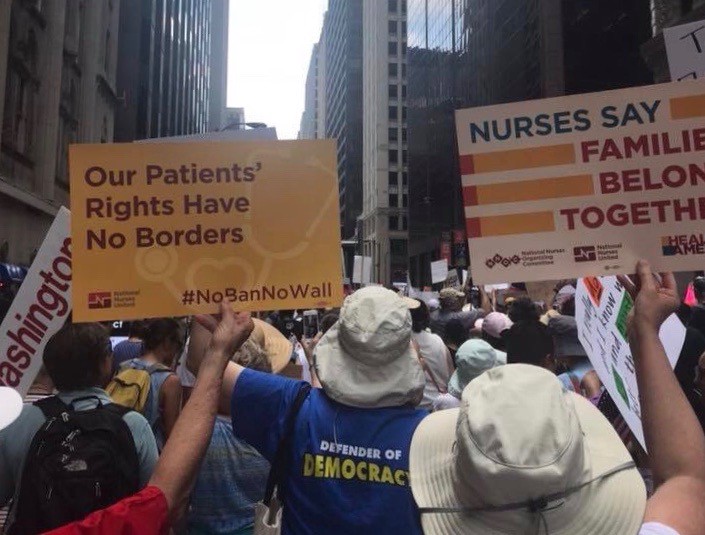 ear gas has been banned in warfare for over 20 years. As nurses, we are outraged that this weekend, U.S. Customs and Border protection agents fired it on children and families.

Vomiting, blurred vision, shortness of breath, coughing, sneezing, tearing, difficulty swallowing, temporary blindness, pain — and in documented cases: death. These are some of the negative health impacts of tear gas, which for over 20 years, under the Chemical Weapons Convention, has been banned for use against those in uniform.

This weekend, in an extreme violation of human rights, it was fired on those in diapers.

Nurses, whose life’s work is to protect and heal, are appalled at the images of mothers dragging their coughing kids away from clouds of toxic smoke, and the reports of babies fainting. We are further outraged that talking heads and U.S. officials have in any way tried to defend the use of tear gas on asylum-seeking families. To clarify why this weekend’s actions are condemned by nurses, here’s more information about the public health impact of tear gas:

Banned on the battlefield

According to Washington Post: ”Despite its ubiquity across the globe and in United States, tear gas is a chemical agent banned in warfare per the Chemical Weapons Convention of 1993, which set forth agreements signed by nearly every nation in the world — including the United States.” In addition to the harsh symptoms mentioned above, tear gas is also prone to winds and difficult to keep to an intended target, threatening anyone in the vicinity.

While there are currently no laws in place to keep it from being used in domestic crowd control, nurses and anyone concerned with public health could argue that there should be. A former border control agent said in a recent news report that pepper spray (although most outlets have reported this weekend’s border incident involved tear gas) was “safe enough to eat on nachos.” Given the slew of evidence to the contrary, we would certainly like to see him try.

Although the specific impact of tear gas on children is not as well documented as the impact on adults, a 1989 study in the Journal of American Medicine found that an infant exposed to tear gas fired into a house by police “developed severe pneumonitis requiring therapy with steroids, oxygen, antibiotics, and 29 days of hospitalization.” A 2011 study by the University of Chile also found that tear gas can harm children in the first few years of life — causing the Chilean government to temporarily suspend police from using tear gas on crowds of protestors.

Nurses know that children, generally, are often more vulnerable to pollutants or chemical exposures because their bodies are still developing. Their exposure is also different, as they are lower to the ground, where some chemicals pool, crawling on the floor, with their hands in their mouth and eyes more often. Suffice to say that both studies and common sense tell us that if tear gas is banned from war, it should never be used anywhere near the tiniest, most vulnerable members of society.

In a Wall Street Journal video, Honduran mother Myrna Lissete Amaya explained that in addition to children, pregnant women were also among the crowd of tear gas victims — which makes the use of tear gas this weekend that much more outrageous.

The same study mentioned above by the University of Chile showed that tear gas can cause miscarriage and harm a developing fetus. In a 2012 report on the use of tear gas in Bahrain, Physicians for Human rights also documented increased numbers of miscarriages in exposed areas, and the United Nations has connected tear gas use to an uptick of miscarriages in Palestinian territories. As nurses who care for mothers and babies, throughout all stages of pregnancy and beyond, we are appalled that border patrol agents would put our patients at risk.

The health of asylum-seeking families is already concerning to nurses, even before they arrive at the border, given that they may already have underlying health issues as a result of their stressful journey to the U.S., through an extremely harsh landscape, as well as from experiencing poverty and violence in their home countries.

As nurses, we take an oath of non-discrimination, so we help and heal all people, period. The arriving families are our patients. RNs condemn any action that would take an already vulnerable patient population, including the elderly, and people with pre-existing conditions — and cause them further harm.

Bad precedent in the era of climate change

Although violence and poverty have been the main focus of news reports on why Central American asylum seekers are arriving at the border, a less talked about driver is climate change. According to the Guardian: “Experts say that alongside [violence due to the region’s Cold War conflicts] climate change in [Central America] is exacerbating — and sometimes causing — a miasma of other problems including crop failures and poverty. And they warn that in the coming decades, it is likely to push millions more people north towards the US.”

To that end, humane solutions that support basic human health and safety must start now. As the Guardian piece points out, one solution would be adding “climate change” to the 1951 UN refugee convention guidelines for granting asylum. Holding elected officials accountable for addressing the root causes of the climate crisis is also critical. Tear gassing everyday people whose crops have failed and who are experiencing extreme food scarcity, due to changing weather patterns, is not a solution that supports public health.

Of course, these are just a few reasons that this weekend’s tear gassing is a public health crisis. Bottom line, however, is that it is also perfectly legal for refugees to apply for asylum in the U.S.

Nurses understand that the environment in which our patients live, the economic conditions that govern their lives, the violence they face at home — all of this is inseparable from their health and safety. If there is no health and safety to be found in their home countries, and they risk everything to reach our border with their families, the last thing these patients deserve to be greeted with is violence.