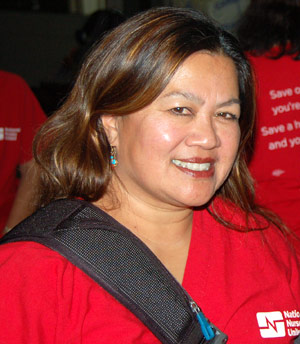 National Nurses United (NNU) board member Jane Sandoval is well aware of the health inequities that exist in her city of San Francisco. “I know that inequality exists”—she says—“because I see it and I work with it every day.” Having worked there as a Registered Nurse for over 32 years, Jane’s resolve to fight inequality extends well beyond the Bay Area. In 2013, she traveled to the Philippines with the Registered Nurse Response Network (RNRN). While treating patients in the devastating aftermath of Typhoon Haiyan/Yolanda, Jane’s eyes were opened to the vast scale of global health inequities.

Jane’s 2013 deployment with RNRN became the impetus for her to enroll in the Women’s Global Health Leadership certificate program offered by National Nurses United in collaboration with Rutgers University. Excited by the opportunity to better understand the relationships between local and global health inequities, Jane applied for a full scholarship (available to NNU members) to take courses in the program. The certificate, which is taught by NNU faculty and offered through the Department of Women’s and Gender Studies at Rutgers, examines the gendered impacts of social and economic inequities on health. To complete the certificate, students are required to take two core courses--Women’s Global Health Movements and Impacts of Economic Inequality on Women’s Health--and five electives. Elective courses explore a broad number of topics including environmental injustice, climate change and health; the health impacts of technological developments in the ‘care-economy’; the political economy of the pharmaceutical and food industries; and the health consequences of skyrocketing debt-all themes that Jane was seeing at the bedside. The program’s focus on “vital issues related to health and healthcare" generates new paradigms of global leadership that extend nurses’ roles as patient advocates into “advocacy for humanity.”

Jane just completed her fifth course of the certificate, “Health Consequences of Global Trade in Food Commodities.” In a recent paper for that class, Jane combined classroom learning and research with her insights as a health practitioner and patient advocate to write an analysis of the novel My Year of Meats.  Her paper explored ways that the food system impacts individuals, communities and national policies. In it she argued that a structural approach to patient advocacy can be a powerful tool for holistically treating the lived impacts as well as the root causes of food-related sickness.

When Jane began the program, she was intimidated at the thought of going back to school and learning the technology necessary for the online course format. Now she laughs as she describes the learning curve as “barely a hiccup.” The courses have helped her hone her understanding of the ways neoliberal political ideologies and policies inform people’s access to healthcare services. Jane has studied the consequences of debt, the erosion of infrastructure, and women’s health movements to better understand health crises and those resisting them. Although she can’t pick a favorite class, she describes them all as “very enriching and valuable” and credits them with her “increased awareness of structural issues and inequities that alter the course of health outcomes.”

The courses’ emphasis on neoliberal austerity measures and issues such as “union dismantling, hospital downsizing, and the jeopardizing of Planned Parenthood funding” resonates with many of Jane’s own struggles as a patient advocate. In 2010, the city of San Francisco planned to tear down St. Luke’s, the hospital where Jane works, and rebuild it in a more affluent part of the city. Reflecting on the struggle to save St. Luke’s as part of her own commitment to provide accessible healthcare, Jane says, “The communities and the union bonded together to say no, this is wrong! There was a fight to keep it open, to rebuild it, so we could continue to serve the underserved.” Seven years later the original hospital is still standing and is in the midst of a complete renovation.

As her community continues to face issues of gentrification and skyrocketing costs of living Jane finds it helpful to connect the local issues her patients face with the global analysis she engages with in her courses. She states, “The local fights are important, of course, because they are the ones you hold most dear but the larger-scale fights are also important, especially in the ways they intersect.” This intersection is what drives her passion to understand structural inequalities, corporatization, and marginalization. As she works alongside patients and other union members to push California and the United States towards a single-payer healthcare system she insists that "we have an obligation to be educated and to educate others about insidious structural violence, marginalization, and negative health outcomes.” For Jane, “Community education, political engagement, and patient advocacy are all part of ensuring access to care and service for everyone.”