Historic rally in Detroit â€” 3,000, led by RNs and community leaders 'Turn on the water.'

Thousands of registered nurses, community, labor, environmental and community activists marched in Detroit today in a resounding protests against the shutoff of water to tens of thousands of city residents – an action the marchers called a wanton violation of human rights that creates a public health emergency. 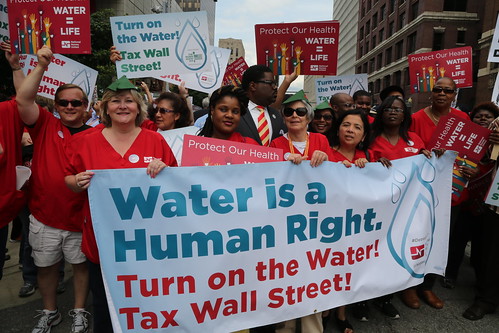 RNs lead the march demanding that the Detroit Water and Sewage Dept. turn back on the water to its residents.

Brandishing signs that read “Water is a Human Right,” “Turn on the Water. Tax Wall Street,” “Water = Life,” “Blame Chase,” “Make the Banks Pay,” and “Nurses are the Real Emergency Managers,” marchers streamed through downtown Detroit to a big rally in front of the city/county building after a stop at a branch of Chase bank.

Their message: Turn on the water. Restore the water for those who were cutoff. Tax Wall Street to raise the money needed to revitalize cities and communities like Detroit harmed by the Wall Street created economic crash of 2008.

And they voiced emphatic opposition to the corporate policies of Michigan Gov. Rick Snyder and his undemocratically appointed emergency city manager who have declared a bankruptcy in Detroit and moved to privatize public resources, such as the water supply. 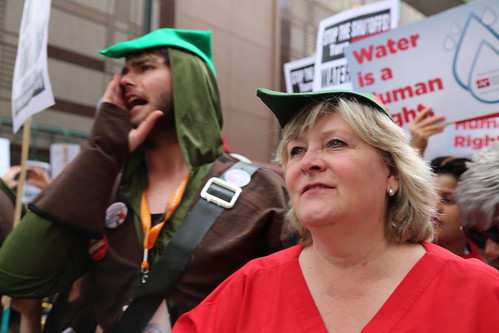 Jean Ross, RN, co-president of National Nurses United, the lead sponsor of the action, delivered a declaration calling the city of Detroit to be a public health emergency zone, supporting the call of numerous city activists of the health crisis prompted by the shutoff.

“Water is life sustaining. Lack of water directly undermines the health and safety of Detroit residents, and their families,” the NNU declaration read.

“For optimal health in our daily lives, we need clean water for drinking. Infants, children, and the elderly are particularly vulnerable; they are more susceptible to dehydration, infection, and disease without access to water. 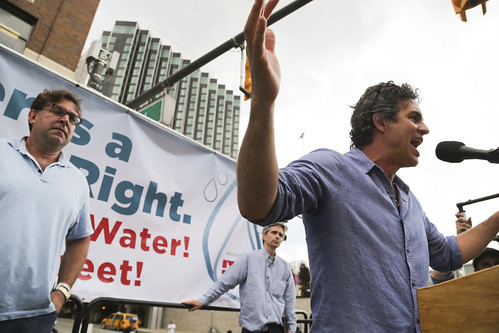 Actor Mark Ruffalo, joining the march, encouraged the crowd to “fight for your rights, water is a human right.”

“We’re happy to send money all over the world to help other people in their crisis, and we can’t take care of our own people. The American people have got to know that this is wrong, and that it’s happening here and that it should be stopped,” Ruffalo said.

Maureen Taylor, Michigan Welfare Rights Organization chair noted “We hold the corporations responsible for this mess. Turn the water on.” 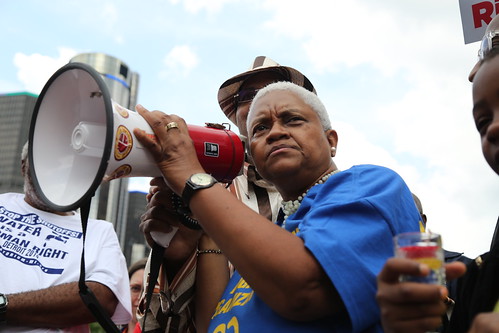 Rep. Keith Ellison, author of HR 1579, the Inclusive Prosperity Act, also known as the Robin Hood tax proposed an alternative. “Instead of shutting peoples water off why don’t we raise the taxes on these corporations? We have a bill that would tax the transactions on stocks, bonds and derivatives so people can meet their basic needs like water.”

“We need to link what’s happening in Detroit with what’s happening across the country,” said journalist and author John Nichols, linking the fight in Detroit to attacks on Social Security, Medicaid, and Medicare. “If there’s a place where the fight must begin, it’s here. “If they deny us water, how can any other right have meaning?” 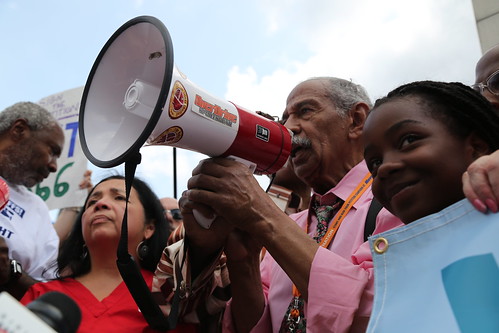 Rep. John Conyers of Detroit presented a message to the city water department to “Keep their paws off our water. Get the corporations to pay off the hundreds of thousands of dollars they owe.”

Michigan Nurses Association President John Armellegos, RN, noted that “Detroit is not bankrupt. Denying water is another sign of a bankrupt system. Only a bankrupt system would encourage predatory subprime mortgages that lead to the foreclosures of over 100,000 homes in this city and deny opportunities for work when so much is needed in this city. This city, state and nation must engage in policies that promote prosperity and recovery.” 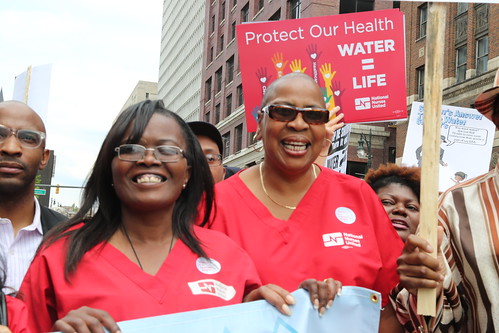 “Privatization of water has already started harming Michiganders,” said We the People of Detroit Founder Monica Lewis-Patrick. “This issue is beyond Detroit. Detroit is the tip of the spear. It’s not about one thing. It’s about everything. As goes Detroit, so goes Michigan and so goes the nation. Stop the privatization. Restore the water.” 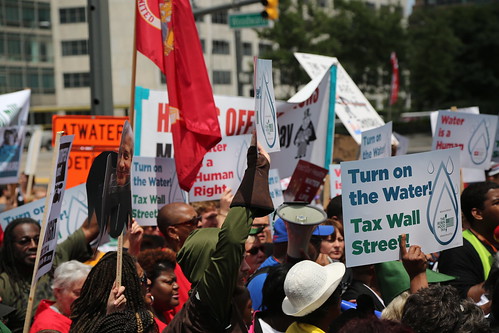 View more photos of the rally and march >>