Hereâ€™s how to send a message to Big Pharma 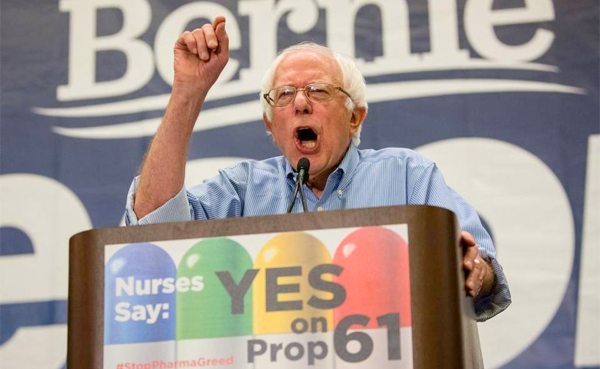 During this election season, Californians have been relentlessly carpet-bombed by TV ads paid for by three dozen super-rich drug companies to defeat Proposition 61.

To date, the drug industry has raised an obscene $126 million to fight Prop. 61, the biggest war chest ever amassed in a ballot measure battle in California’s history.

Normally, numbers like these would be cause for pessimism for those of us who believe that drug industry price-gouging is a blight on our nation and that Prop. 61 is a strong prescription for treatment.

But in my visits to California. I’m finding much reason for hope. I am encouraged to believe voters will embrace Prop. 61 on Tuesday and send a powerful signal across the nation that the days of unchecked drug company greed are numbered.

Today no laws prevent drug companies from doubling or tripling prices. So they just do it – and get away with it. The soaring cost of medicine is a major crisis and a moral issue. A survey just released by the Kaiser Family Foundation found high drug prices were the No. 1 health-care concern of 74 percent of Americans.

We pay the highest drug prices in the world. Last year, nearly one in five Americans between the ages of 19 and 64 – 35 million people – did not get their prescriptions filled because they did not have enough money. Many of those patients will get sicker and some will die.

Meanwhile, the five largest drug companies made more than $50 billion in profits last year. And in 2015, the top 10 drug company executives received $327.4 million in compensation.

The EpiPen, a staple in the medicine cabinets of tens of millions, became a symbol of this avaricious cycle. Its manufacturer, Mylan Inc., increased its price by 461 percent between 2007 and 2015. Mylan CEO Heather Bresch’s pay increased 671 percent in the same period. Outrageous

But this whole system – despite a lot of hand-wringing by less-than-courageous editorial page writers and politicians – doesn’t just survive, it thrives.

How is this possible?

Currently the drug companies have 1,266 lobbyists on their payrolls in Washington, D.C., and 118 in Sacramento. They’ve made hundreds of millions in campaign contributions. Just this year, massive pharma lobbying efforts killed two bills in the Legislature that would have made modest steps toward drug-pricing transparency.

Fortunately, California has activist organizations such as the California Nurses Association, the California AARP and Consumer Watchdog that have taken a reform agenda directly to the voters through Prop. 61.

Prop. 61 is a common-sense reform. It ties the prices that the state of California pays for drugs for about 6 million patients, including Medi-Cal recipients and active and retired state employees, to the prices that the Department of Veteran Affairs pays. The department pays about 20 to 26 percent less than what most government agencies pay. Those are significant savings that will make drugs more affordable and accessible to more people.

The drug industry argues that only about 12 percent of Californians will benefit from Prop. 61. Not true. All taxpayers will save about $1 billion a year. One of the industry’s biggest lies about Prop. 61 was debunked – that it would it would increase what veterans pay for drugs.

The nation is watching California. When Prop. 61 passes, I predict the revolution against drug industry price-gouging will sweep across the country like a prairie fire.

Bernie Sanders represents Vermont in the U.S. Senate, ran for the Democratic presidential nomination this year and will be appearing at rallies in Los Angeles and Sacramento on Monday. He can be contacted at press@bernie.org.