With great fanfare this week, the Washington Post reports that United Healthcare plans to keep key consumer provisions of the Patient Protection and Affordable Care Act no matter what the Supreme Court rules about the individual insurance purchase mandate.
From the June 10th WP article:

Officials at United Healthcare will announce Monday that whatever the outcome of the court decision — expected this month — the company will continue to provide customers preventive health-care services without co-payments or other out-of-pocket charges, allow parents to keep adult children up to age 26 on their plans, and maintain the more streamlined appeals process required by the law.

United Healthcare would also continue to observe the law’s prohibitions on putting lifetime limits on insurance payouts and rescinding coverage after a member becomes ill, except in cases where a member intentionally lied on an insurance application.

It sounds so, well, friendly and reasonable, doesn’t it?  But read it again and then I want to tell you what that really says to America’s patients and to United Healthcare’s policyholders.

Even as United Healthcare’s announcement started making the national news, some of its policyholders were seeing the realities of the fine print. And those realities of the for-profit healthcare business are written in the blood of our children. 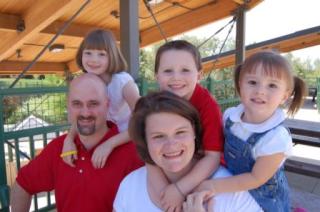 I have known Nathan Wilkes of Colorado and his family for a little more than five years now. I read about the family first in the newspaper and even took that article with me to Cuba as I was so angry that a story about Anna Nicole Smith’s body transport made the front page of the paper while a healthcare horror story was deep inside. I didn’t meet Nathan in person until we were both on the capitol steps in Denver as I introduced Michael Moore before SiCKO premiered in 2007, and Nathan spoke about the trauma his own young family faces as they try to make sure his son, Thomas, has access to the care he needs for his hemophilia. As you might imagine, it has been a struggle.

Nathan is a brilliant and hard-working young man who started his own company and secured healthcare coverage through that company after exhausting many other avenues for keeping his family covered for care. He knows the agony not only of watching his insurance costs soar but also those of the companies for whom he has worked and other families who had to be covered under plans that also included the Wilkes family. The insurance he eventually secured was through United Healthcare.

Nathan and I saw each other again through the years as he would travel to DC to advocate for those with hemophilia and as we both advocated for a transformed healthcare system under a single-payer model. Once some time ago when I was asked who I thought might have faced bumping up against lifetime caps on insurance coverage and who could do a nice job introducing President Obama as he visited the Western slope of Colorado during the height of the health reform debates in Congress in 2009, Nathan immediately came to mind and he did a fine job.

But just because I have had the honor of working with Michael Moore and Nathan has had the honor of meeting and introducing President Obama doesn’t mean we both don’t continue to share the bond of continuing to confront brutal realities at the hands of our for-profit insurance companies.

Just this week as now 8-year-old Thomas was facing a health crisis and the Wilkes family was dealing with that crisis, Nathan got a letter from his insurance carrier, United Healthcare. It told him that the insurance giant was auditing the company’s coverage and required additional documentations (tax forms, income statements, etc) and that unless the documents were provided and found satisfactory, the business’ insurance coverage would be terminated July 1, 2012. While that was awful enough, Nathan then began hearing from the family’s medical providers that United Healthcare went to all Thomas’ healthcare providers and informed those providers that the family’s coverage would be cancelled on July 1.

Imagine that. Your child is hospitalized. Your insurance company doesn’t like that your child is hospitalized and needing care – again. So your insurance company begins to find ways to terminate your coverage for good – like trying to find that one piece of documentation on your application for coverage or your company’s application for coverage that fits their warning as stated in the WP article, “except in cases where a member intentionally lied on an insurance application.”

Let’s not be foolish. United Healthcare will always find a way to make money and doing so will mean aggressively finding ways to cull those who need healthcare from the ranks of their policyholders. And even as they are announcing to the world that they’ll be so consumer-friendly as to retain some provision of the new healthcare law, they are simultaneously working to end the coverage and maybe even a chance at life for one beautiful little boy in Colorado.

Shame on you, United Healthcare and other health insurers who do the same things. And shame on us all if we do not get on with the business of making sure we have a sane and solid healthcare system under an improved and expanded Medicare for all for life model. The nurses of National Nurses United will be on a statewide Medicare For All Bus Tour in California starting next week, and I’ll be with them. No matter what the Supreme Court decides, we cannot let any more insurance company contract fine print be written in our children’s blood.