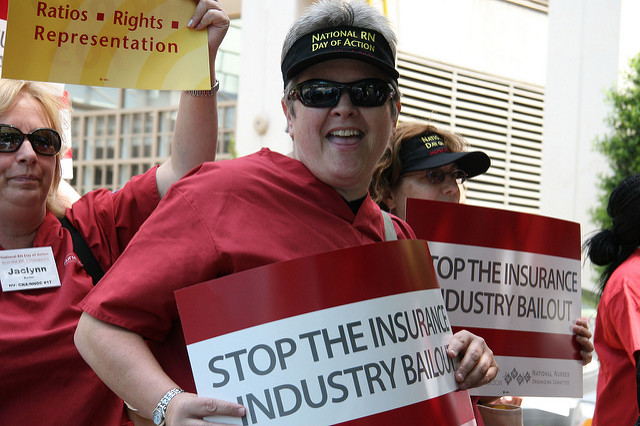 It’s hard for most of us to imagine a lifestyle supported by a $73 million retirement bonus.  It’s even harder to imagine a whole nation’s healthcare controlled by those who have benefited so wildly from denying healthcare to those who need it.

But Cigna’s Edward Hanway knows well what it feels like to rest in the lap of luxury thanks to all those profits he helped secure as he led one of the nation’s for-profit insurance giants through some very successful times.    And as we lumber toward a new piece of healthcare legislation with new promises of expanded health insurance coverage and mandate for both individuals and employers to purchase private health insurance plans, insurance companies will have even more control over our healthcare – and the denials of care that make companies like Cigna pay out such obscene bonuses.

For those who wish to read the full news report (sub. req'd) click through, but here’s a bit of the story:

According to CIGNA’s press releases, Hanway had served in leadership capacities with America's Health Insurance Plans, and the Alliance for Health Reform. "He is an outspoken advocate at the national level for greater transparency regarding health care quality and cost information available to consumers and a strong proponent of national quality standards for health care providers. He is recognized as a leader in the effort to improve the quality, accessibility and affordability of health care in the United States. Through the years, Hanway has been active in a wide range of issues and initiatives associated with health, education and international business."

BEFORE you read further...National Nurses United, the new national union for RNs, is asking nurses and patients to demand Congress remove the mandates that would force Americans to purchase products from the CIGNA's of the world.  Call Rep. Pelosi (415-556-4862) and Sen. Reid (702-388-5020) and tell them to strip this bill of the CIGNA-mandates immediately!

Under Hanway’s leadership, Cigna also did what for-profit insurance companies do so very well to enhance the profits that become multi-million dollar bonuses.  They denied care to thousands upon thousands of policyholders, and the company profits were protected.

But some of those denied care died as a result.  Nataline Sarkisyan was but one.  She was 17.  She needed a new liver.  Cigna said no until enough nurses and enough of the family’s friends and neighbors – and a few thousand concerned citizens – protested loudly enough to make some news coverage.  Then Cigna reversed itself.  Even in the face of Nataline’s impending death, Hanway did what he felt was best  to do to minimize damage to Cigna – not to save a teenager’s life.  The negative PR became a bit much.  Wendell Potter, who worked as Cigna’s communications director at the time, has said since that he watched the whole mess unfold and was one of the people advising Cigna’s leadership to reverse the denial.

But the reversal came too late.  Nataline died.  December 20, 2007.  And for her mom and dad, no Christmas will ever be the same.  The Sarkisyan’s buried their only daughter while wrapped in the love and support of their Armenian community, the nurses of the California Nurses Association and thousands of bloggers and others who tried to somehow ease the unimaginable.

Nurses do not want to stand in hospital lobbies protesting with terrified families who are begging insurance companies to approve care.  Nurses do not want to stand next to mothers and fathers, brothers and aunts at funerals for those who might have been saved if not for the delays and denials of care that insurance companies find so routine.  Nurses want to care for patients, and nurses wanted to care for Nataline.  Instead, they were left with caring for those left behind.

This year, on December 20, 2009, the Sarkisyan’s marked the anniversary with a church service and reception at their home.  Liz Jacobs, RN, attended and recalled all the emotions of two years ago as they co-mingled with the images of a family very much still grieving.

The church was filled with hundreds of friends – almost all dressed in pink, Nataline’s favorite color, except for Hilda Sarkisyan, Nataline’s mother, who wore all black.  Many thought back to that day two years ago when the family stood protesting and fighting in a hospital lobby – begging for their little girl to have a chance at life – rather then being at her bedside in what would be her final hours.  Many felt grief about how close they all came to saving her life.  Close, but so far.

No doubt, Edward Hanway’s family did not spend that day or that holiday season as the Sarkisyan family did nor did they spend this December 20th in the same fashion.  Retiring with $73 million makes scenarios like that forced on the Sarkisyan’s lives much less likely.

At this year’s memorial service, RN Jacobs noticed Nataline’s friends who had been so supportive and so involved in the protests to save their friend when they were all 17 years old are now moving on with their lives.  All them are going off to college and starting their lives at 19 while Nataline’s family will never know if Nataline would have been in fashion design school, as she dreamed, or on to another aspiration.

Yet in the midst of her grief, Hilda Sarkisyan stands firm in telling all in her community and all she touches that left as things are right now, the insurance companies will continue to do this to more and more Nataline’s.  There is nothing that will stop them.

Not in these United States and not in the highly touted health reform legislation.  Our healthcare system is not the best in the world.  This chart from National Geographic gives us more reason, as if we needed more, to worry for our patients and for our nation.

But today we mostly wonder what that great, big bonus might have done in terms of healthcare.  If Nataline’s liver transplant was to cost an estimated $70,000, one-tenth of one-percent of Hanway’s bonus would have covered Nataline’s chance to live.   And that’s not the company’s total profit by any means.  That’s just Hanway’s retirement bonus.  $73 million dollars.  More than 1,000 Nataline’s might have been saved by that $73 million.

Nurses know there is a better way to spend healthcare dollars than on obscene retirement bonuses.  And until there are no more hospital lobby protests or  premature funerals for patients who might have lived if not for the profit and the greed of the insurance CEOs, retired CEOs and shareholders who do not stand at the bedsides of those to whom they deny, the nurses will fight.