Close to Home: Why nurses are voting yes on Prop. 61 â€” to lower drug prices 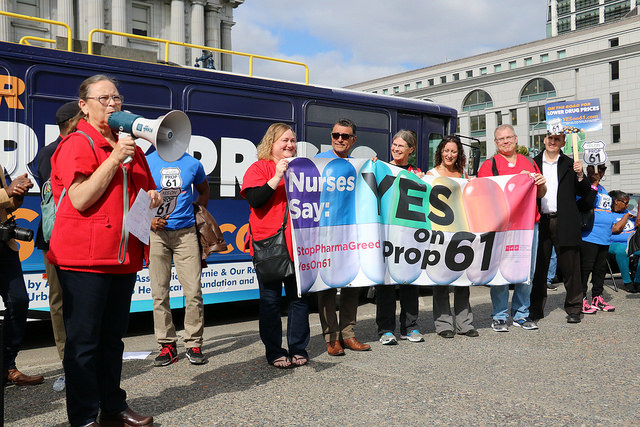 It’s time we put our health ahead of the huge profits of the big drug corporations. That’s why nurses are urging a yes vote on Proposition 61 to lower prescription drug prices.

Here’s how out of control the drug giants have become. Novartis agreed to a $35 million settlement for improperly pushing Elidel, a prescription skin cream, for infants under 2 years old despite warnings it could cause cancer. Gilead Sciences markets Sivakdu and Harvoni for patients ravaged with hepatitis C. They are so expensive, $1,000 a pill or $84,000 for a 12-week treatment course, states are now rationing them for patients they cover on programs like Medi-Cal.

A congressional investigation concluded there was no justification for the high price and that the company’s sole concern was maximizing profits even though Gilead knew “the price would put the drug out of reach for many patients and cause ‘extraordinary problems’ for public health programs.”

Nurses see the consequences every day: parents who face homelessness to continue cancer treatment for children, diabetic patients admitted to the hospital with elevated blood glucose levels because they couldn’t afford their medications while insulin prices have soared. All to protect profits that exceed an unimaginable $1.6 trillion for the world’s top 50 pharmaceutical companies the past two decades — while one in 10 Americans, according to the Centers for Disease Control, don’t take their prescribed medications because of cost putting their health at grave risk.

With those profits, the drug companies have been able to intimidate lawmakers into blocking any reform of drug prices — including two modest bills in Sacramento just this year that would have required more transparency but would not have cut the price of a single drug. Since 1998, the pharmaceutical industry has spent $3.4 billion in federal lobbying, nearly twice as much as even the oil and gas industry.

That wealth, which we all subsidize with inflated drug prices, is also what has fueled the $110 million the drug giants are now spending on a deceptive campaign about Proposition 61 such as the fabrication that prices for veterans would climb if Proposition 61 passes. But, as Sen. Bernie Sanders, a Proposition 61 supporter notes, “veterans’ drug co-payments are fixed (by law) and do not rise even if drug prices go up.”

Proposition 61 would begin to correct the injustice. It directs the state to pay no more for patients it covers than the same prices paid by the VA for the same medications. That could cut prices by up to 40 percent and produce billions in savings for California taxpayers.

By now, most everyone has heard about EpiPens, a basic medication for people with severe allergic reactions to peanuts or bee stings, whose price has shot up 461 percent over the past seven years, during which the CEO of EpiPen manufacturer Mylan, Heather Bresch, was handed a 671 percent compensation hike to $18.9 million.

She should meet Kathleel Hallal, the mother of three boys who need EpiPens. “Mothers go to the drug store with coupons and insurance cards hoping they can afford the EpiPens their children need to save their lives if they’re exposed to an allergen. I’ve heard many stories of mothers leaving the pharmacy crying because the final amount is unaffordable to them, and they are forced to choose between basic necessities and life saving medications for their children,” says Hallal.

Proposition 61 would begin to right these immoral pricing practices and send a message to the big drug companies that even if the legislators won’t act, the voters of California will.

Deborah Burger is a registered nurse, co-president of the California Nurses Association and a Sonoma County resident.